Menu
You are here: Home / The Year of Joy / People Gifting Cadillacs

Mr. LBB said today that he thought if I could have a yard sale every weekend I would. And, yes, I think I would. 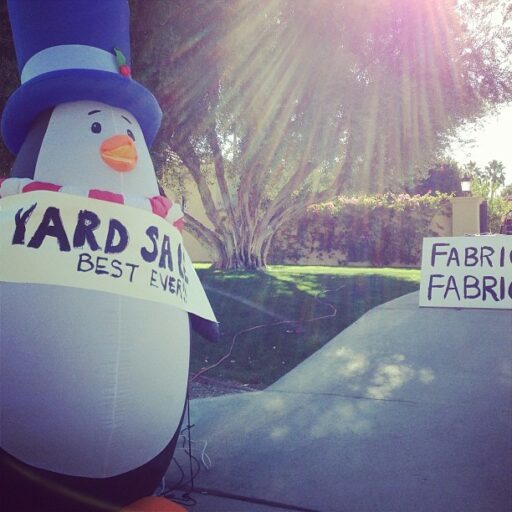 How could anyone resist my penguin....

My friend Megan showed up for support yesterday and I loved the way she described the day afterwards:

So many lessons to learn in letting go.
As well as giving and gifting.
Some are so grateful to find a great treasure at any cost.
Some prefer to ask to take half of the already awesome prices…just because.

However favorite of the day:
Lady: Do you have any rings?”
A: No, the jewelry went early.
Lady: Well how about you go inside …go get your rings inside.
She was serious.

A yoga instructor.
A tennis player from Finland and his wife. I let them pick fresh lemons from my tree.
A radio talk show host.
A doctor who treats veterans for hearing damage caused by war.
An internist visiting from Chicago who has a house just down the street.
A woman who searches yard sales to add to her 1,800 rings she’s collected.
A mobile car washer who drove a vintage Cadillac. He used to wash the Cadillac, until the owner gave it to him, as a surprise.
An artist.
The nicest couple who drink Kangan water. They even offered to let me come and fill up water at their house.
A neighbor whose mother’s house had a squatter. He noticed only when a TV satellite went up in the front yard.
A car dealer.
A sweet woman with her young daughter who is learning to sew.  We took a photo.
A lady whose sister builds fairy gardens, and a year before had given us an energy audit on our house.
A woman who does Japanese Kumi braiding.
A woman whose husband was the quarterback for the Oregon Ducks in the 1960’s.
A man from L.A. who is an expert in vintage toy banks (so he gave us a free “Antiques Road Show” analysis.)
A guy who said he robbed his kid’s piggy bank to buy a putter and paid with an 1884 silver dollar.
A man who tried to buy my paintings…but said he was going to paint over them.
A couple who switched the tags on everything they bought, with cheaper tags. I noticed but let it go.
A young lady who indirectly asked if we might have a spare room to rent her.
A elderly lady visiting from Oregon who forgot to bring a sweater. She bought mine.
A daughter buying fabric to ship to her mother across the country.
A woman with broken toes who I’d just met a week earlier as we helped an elderly man back to his house.

All strangers paying a visit.

The man with the Cadillac told me the whole story of how he got that car. He had washed it for years in his mobile car wash service.  One day he showed up to wash it and the owner said he was giving it to him as a gift. The car washer said he was so humbled by the generosity, but that he then had to ask the man to go to the DMV with him because he was sure that they would think that he had stolen it. He said a Hispanic man showing up with a “free” Caddy in this area wasn’t likely to be a believable story. I could tell this man was honest to the core. I stood there for a few moments just wishing non-judgement for this man.  And then I wished that people-gifting-Cadillacs was a more prevalent story.  I asked him to stay put and had him repeat the whole thing to Mr. LBB.

We sold a lot of stuff, we gave a lot of stuff away. I had a huge “FREE” pile that I kept replenishing. But mostly the whole experience was entertaining and fun because of the people that showed up.  I loved when people said:

We saw your penguin and decided to stop.

This afternoon, as this one man was leaving I tried to offer him a vintage Sports Illustrated:

Me: Here, take it.
Man: Why don’t you sell it on eBay?
Me: I’d rather give it to you.
Man: Really, I don’t need any more stuff.
Me: Me either, that’s why all of this is for sale. It’s just stuff.
Man: You are very young to have come to that conclusion.
Me: Yeah, well….sometimes I feel old.

He just stood there staring at me for a second with his car door ajar.  For a second I felt like he looked familiar, like maybe I knew him from somewhere. Maybe I did. It looked like he wanted to say something but then thought better of it. Finally he just said:

Take care of yourself kid.

I don’t know why it struck me but it did. It kind of reminded me of that scene in Benjamin Button:

Daisy: You’re so young.
Benjamin Button: Only on the outside.

Maybe it’s that he used the word “kid” in an endearing way…and he was just a stranger visiting my yard sale.

There is one all-important law of human conduct. If we obey that law, we shall almost never get into trouble. In fact, that law, if obeyed, will bring us countless friends and constant happiness. But the very instant we break the law, we shall get into endless trouble. The law is this:
Always make the other person feel important.
-Dale Carnegie

Have a yard sale. Or just give some stuff away. Acknowledge, greet and meet the strangers that pay you a visit. I recommend refreshments and door prizes too.

Day 2: A Bigger Target: Focus changes everything. Our goal in life should be to be much, not to have much.

Day 3: Make Room for Joy: Quit Something Every Thursday: So how do we become deep people? Don’t let time fillers dilute your life, intrude and thin out your joy.

Day 4: Availability is the Greatest Ability: I so often think I’m available, but really my mind is wandering around in the margins of life.