Menu
You are here: Home / Sixty One Park / Things We Found in the Old Farmhouse

The guys started pulling down the walls last week in the farmhouse. It kind of looks like a bomb went off. This is the view from the master bedroom towards the sitting room and staircase. That brick was taken out yesterday…it was an old chimney but it wasn’t supported at all from the foundation. We are saving the brick to reuse in some other way: 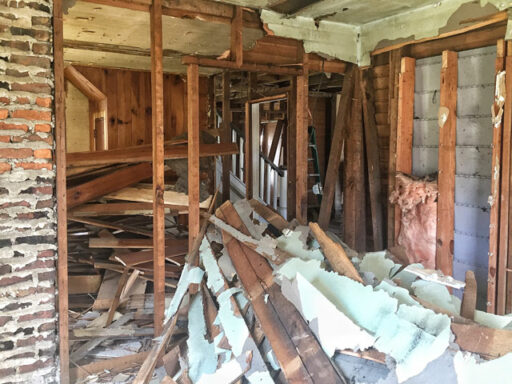 Here is Brett breaking through the wall from the living room to the kitchen on the first day of demo. Jaime is filming. They are wearing heavy duty respirators so you can barely hear them, but I love how much fun they have…and I’m glad they like demo because I can’t stand it. Look at all that awesome wood underneath that drywall and wallpaper:

Here’s the after photo after breaking through. As we go we are just starting to find out what lies beneath the surface: old doorways covered up, old leaks, old chimneys, layers of textiles. There was an addition added to the kitchen long ago and you can see the old Johns-Manville Spintex insulation bags to the left. That’s the original wood siding of the house just to the right of it. Reclaimed beadboard must have been used to patch up the wall next to it and we opened up the wall next to that. We are going to leave the exposed brick chimney that used to vent the kitchen’s wood stove and the living room’s coal stove: 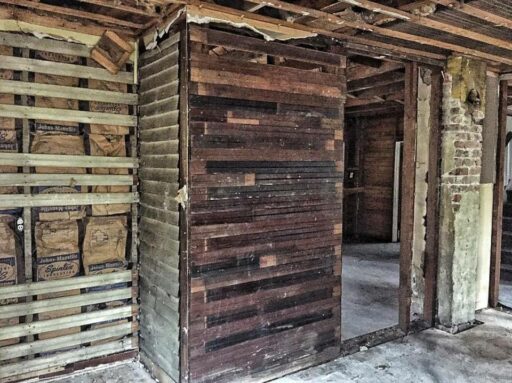 We are starting to think it’s probably a lot older than we thought. Originally 1945 was thrown around but Mr. Plott said that the house had already been built when they moved in around 1942. The wiring in the house was still the old knob-and-tube which dates to about the late 1930’s. The fuse box had been covered over by a cabinet. This is the bottom of the second floor from the dining room…all the wood looks like it is a mixture of milled lumber, reclaimed wood from some other project, and pretty much whatever they could get their hands on at the time:

We found layers upon layers of old flooring. The photo below is from the old kitchen floor where the house was added on to. There are two layers of linoleum tile (1950’s and 1960’s) and two layers of vinyl flooring (1970’s and 1980’s) so maybe the renovation was done around the 1950’s? 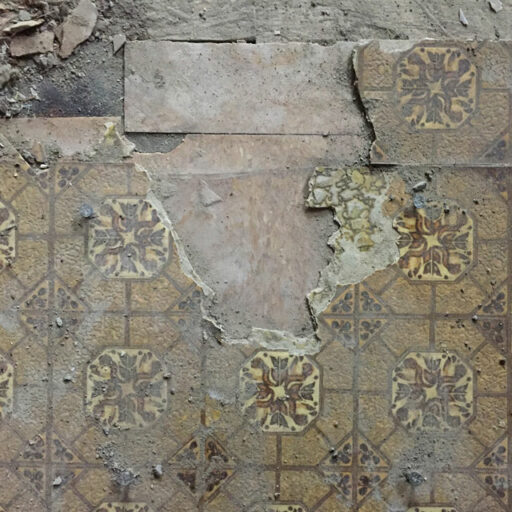 Here’s what the kitchen floor looks like as of yesterday…it’s just dirt. Pretty much everything had to come out. Years ago someone added on here and tried to fix a leak…hence the newer boards and concrete block on the left: 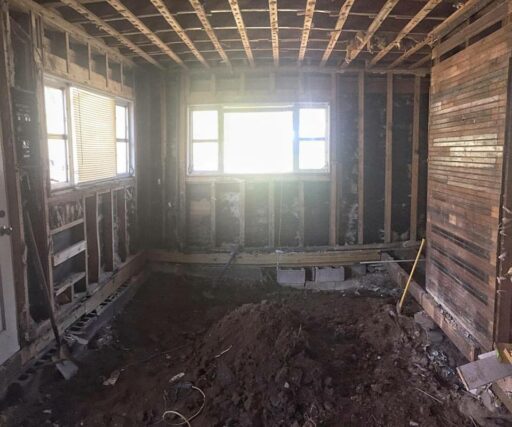 The good news is that removing the floor will give us a chance to pour some new concrete footers…to replace the stacked rock foundation. Jaime knows what he is doing. I just watched yesterday as he dug up all the old pipes in the floor…then I offered to go for a coffee run. He wants to jack up and level out the house a little and make sure it’s going to stand for another century…all the easy stuff right? That’s going to give us a good start to the project. Yes, the center of the house is currently standing on these: 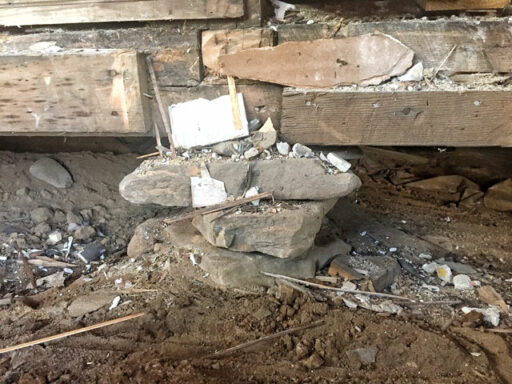 Most people might be crying just about now with a project like this. This is not a flip…we are in this for the long haul. I love digging through the layers of history and putting a story to the bits and pieces. It’s like being one part historian and one part archeologist. Houses hold a little bit of everyone who has ever passed through. We could easily tear this old place down and quickly build a new, larger structure…but then years of history and character would be wiped out. It takes patience and imagination to preserve and learn from the past…and hard work to share it with others. I’m so happy to have found that there are other people that share our love of old things. I live for this stuff. I mean you would have thought it was Christmas when I found a can of tomatoes still sitting on the shelves of the root cellar. I’m very easy to please: 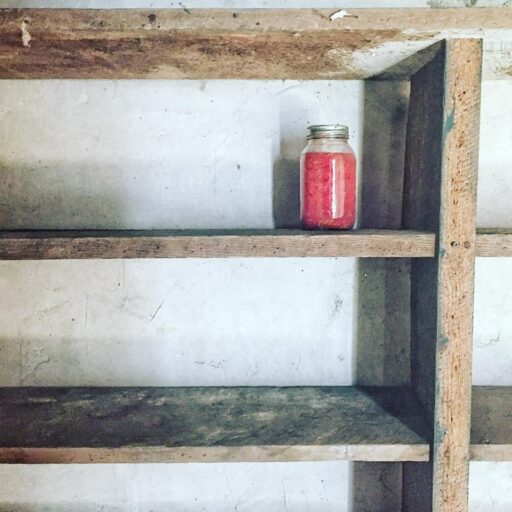 This is the dining room. Someone had recently made this room into a large bathroom/laundry room. All of that was removed right away. That was the easy part. This room will go back to being a dining room once everything is braced and made structurally sound. (Note: We’ve also gone through a whole lot of respirators due to coal dust!) 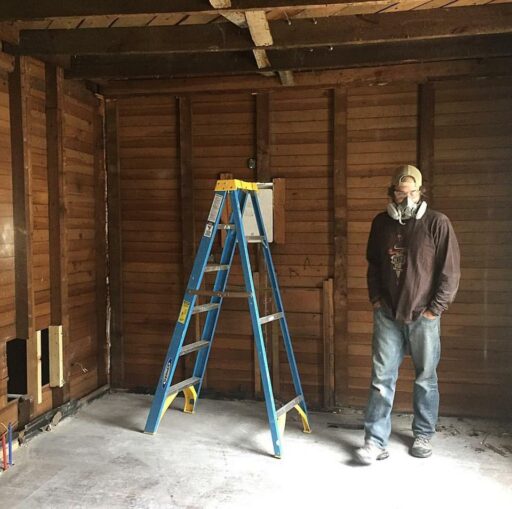 This might be one of my favorite finds…wallpaper found in the sitting room between the downstairs bedroom and bathroom. Any guesses as to what year this might have been installed? I was thinking maybe 1950’s or 1960’s. I was able to salvage a huge piece of it and I’m going to frame it to hang back in the house when we are finished: 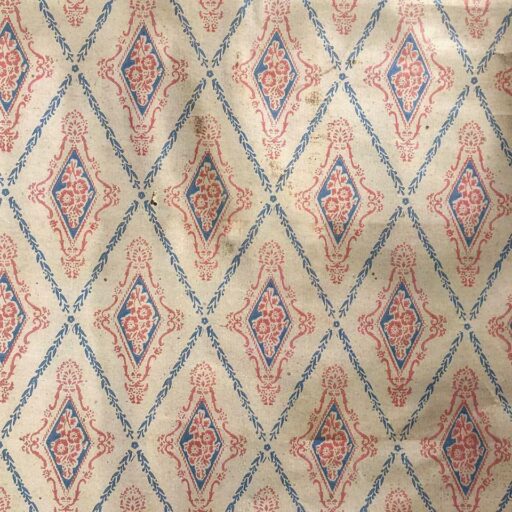 I have a whole bucket of things I’ve collected as we go…things left behind and discarded throughout the years. Below are just a few things found so far. I love when people recognize the items on social media when I post them and tell me what they are. Like what I thought was a cursive “B” is actually a “C” from an old Corvette. Someone else commented that the bullet is “a .22 Long Rifle round (still loaded), and the “needle” is a gun cleaning attachment. You thread the end onto the cleaning rod and put a patch in the eye to pull it through the barrel.” I was cleaning up some metal stakes around the old barn/shed behind the house the other day and noticed painted wood underneath my feet. Then I saw the lock and knob hardware and realized I was standing on an old door: 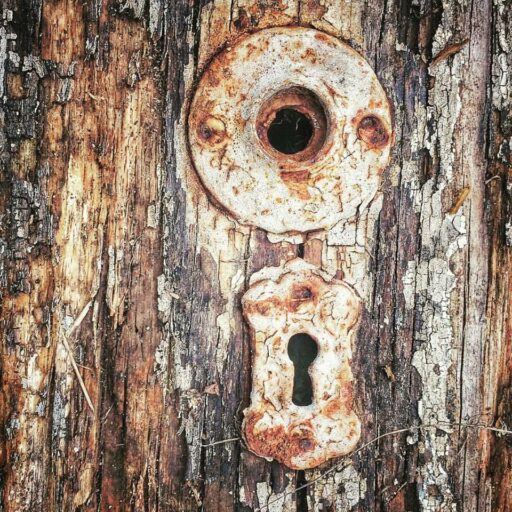 There’s a lot to share and I don’t want to overwhelm anyone so I’ll wait to post the rest. Wait until you see the upstairs!

I’ll be posting photos of the restoration and history as we go, but to see the progress real time and for updates on when we might actually start taking reservations check our the Sixty-One Park Facebook Page and Instagram page!