Menu
You are here: Home / The Old Depot Project / Leveling for the Picket Fence Garden

The Old Depot Project is underway with a master plan: 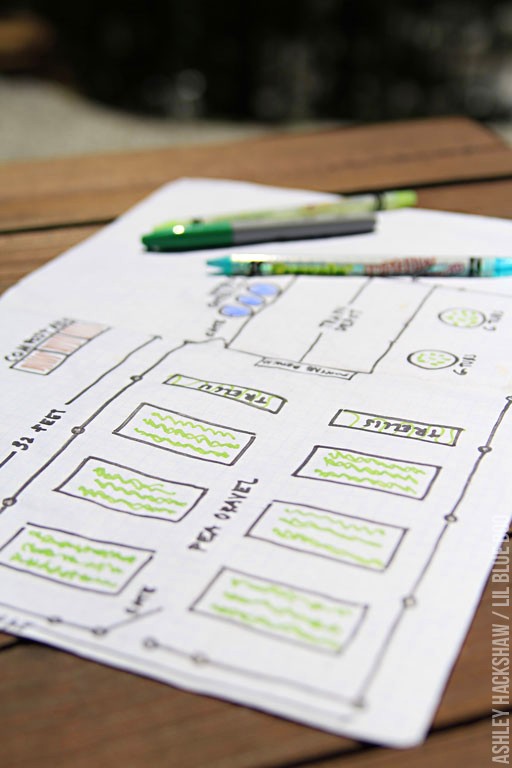 The first step of our project was to prepare the area for the garden and fence because the depot sits on the edge of a hill on our property. The rectangular area that I wanted for the garden actually dropped about 2.5 feet from corner to corner but my preference was to have a level fence all the way around (i.e. not tiered). This meant that we would have  to level the dirt enough that there was still drainage but so there wasn’t a huge gap under the downhill section of the fence. At first this didn’t look like it was going to be an easy task, our dirt is hard packed red clay: 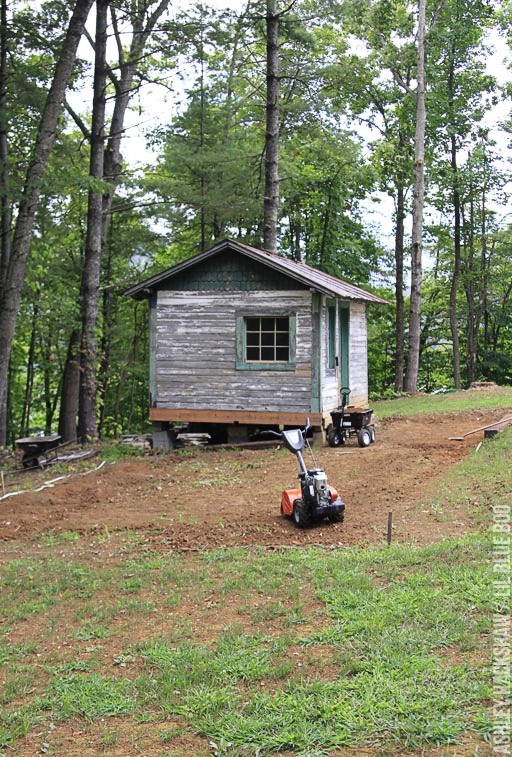 I thought maybe we needed some heavy machinery and asked around to see if anyone had a small earth mover. A friend was willing to come out and help but we would have to wait a few weeks and I’m really impatient.  We decided it would be just as easy to do it ourselves with a little elbow grease and it actually wasn’t nearly as bad as I thought it would be.

First, we borrowed a tiller from a friend and tilled up as much of the top soil as possible to move it to the back corner: 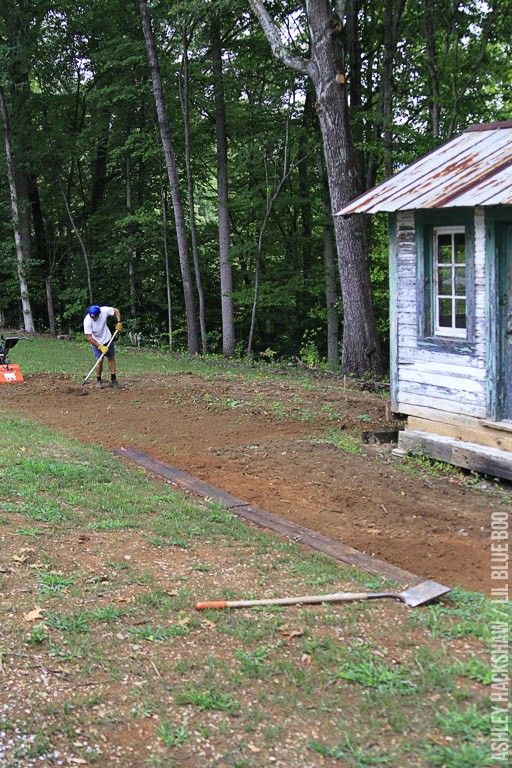 These are my four must-have tools for moving large amounts of dirt with minimal effort:

1. Use a post hole bar. This is your best friend. It weighs about 16 pounds and will break dirt away from the ground just by dropping it.  It looks like this and typically comes in 69″ or 72″ length. 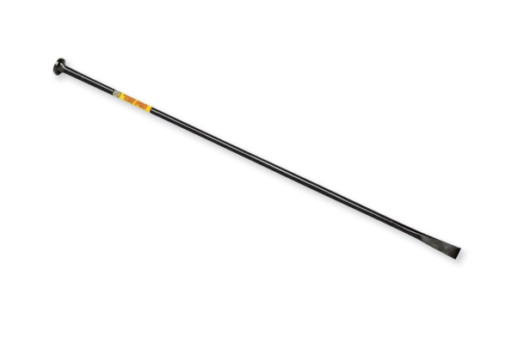 You can come at the dirt from the top or any side angle. The bar works wonders for shaving off small or large amounts or hard packed dirt. It also loosens rocks and cuts roots with one shot. The great part is that the bar has multiple uses for other things like lifting up heavy logs or prying out large roots (remember your physics classes on force?). 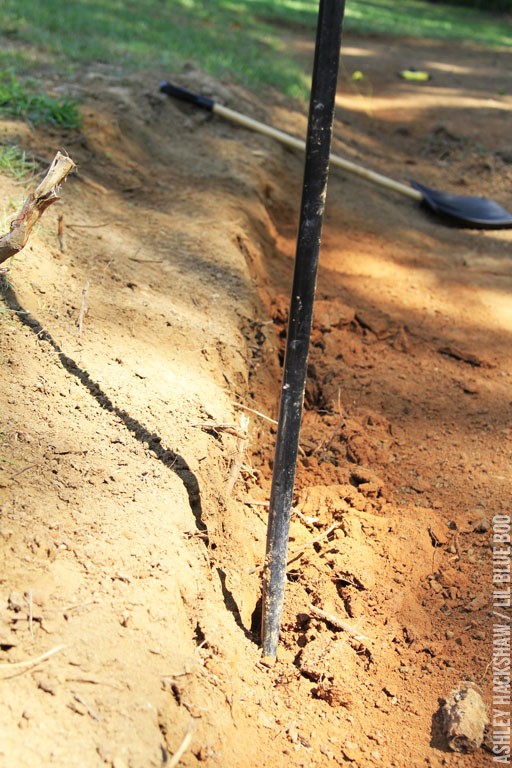 2. A metal garden rake: Use this to rake all the loose dirt into a long, short, continuous pile. 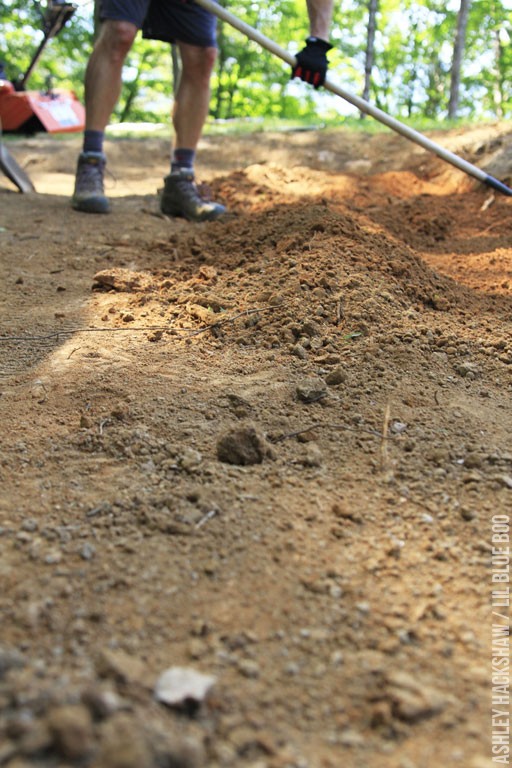 3. A snow shovel. Seriously a snow shovel is your best bet for moving dirt for three reasons: it’s lightweight, wide, and thin.  The result is that there is very little resistance when shoveling. Why work harder than you have to? 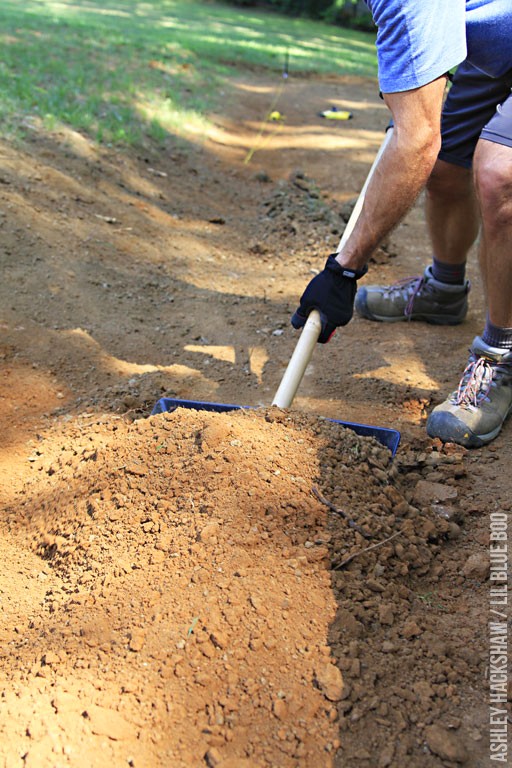 4. A Gorilla Cart: We have a wheelbarrow but I prefer the Gorilla yard cart with the dump feature.  It is easier to pull heavy loads because of its 4 wheels, and it works like a miniature dump truck.  You can also tow it behind a 4-wheeler or riding lawnmower if you have one: 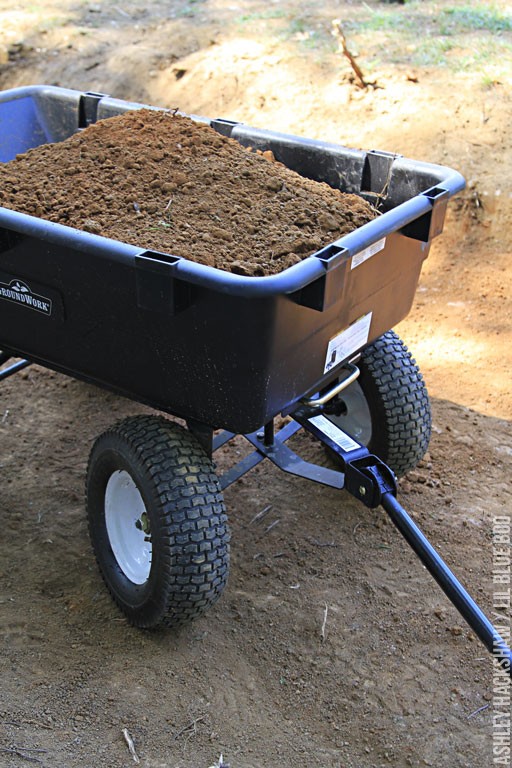 So with those four tools it only took us two mornings to completely regrade this part of our property manually. The below photo shows the progress after 1 or 2 loads as we started to build up the back corner: 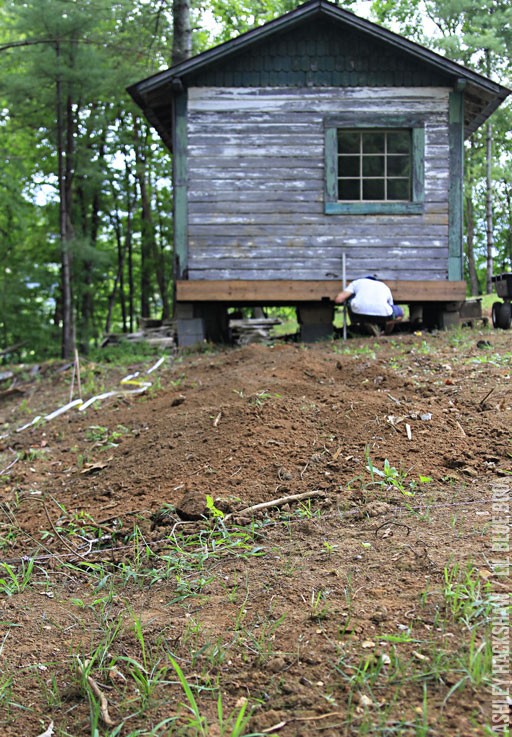 Once the area was flattened and leveled we did a quick rough estimate of where the fence was going to go it looked like this one side of the hill was going to end up too steep to have the front gate at: 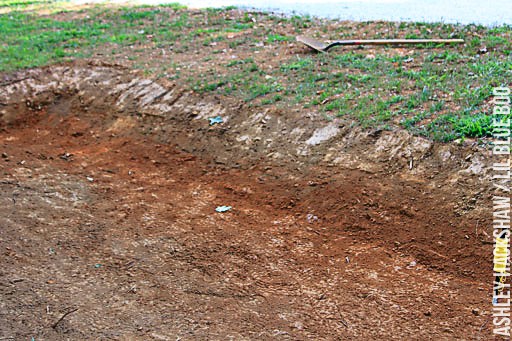 But…I really, really wanted the gate in front of the door of the depot so we decided to carve it out and add a few steps. Using the post hole bar it took about 45 minutes to completely carve out the hill: 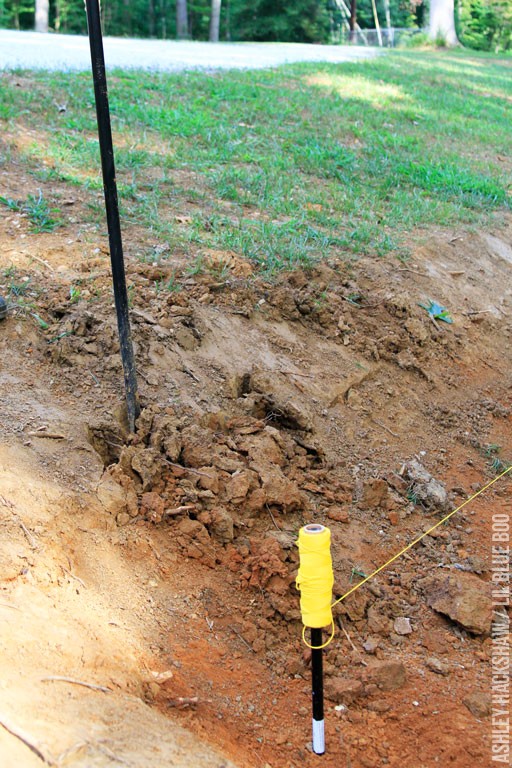 Flattening out the area for the first step: 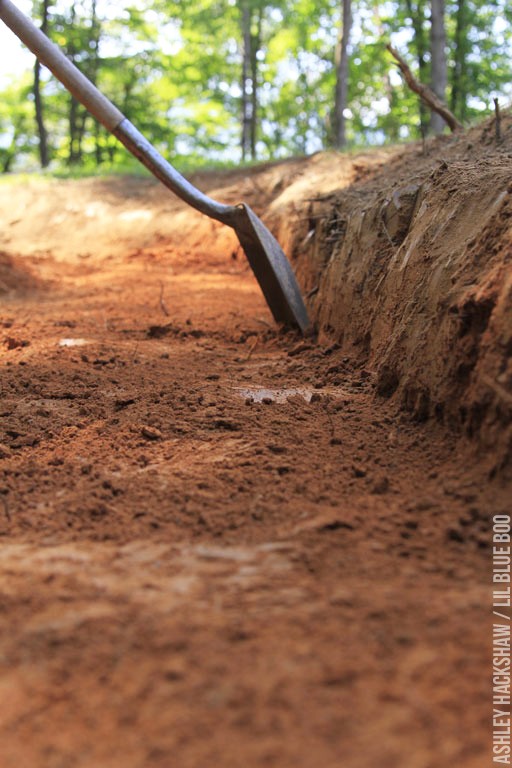 Placing the first wood step into place. This is an old railroad tie we had laying around. Railroad ties are typically treated with a chemicals which shouldn’t be used in a garden, but these are far enough and drain away from where the raised beds will be so I’m not worried about contamination if it does end up having some chemicals in it: 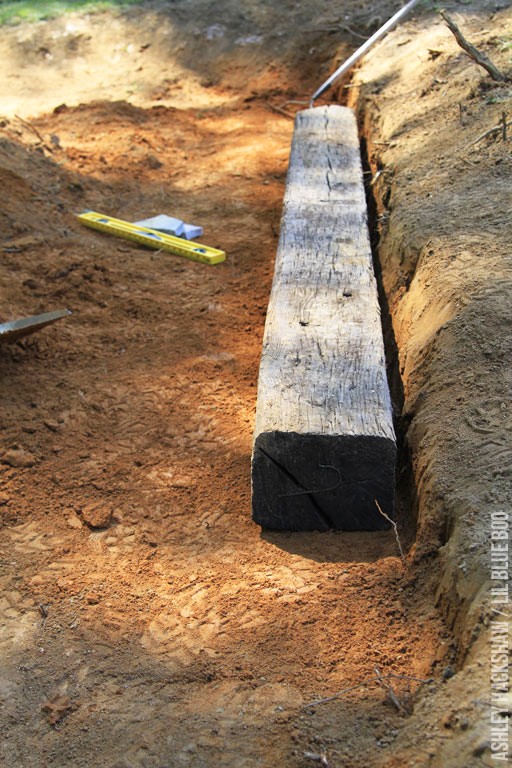 Carving out the second step: 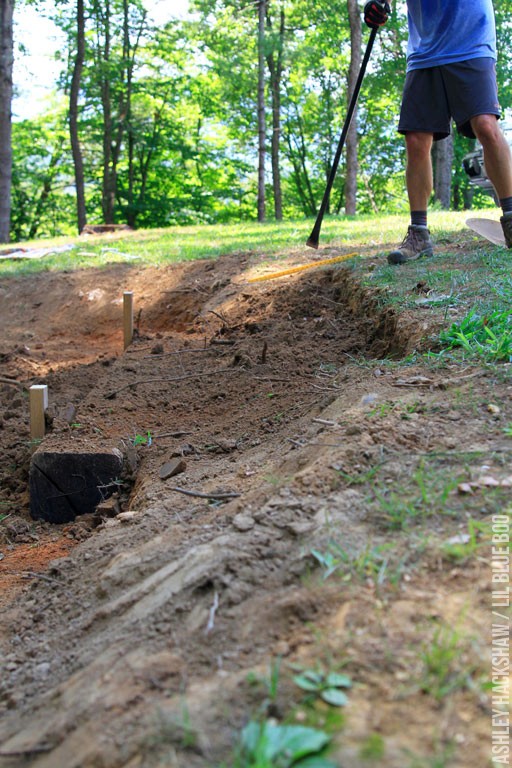 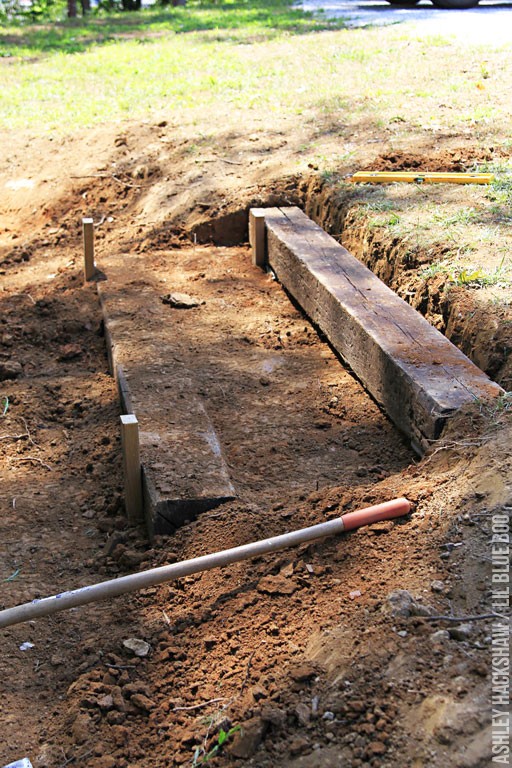 A few hours later we were ready to start measuring out for the fence: 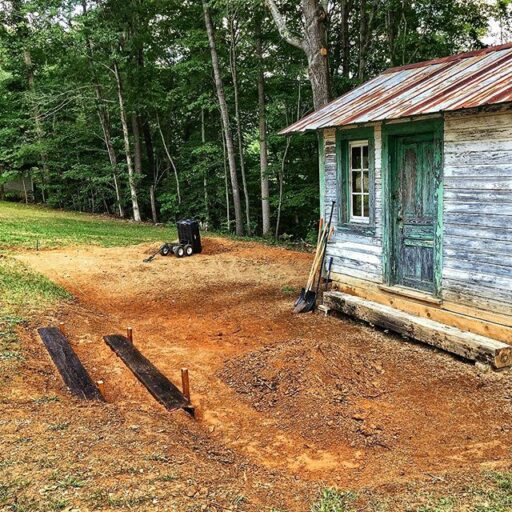 I know it looks like Brett is doing all the work but someone has to be the photographer. Stay tuned for the next post to see the progress.

The Old Depot Project is sponsored by Lowe’s Home Improvement.