Menu
You are here: Home / Uncategorized / One Must Wait Until the Evening

Boo: I think I want to be President one day.
Me: I think that’s great. Can I come live in the White House with you?
Boo: If you pay rent.

Last week we decided to make an impromptu trip to the Reagan Presidential Library.   She watched every video and listened to every audio. She stumped a few of the docents on trivia I didn’t know she had studied. She soaked up every inch of the place and treated it with more respect than I ever imagined.  I saw a different side of my child amid all of this history: 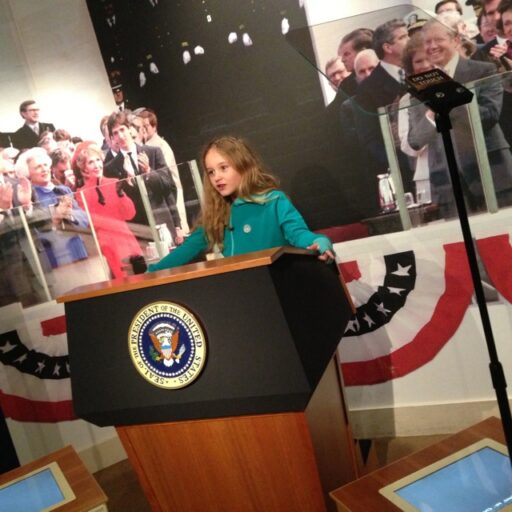 Boo: Did you know that one of the escape tunnels for the Berlin Wall was in a graveyard?

No, I did not know that.

She refused to look at any interior photos of Air Force One before stepping inside because she “didn’t want to ruin the surprise.” 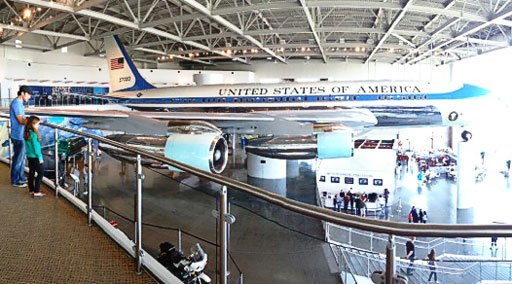 In the hall of heroes we were all in tears. She asked question after question about the Challenger explosion:

Boo: Do you think they knew they were going to die? 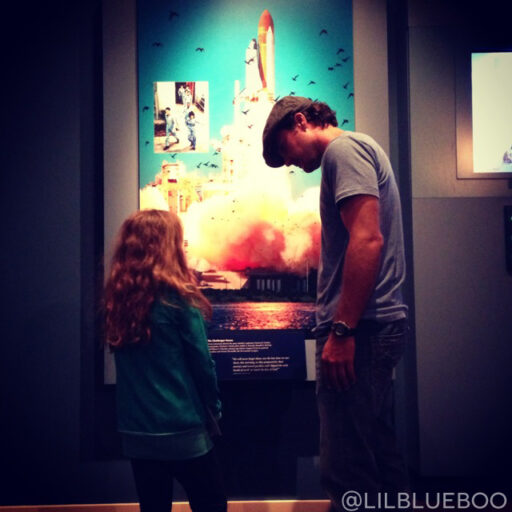 She listened to Reagan’s Alzheimer’s letter with tears streaming down her face.

…let me thank you, the American people, for giving me the great honor of allowing me to serve as your president. When the Lord calls me home, whenever that may be, I will leave the greatest love for this country of ours and eternal optimism for its future. I now begin the journey that will lead me into the sunset of my life. I know that for America there will always be a bright dawn ahead.

She stood transfixed at his funeral procession…and in return she had an entire audience transfixed on a 7-year-old girl soaking it all up with raw emotion – no political ties, just human. 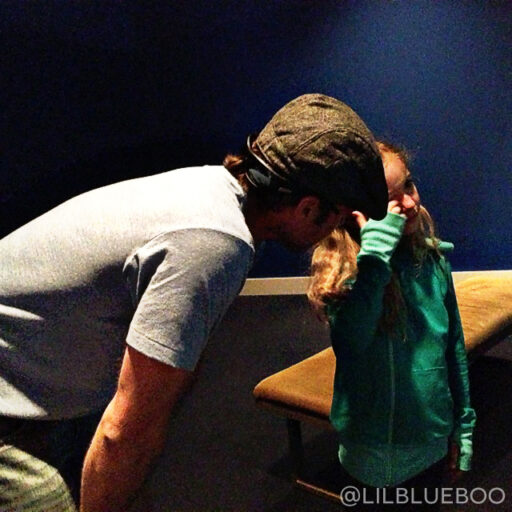 Boo: I would have gone to President Reagan’s funeral….if I’d been born yet. I couldn’t even know him. 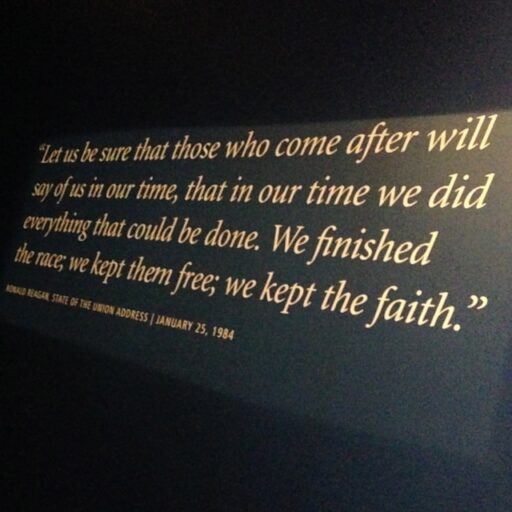 I completely related with Reagan’s diaries and quote obsession. He kept inspirational quotes on index cards, organized in photo albums. I like his organization….now if they would just publish his albums: 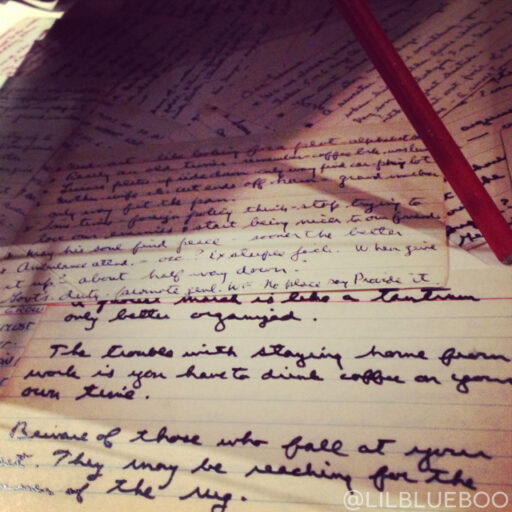 Just one word of advice…..don’t wear the same color green as the green screen at the Reagan Library….or you’ll be a floating head: 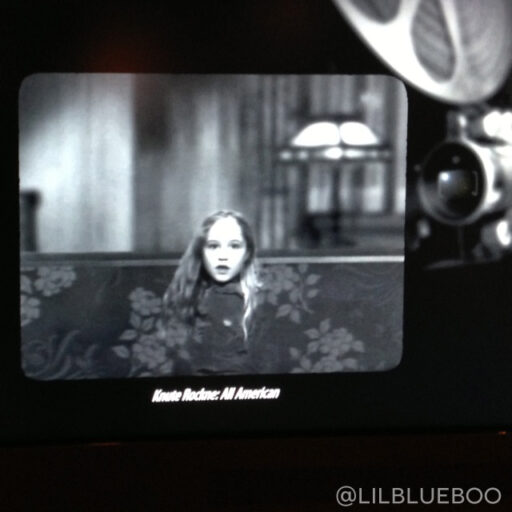 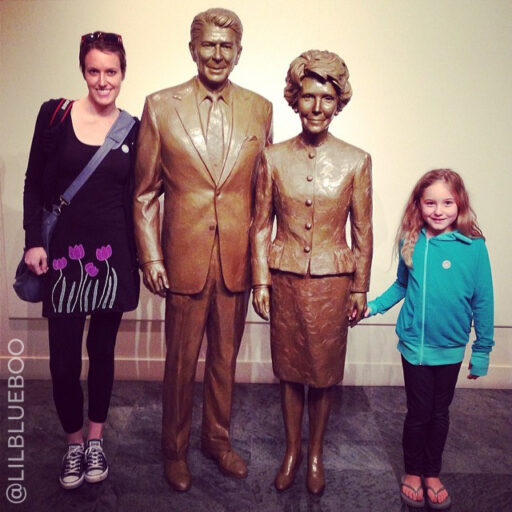 After we had finished seeing every last inch of the library we let Boo pick out something from the gift shop….she passed over all the toys, clothing, and tchotchkes…..and selected a small simple book: Quotations of Ronald Reagan.

And when we left Boo said it was her most favorite place she’d ever been …but she’d need to visit the other twelve libraries to be sure.

We drove down the PCH from Malibu to Newport….just because… 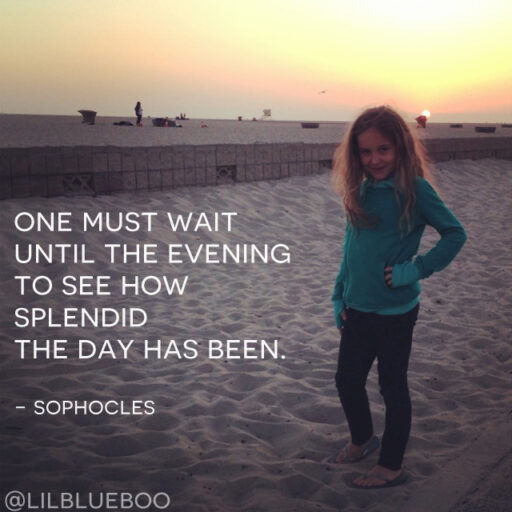 ….and we stopped at the USS Iowa even though it was closed for the night. 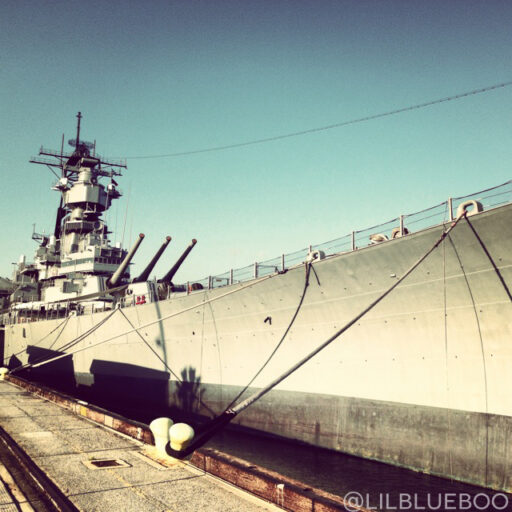 I stood in awe of this ship because all I could think of was my grandfather.  My grandfather served on the USS Grumium during the Battle of Okinawa.  The USS Iowa was also in that battle.  It connects dots for me.  A conversation I wrote down years ago, the words of my grandfather:

We had many kamikaze planes in the area where the Grumium was anchored. The kamakazes hit a sea plane tender and a combat hospital shope very close to our ship. They hit an amunitions shop that was loaded with bombs and shells of all kinds. The ship blew up instantly. The kamakazes also hit a tanker that was near the entrance to the harbor. It was burning from stern to stern with flames going up several hundred feet. Our planes had to bomb the ship so it would sink because the fire was illuminating our anchored ship locations to the enemy at night.

If that hull could talk……

The next day we went to the Natural History Museum. 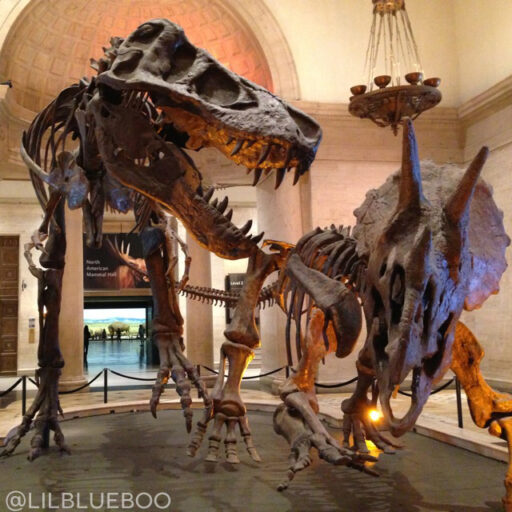 And the Space Shuttle.

But the entire time Boo was kind of distant.  She asked if we could just go back to the Reagan Library….or the USS Iowa.

Brett: What happened to our kid?
Me: I don’t know. It’s like a switch was flipped.
Brett: She grew up today.

We are lucky to have 2 Presidential Libraries in Southern California: Nixon and Reagan. I gave her a choice yesterday: pool or Nixon Library. She chose Nixon. So we hopped in the car and drove an hour and a half to Yorba Linda.

During the 28 minute introduction video Boo kept nudging me to write stuff down in my journal throughout Nixon’s farewell speech:

We think that when someone dear to us dies, we think that when we lose an election, we think that when we suffer a defeat that all is ended. We think, as T.R. said, that the light had left his life forever. Not true. It is only a beginning, always. The young must know it; the old must know it. It must always sustain us, because the greatness comes not when things go always good for you, but the greatness comes and you are really tested, when you take some knocks, some disappointments, when sadness comes, because only if you have been in the deepest valley can you ever know how magnificent it is to be on the highest mountain.

A friend, Paula, passed away a few days ago from a long time battle with cancer.  I couldn’t hold back tears watching the film. I looked over at Boo and she was crying. She said Nixon reminded her of Grandpa.

If you don’t know some sadness…you miss a great dimension in life.

Boo in the East Room: 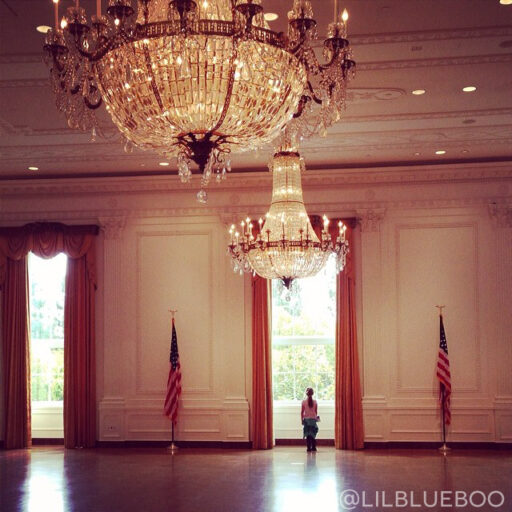 Boo: Wow, there are FOUR fireplaces. We don’t even have one fireplace.
Me: The White House is colder than our house.
Boo: Did you know that Dolley Madison saved a portrait of President Washington before they burned the White House down?

No, I did not know that.

We spent at least an hour in the Watergate section. I’ve never seen anyone so excited about Watergate.  I don’t think the library staff had either because they were a little taken aback when she ran into the room as if she’d been waiting for it her whole life.  (Watergate is her favorite scene in Forest Gump.)  Yes she’s actually telling me to be patient in that last photo below as she listens to interviews: 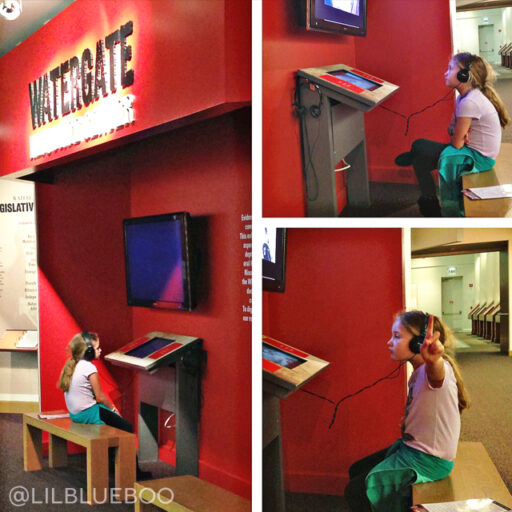 The Nixon Library is pretty incredible because the original Nixon home, where the President was born, is still standing and has much of the original furniture. As everyone exited I motioned for Boo to leave too but she whispered that she had a question for the docent.

Boo: You said they had an ice cream machine. Where is it?
Docent: It’s in the other room. (unhooks the green velvet rope and motions her to follow him) This will be our secret.

No fair. I didn’t get to see the ice cream maker.

Docent: There are 13 seats on this helicopter.
Boo: Um, I think there are 14?  I mean, if you count the one in the back. It’s the same as President Reagan’s.

I watched Boo very carefully through both Reagan’s and Nixon’s libraries.  I watched her as she saw Secret Service push President Reagan into a car during an assassination attempt, and then watched as her eyes widened when she realized she was looking at the actual suit that was cut from the President’s body that day.  I watched as she tried to understand the concept of the Berlin wall and why a government would want to keep people from leaving. I watched her as she learned for the first time about POWs and what they endured in prison.  I watched how she listened so deeply to a Russian prisoner describe how the code of smiling kept her fellow prisoners from losing hope.  I watched her try to wrap her mind around how a piece of steel from the WTC was snapped in half like  twig.  I think what struck me is how everything disappeared around her as she immersed herself in history, so much so….that Brett and I began to do exactly the same.  We imitated our child. Instead of just quickly passing over exhibits we sat down, picked up the audio receivers, watched the videos, read all the words….becoming increasingly unaware of the clock.

As we neared the end of the Reagan Library, we stood and watched President Reagan address an audience of D-Day veterans on the northern coast of France, Pointe du Hoc, where Allied soldiers had stormed ashore to liberate Europe from the Nazi’s:

Forty summers have passed since the battle that you fought here. You were young the day you took these cliffs; some of you were hardly more than boys, with the deepest joys of life before you. Yet, you risked everything here. Why? Why did you do it? What impelled you to put aside the instinct for self-preservation and risk your lives to take these cliffs? What inspired all the men of the armies that met here? We look at you, and somehow we know the answer. It was faith and belief; it was loyalty and love.

Listening to that I couldn’t hold back tears…and I looked over at Brett and he couldn’t either. An elderly gentleman diagonal from me, stared into the screen as if remembering something from long ago, his chest rising and falling unable to contain his deep emotion.   And then….at that moment a boy ran through the exhibit cackling….and that boy took off his hat and swooshed it in front of that man’s face to block the TV as if to taunt him.    But the man didn’t flinch, because….he never saw the boy or the hat.  He was on that cliff….with the veterans at Pointe du Hoc.  Then I looked at Boo and realized that she, too….was on that cliff.

I know I’m the parent but sometimes I feel like I’m being led by a 7-year-old.

P.S. All of this started when I bought a bunch of the DK Eyewitness books. Boo’s favorites in order:

Presidents (this link is updated through current President) 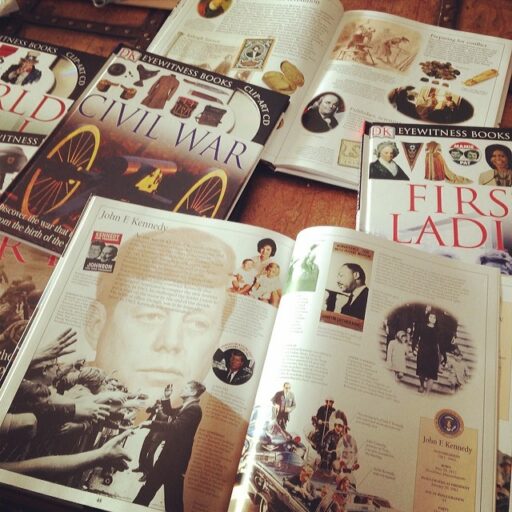 Each book sparks more and more interest in her…

Boo: Why would Hitler kill himself?
Me: Probably because he didn’t want to be caught.
Boo: Do you think he went to heaven?
Me: I don’t think so. He did so many awful things, killed so many people.
Boo: He killed them, and THEN EVEN STOLE THEIR STUFF! (I read her an article from Vanity Fair on the $1billion art stash recently found.)
Boo: Do you think he would have killed Jesus, if they lived at the same time?
Me: Yes.

I feel like I have a lot of catching up and refreshing to do on my history.

(only 11 more Presidential Libraries to go….)