Menu
You are here: Home / Travel / They Were People

On our trip last week we visited the Holocaust Memorial Museum.  It was at the top of Boo’s list. Brett and I debated on whether or not she was too young for the main exhibit, but we felt it was something she needed to see. She’s always been very inquisitive about the Holocaust and Hitler, just like she is with Pompeii and September 11. She becomes fixated on events that are complex and tragic and hard to comprehend.  Last year we read Anne Frank together and after a few chapters she stopped me and asked: do they find her? When I told her yes, they find her, she didn’t want to read anymore. We haven’t finished the book yet.  Back then she asked me if I thought Hitler was in heaven or hell.  I asked her what she thought and she answered: he’s in hell.

The most powerful moment was when we walked into the permanent exhibit entrance and encountered a large picture of the Ohrdruf camp liberation:

Boo: What are they looking at? What is that on the train tracks?
Me: Those are human remains.
Boo: What do you mean?
Me: People. They were people.

She turned her back to the picture for a few moments, for the first time realizing the magnitude of the evil, for the first time realizing what humans are capable of.  I saw her lose her innocence right before my eyes. I knelt down and whispered to her: we are here to be witnesses.  She nodded…and then I saw her fill up with strength and walk to the next image in the exhibit. 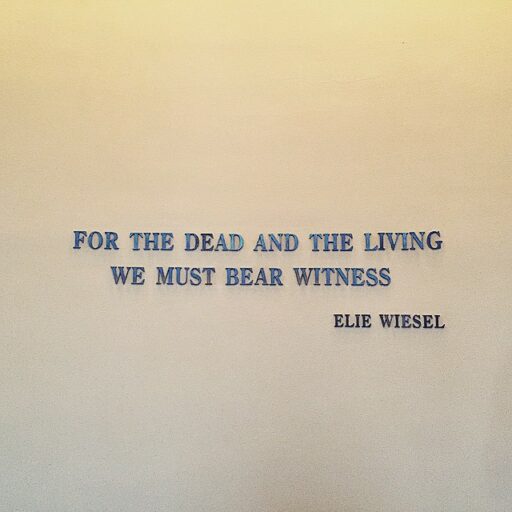 She walked thoughtfully through the museum, reading every notation.  I was so proud of her.  Her interest, compassion and empathy floor me sometimes. She whispered and tiptoed and showed the exhibits more respect than some of the adults did. When we came to a pile of books representing the books burned by the Nazi’s she knew exactly what they were because we had watched The Book Thief this last summer. When I pointed out a book by Helen Keller in the pile she lit up with recognition because we had also just recently watch the Miracle Worker (1962). And she said: I’m glad Helen Keller made more copies of her books.

We left the Memorial to eat lunch and afterwards Boo wanted to go back, so we went through the children’s exhibit a second time. It follows a boy named Daniel. She wept in the room where she learned his sister and mother didn’t survive. So did I.  But she wept….standing in the center of the room with tears streaming down her face, captured by the story on the screen, as other visitors walked around her noticing her emotion. After a while she continued on to the next exhibit. She walked through the room that transforms Daniel’s old life into his life in the ghetto and exclaimed: hey, that’s my bed.  (it really was…she has a bed exactly like the one in the museum that we got from the old depot).  And then I think it really hit her: Daniel was a kid just like me. 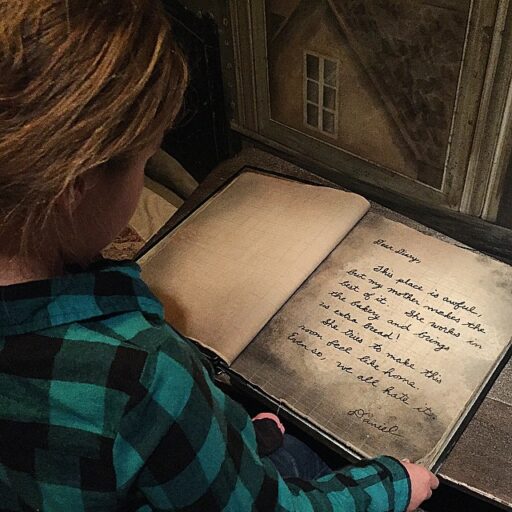 A few questions from her perspective:

On the gas chambers: Why would they go into those showers at the camp?  Why would people think it was normal to shower with other people? That would have told me that something bad was going to happen.

On the murder of the disabled: Why would they kill people just because they were different? What if Hitler lost a leg? Would he have had to kill himself? Like when they tried to kill him at a meeting, he could have lost a leg. (she told me the story of the attempted assignation of Hitler at Wolf’s Lair, I don’t know where she learned this, maybe school?)

I asked her today what she remembers the most and this is what she said:

The gas chambers. That they locked people in rooms and pretended they were going to take a shower.

The shoes. So many of them. And some of the shoes were so nice, it was like the people didn’t even know where they were going! They were all dressed up.

That they tried to burn the bodies, to hide what they had done. They knew they were wrong.

They knew they were wrong. Yes. And still the Holocaust happened. That’s the hardest part to explain to her.  And persecution still happens all over the world today.

I wanted Boo to be a witness. That’s why we went. To know what our responsibility is when we see injustice and hatred. To know when to stand up and say:

THIS IS NOT RIGHT.

This is why we have sought out a new path in life, this is why we continue to simplify and seek ways to be more generous and compassionate:

to create space for the things that matter.

This is why our kitchen chalkboard always reads: let your faith be bigger than your fear.

Memory is what shapes us. Memory is what teaches us. We must understand that’s where our redemption is.
-Estelle Laughlin, Holocaust Survivor

If you haven’t yet been to the Holocaust Memorial Museum, please go. You can start here.