Menu
You are here: Home / My Picks / Miniature Jigsaw Puzzles made from Postage Stamps

Miniature jigsaw puzzles made from postage stamps … that sounds like something I would like, right? This stamp is so small I almost had to use tweezers to put this back together: 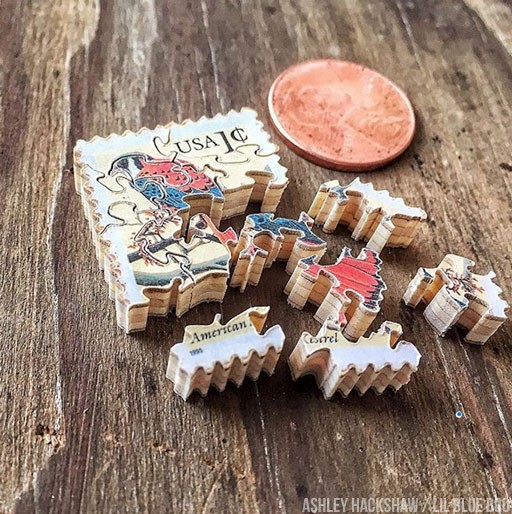 These amazingly tiny wood jigsaw puzzles are made by my friends father, Lynn Warner. Here he is at the Indiana State Fair demonstrating his woodwork (on a foot powered saw that he built): 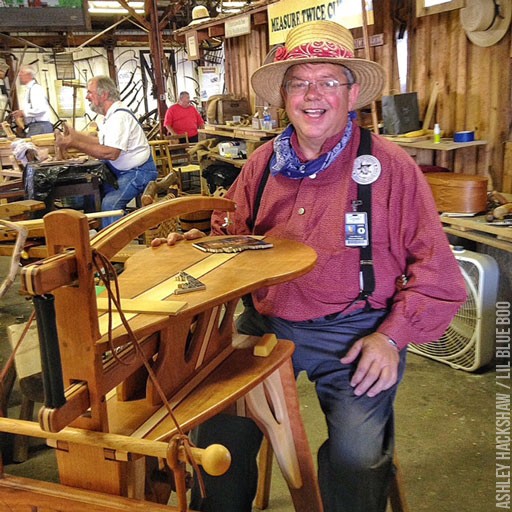 A stamp commemorating the 100th anniversary of mail order: 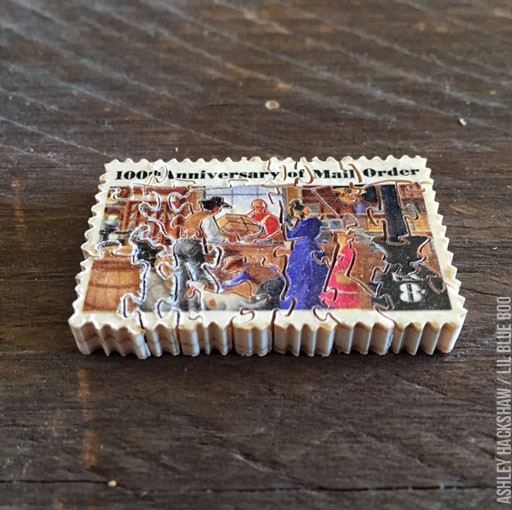 The intricate cuts on the back: 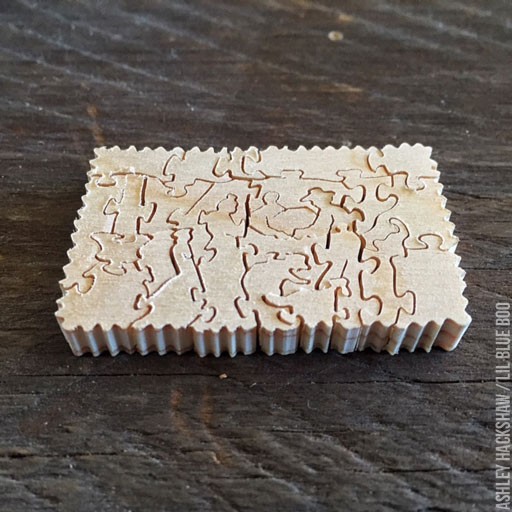 This puzzle is so small: 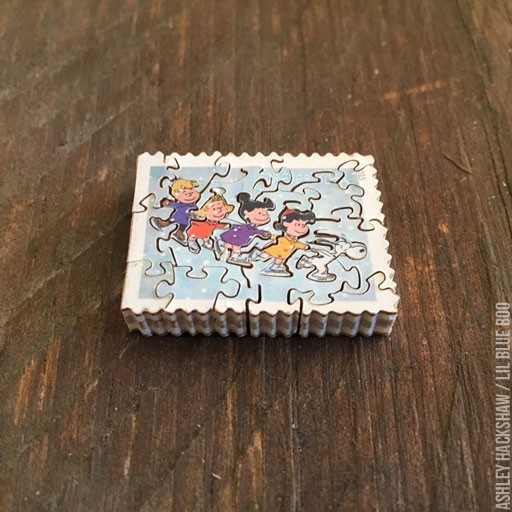 The pieces of the puzzle are smaller than a pea…so you can imagine how small the intricate cuts have to be! 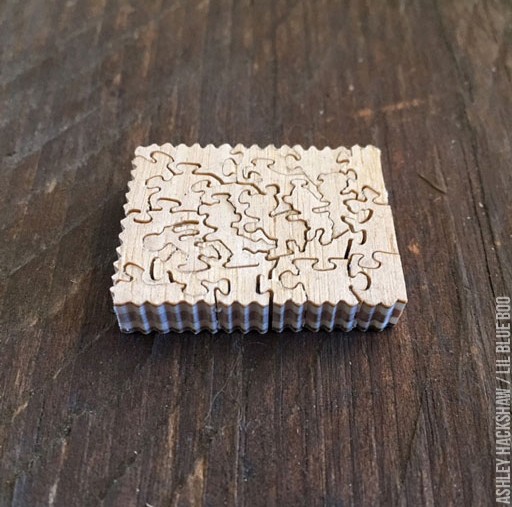 These are so unique because Lynn uses a technique which allows the main image from the front of the puzzle to be seen as cut-out shapes on the backside too: 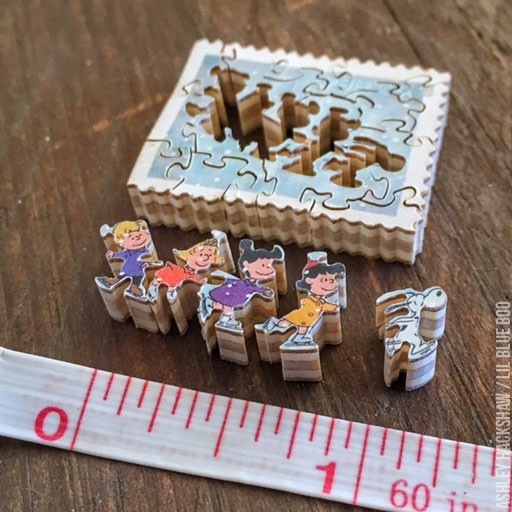 A little on the process from Lynn:

“A commemorative postage stamp is affixed to a 3/16″ plywood, then given 2 coats of clear acrylic finish. Using a very small (8/0) jeweler’s coping saw blade installed in a standard scroll saw  the puzzle is cut. Yes, a magnifying glass equipped with a light is used during cutting. After cutting is complete, the puzzle’s backside is sanded and the sawdust is blown away. The process takes an average of an hour. The time varies with the particular stamp being cut and the number of times the cutter has cut the chosen stamp.” 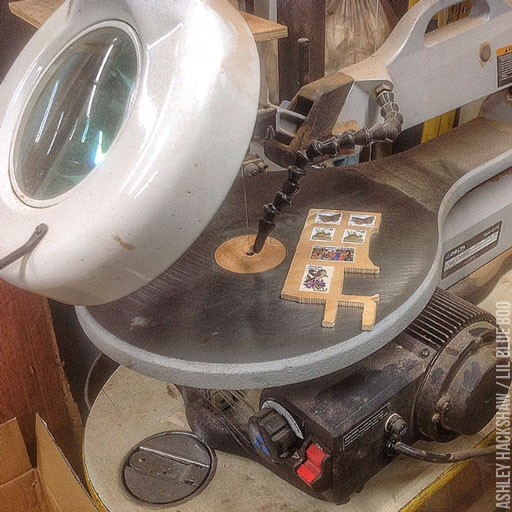 Lynn includes a history of jigsaw puzzles in the packaging with each of his puzzles. A few excerpts:

I wonder how many pieces were lost during rentals? And did they count the puzzle pieces when they came back just to make sure they were all returned?

I had to posed the little tiny puzzles with a few of my little tiny railroad miniatures. I think this looks like Sir Richard Branson: 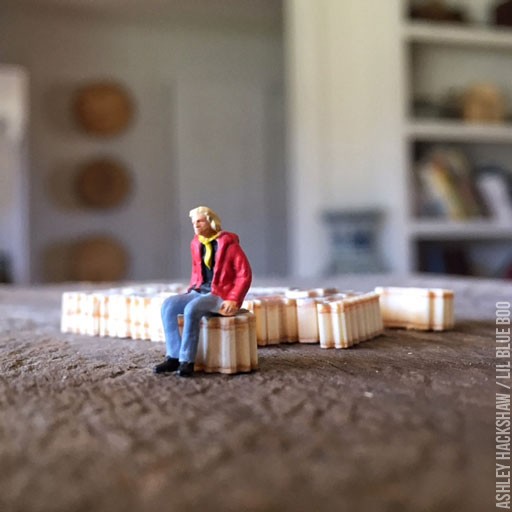 A family of deer: 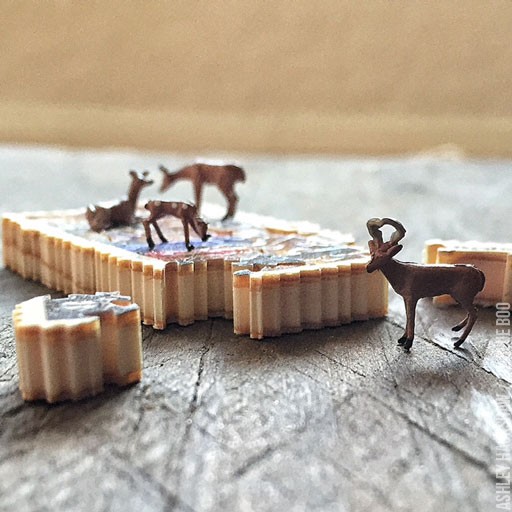 It’s funny, I remember doing puzzles when I was younger. My grandparents always had a puzzle out to work on. I think we did a few puzzles while we were at the Hemlock Inn a year ago. Since they were community puzzles they were alway inevitably missing a piece or two. I remember Harper the Intern trying to match puzzle pieces back to the original box in her spare time! I think I might start looking for some good puzzles to have around the house for snow days. Jigsaw puzzles are good for the brain!

A few other things to check out:

A 32,000 piece puzzle. The box weighs 42 pounds and the finished puzzle dimensions are 17′ x 6′. I think this is my new answer to the question: what would you take with you to a deserted island?

This 15-year-old is the fastest puzzler on the planet. She can assemble about 18 pieces per minute. I think my eyes would fall out.

Thank you Lynn for sharing your awesome work with us!