Menu
You are here: Home / Sixty One Park / Building a New Farmhouse Foundation

The Sixty-One Park farmhouse project has gotten a lot bigger since we started…but in a good way. We’ve had a lot more prep work to do because of the age of the house but that’s opened up opportunities to improve the property. The main thing that the guys have been working on the past month is the foundation: 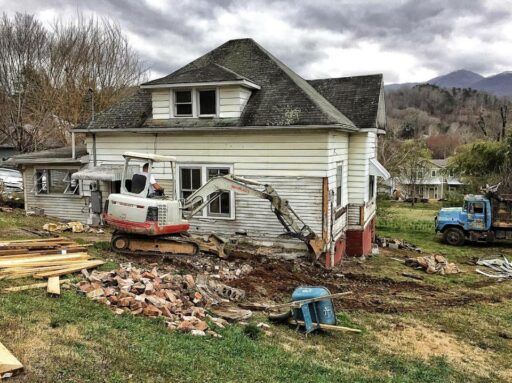 There’s an embankment on one side of the house that has caused all kinds of water damage over the years. In order to expose the current foundation we had to remove the concrete sidewalk and concrete wall: 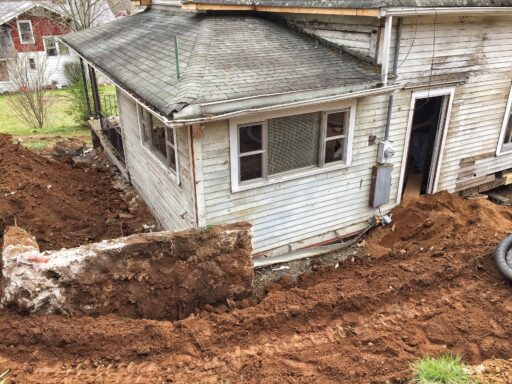 Jaime and Brett started on the Northwest side of the house where the sidewalk was right up against the beam supporting that side of the house. This beam was actually still in pretty good shape, but had rolled over due to some rot, so the guys decided it needed to come out.  They built temporary walls and tied the 1st floor to the second floor so that they could lift the house from the inside to take the weight off the beam that needed to be removed: 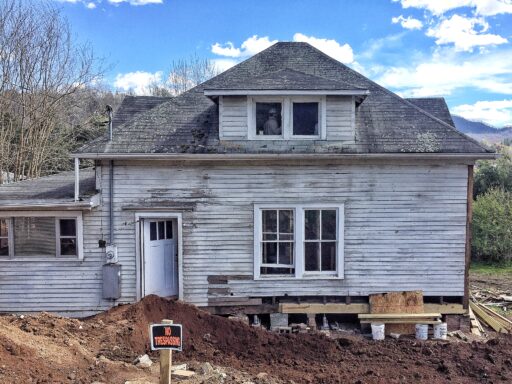 Here is Jaime rebuilding one of the piers that serve as the foundation for the house.  This was the first section of the new beam to be replaced, which at that moment was probably the straightest thing in the whole house.  They try to work on the house every morning before work, rain or shine.  It was raining on this day, but they worked through it: 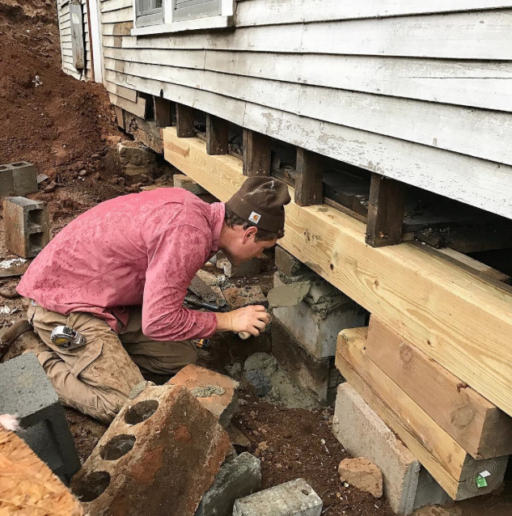 Working their way down the wall, one section at a time.  A side note, that as soon as they finished with this side of the house the old door closed perfectly…amazing! 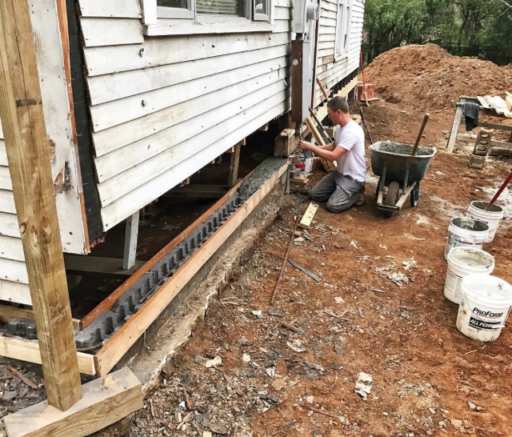 After the beam was removed and replaced they worked around the house leveling as they went.  Some sections, like the one below, created other problems like: Where do we put the hydraulic jack?!  Problem solved, they just “sistered” a board onto the beam and cantilevered it out past the foundation so a jack could go under it.  Then they jacked up the entire house to straighten it: 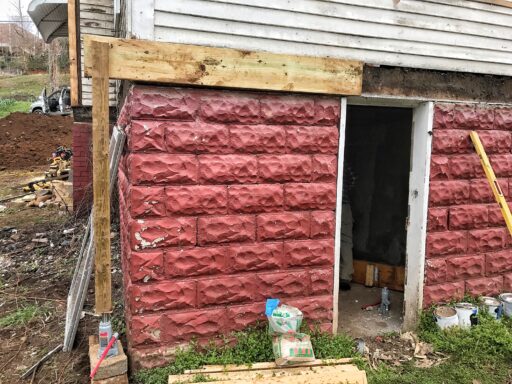 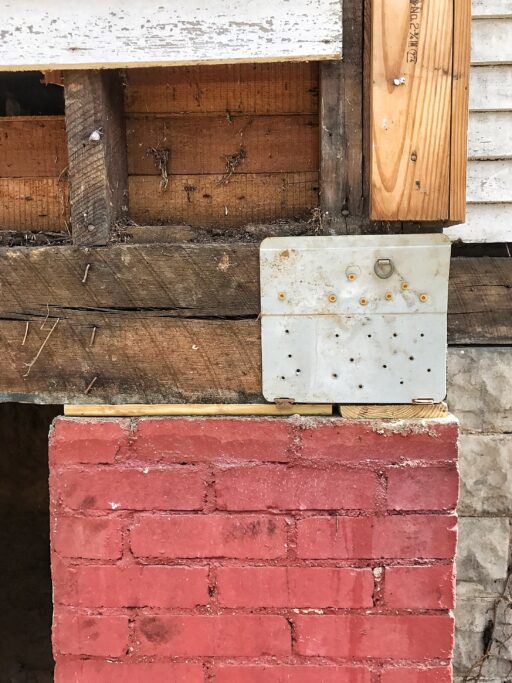 The last thing to be fixed was the foundation under the old kitchen walls. These walls had sagged the most over time. First, they jacked up the house. Then they put scaffolding under the kitchen ceiling so the walls would hang from the roof temporally.  Here’s what I’ve learned from the guys: Use what you have, make it safe, get the work done quickly and then set everything back down. They are so funny to watch…some of the solutions they come up with are hilarious, a little MacGyver never hurt: 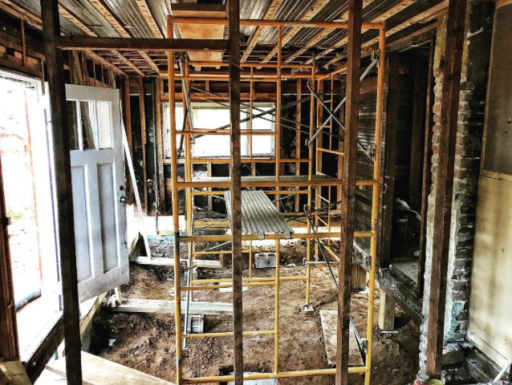 On another Saturday, a brick skirt was started…but there is still a ton more to go.  Jaime was able to get some old reclaimed brick to match the old style as close as possible.  I like how they took the extra time to joint the beams together just like it would have been done 100 years ago: 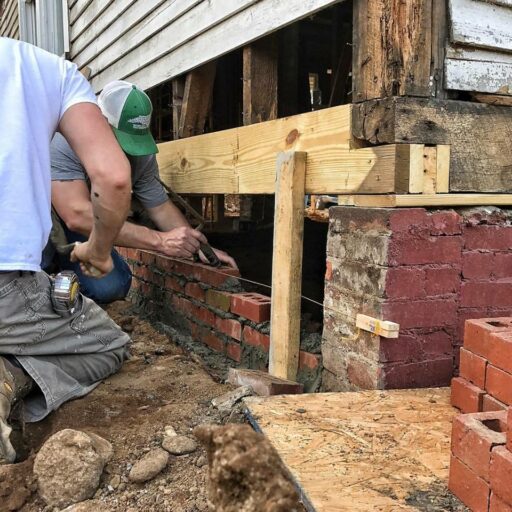 The old deck was by far the worst floor in the house…I was really worried someone might fall through it and was relieved when it was finally completely removed. It’s interesting to note that whoever built the house (I think the Everett family) built the deck with tongue and groove flooring that matched the inside of the house. The crawlspace actually extends under the deck! We’ll have to make sure we thoroughly insulate the crawlspace so none of the pipes freeze in winter. Also, the tongue and groove flooring that we put back will be pressure treated so it holds up better.  I can’t wait to swing on the swing on the porch when it is done: 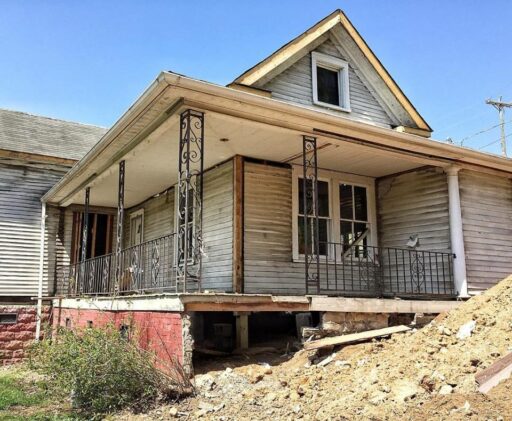 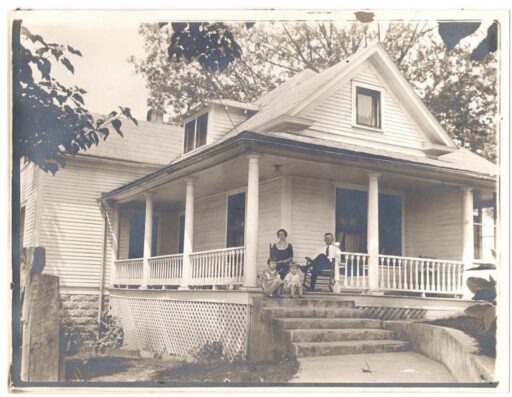 In this photo the old kitchen was just floating as Brett poured new footers for the foundation walls:

The new kitchen foundation wall on the right and the deck completely removed on the left.  The guys still have to rebuild the brick foundation under the deck before they rebuild it, but that is for another day. 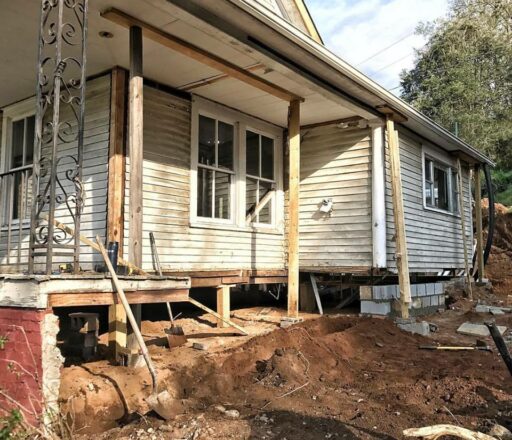 The footers for the brick foundation under the deck. 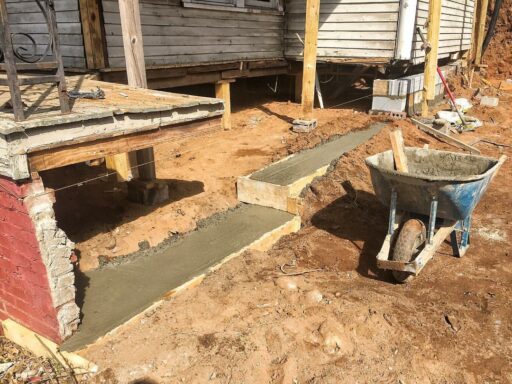 Right now everyone is so busy that the guys are just working at the crack of dawn….sometimes for only an hour at a time before going off to their real jobs.  They call themselves “One Hour Construction Company” which I think works perfectly. Last night we all got together to go over the final downstairs floor plan that Jaime drew up. I’ll share that soon. I think it works really well for a multi-family rental! In the meantime I’m still dreaming up decor for the inside. We’ve found some old metal beds and other furniture to restore. I’m still looking for an old telegraph machine that will go along with the history of the old house!

To read more about the Sixty-One Park Farmhouse click here.

You can follow Sixty-One Park on Instagram where I post more recent updates as we go along. We are still aiming for early 2018 for our first reservation openings! It’s right smack in the middle of downtown Bryson City where it’s just a 5 minute walk to the train, the river park, our store Bryson City Outdoors and all my favorite shops and restaurants. I hope to maybe hold some small retreats there too. It’s exciting to undertake a project that honors the railroad history and will bring new visitors to our cute little mountain town: 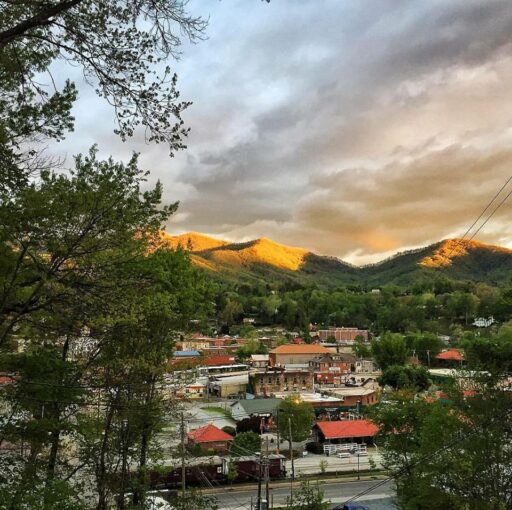