I tend to get really comfortable in my little place in the mountains but its always good to get out and see new things. My friend Sarah invited me to stay with her last week in Gloucester. She had rented a place right in the heart of the Rocky Neck Art Colony and knew that I would be inspired by all there was to see. I was….so much so that I wish I could just live there for a few months and paint all the things! 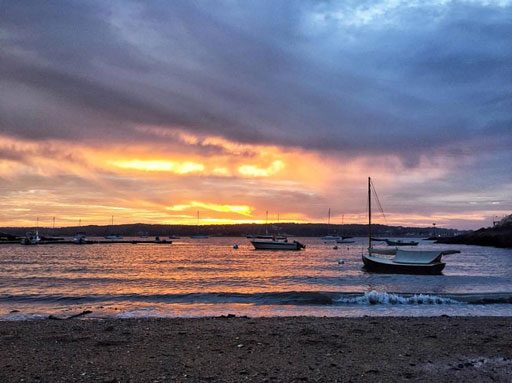 Below is the view from Hammond Castle. I love the Turner-like overcast skies. 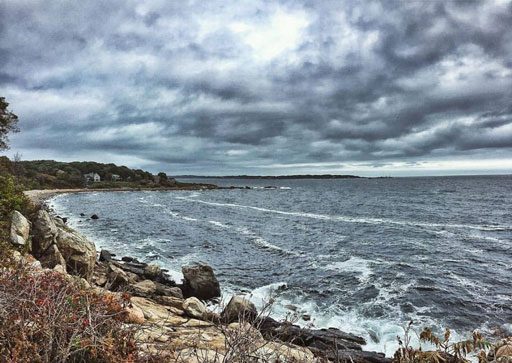 Walking to the old Tarr and Wonson Paint Factory in Gloucester we passed some plein air painters who had driven all the way from Colorado. The interesting thing about plein air is that since it takes oil paint almost a week to dry they have special cases that hold two paintings almost an inch apart from each other. You carry them wet for a while! 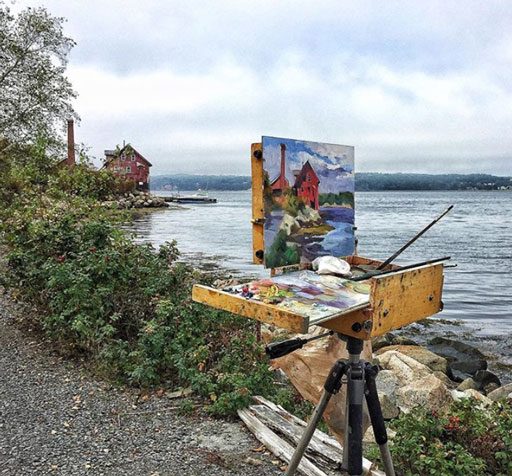 This sculpture was at the old paint factory. The extinct great awk. We were really lucky to happen upon the artist Nathan Thomas Wilson as he was starting to disassemble it. It was made from trash found floating in the ocean. 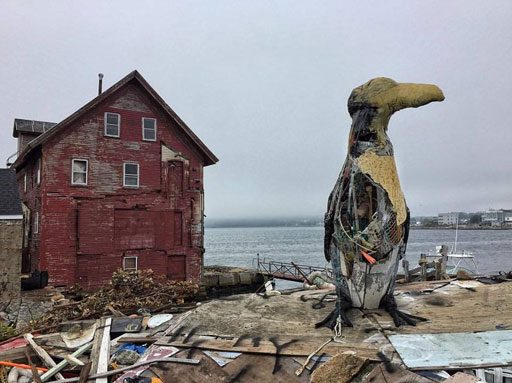 A little history about the factory from the Ocean Alliance which houses its headquarters in the buildings:

“Founded in 1623, Gloucester is America’s oldest seaport and the birthplace of her first major industry. Though built on fishing, Gloucester has also attracted painters, sculptors, poets, adventurers and remarkable inventors. One of the greatest inventions to come out of Gloucester solved a problem that had plagued ships for centuries: barnacles, worms and weeds that grew on the hulls and slowed their progress. Tarr and Wonson experimented for years, painting chemical concoctions onto house shingles, then immersing them in Gloucester Harbor, until finally one of their concoctions showed antifouling properties. It was based on copper oxide in tarr with napthalm.

In 1863, Tarr and Wonson received a patent for their revolutionary bottom paint. By 1870 the first buildings of Tarr and Wonson’s paint manufactory appeared at the end of Rocky Neck. One cannot overestimate the effect of the new antifouling paint. It transformed not just the North Atlantic fishery but trade, commerce and even warfare. For many years, Tarr and Wonson made the only bottom paint in America, but it coated the hulls of ships that sailed the world, and is still made today.

When these two men built the paint manufactory at the end of Rocky Neck they did not know that both their paint and their buildings would become such an important part of New England’s history. Painters from around the world, such as Edward Hopper and John Sloane, came to capture these buildings on canvas, a trend that continues today, making the paint factory one of the most familiar images in New England art. It connects the thousands of fishermen who have sailed by on their way to the Banks, some never to return, with the men who continue to fish out of Gloucester today.” –Ocean Alliance website

As I wandered around Gloucester I picked up various things and used them for my painting of the day. I didn’t keep the shell because it had a hermit crab in it…cute little guy. 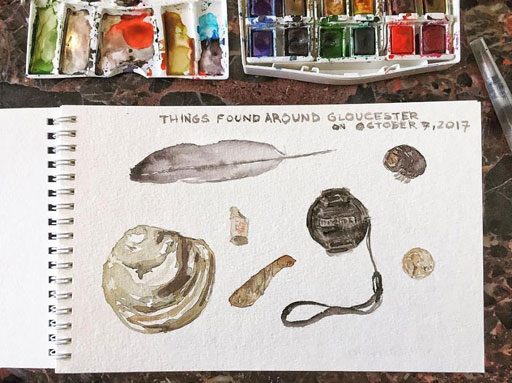 Right nearby where we stayed (Rocky Neck Accommodations) there was a small beach that’s known for sea glass. It was pitch black on the beach once the sun went down and it was just me and another couple. “Are you looking for sea glass,” they asked. “No, for sea pottery,” I replied. They hadn’t noticed any of the tumbled white pieces on the beach until I pointed them out. They were so excited as they started to find them too. I found old buttons and other things. Here are a few treasures I found on the beach in Gloucester. Maybe one is from an old shipwreck: 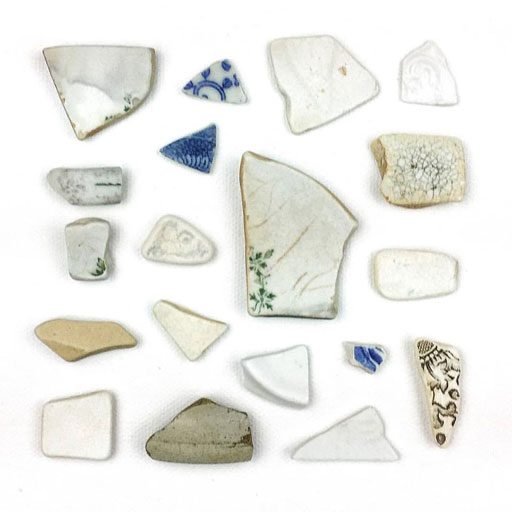 With my obsessive love of lost things, broken things and written things these installations at the Cape Ann Art Museum are right up my alley. Ceramic artist Diane KW imprinted shards of pottery from shipwrecks (1620-1840) with digital images of documents from the museum’s archives. The writing is from Capt. Edward Babson log and the diary of his wife, Amanda Babson, written in Gloucester around 1838. 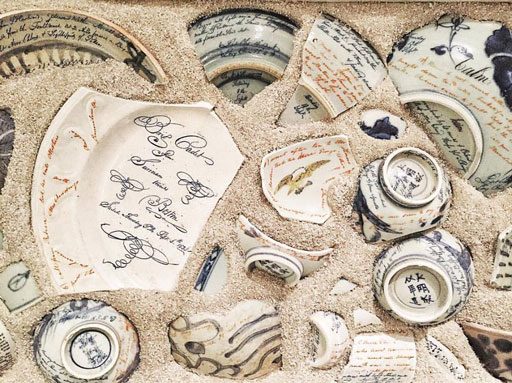 I visited artist Jon Sarkin’s studio last week in downtown Gloucester. He was listening to Heart of Darkness by Joseph Conrad and told me to pull up a chair…so I did. Here’s a view of his studio. I would have loved to photograph every square inch. 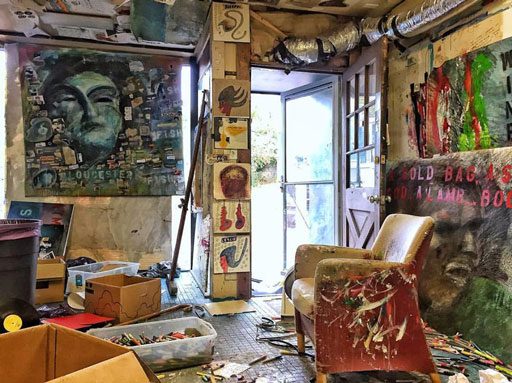 This is probably the most intriguing houses I’ve ever toured: Beauport, the Sleeper-McCann house. I don’t even know how to describe it except that it’s an eclectic-hobbity-mystical-labyrinth-theatre-cottage-castle. Henry Davis Sleeper, an interior designer, started building it in 1907 and spent 27 years adding onto it. He used reclaimed paneling/timbers from demolished houses, covered the walls with fine and rare wallpapers and also crammed it to the brim with amazing collections. When Sleeper died of leukemia in 1934, the McCann family saved it and eventually bequeathed it to the Society for the Preservation of New England Antiquities. I have so many great pics of this house I’ll have to do an entire blog post on it. 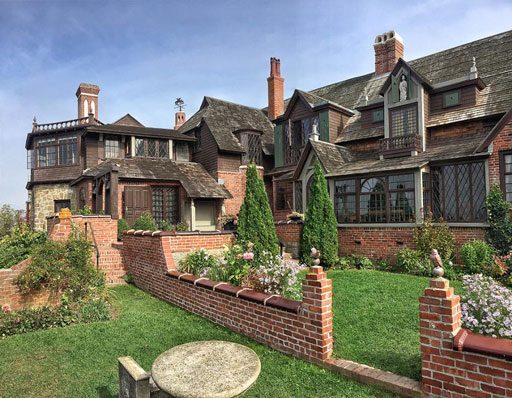 We spent a lot of time in nearby Rockport too. The light was always breathtaking…I was in awe. At sunset one day: 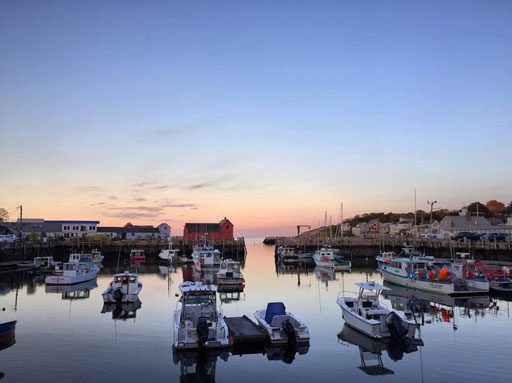 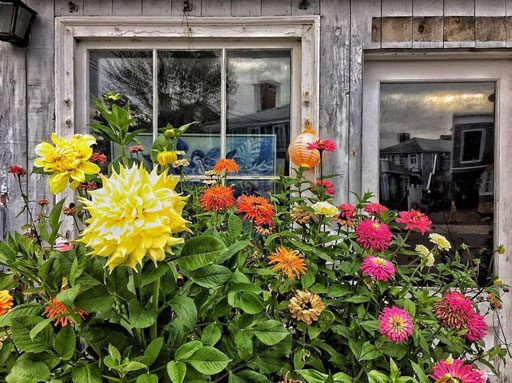 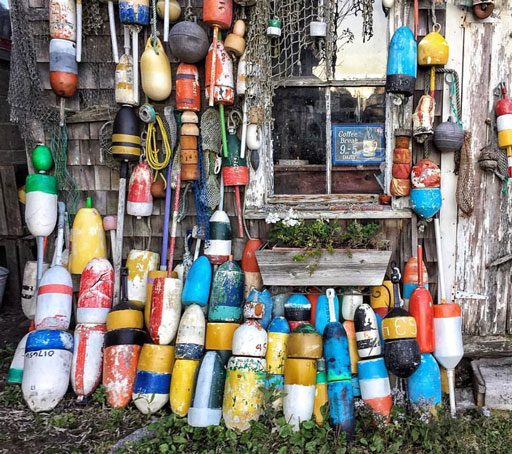 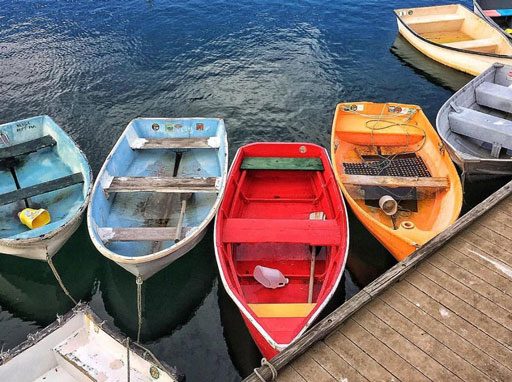 The iconic Motif Number 1, called that because it’s one of the most painted buildings in the United States. The original structure was destroyed by a blizzard in 1978 but an exact replica was built in its place. 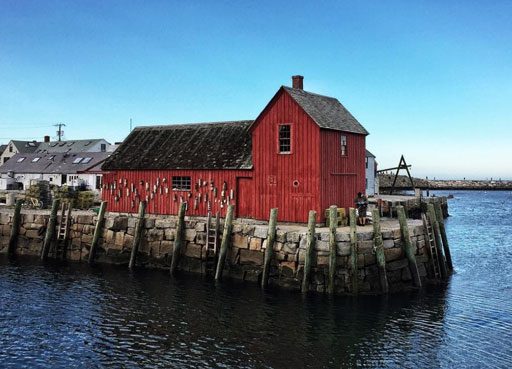 I spent some time painting in Rockport. 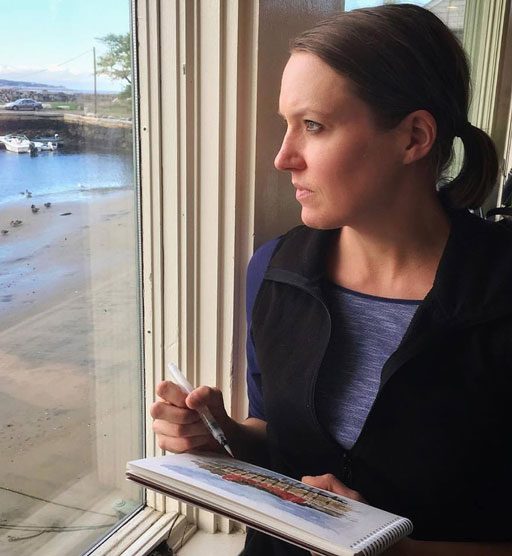 I painted the Motif using watercolor and Gave it to my friend Sarah for arranging such a wonderful trip. 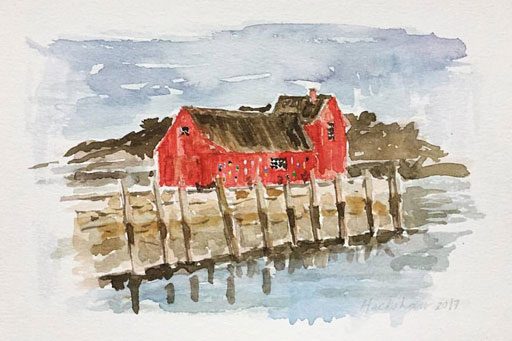 Concord, Massachusetts is about 45 minutes away from Gloucester so we took a day trip there. So much incredible history in such a small town. This is Louisa May Alcott’s Orchard House where she wrote Little Women: 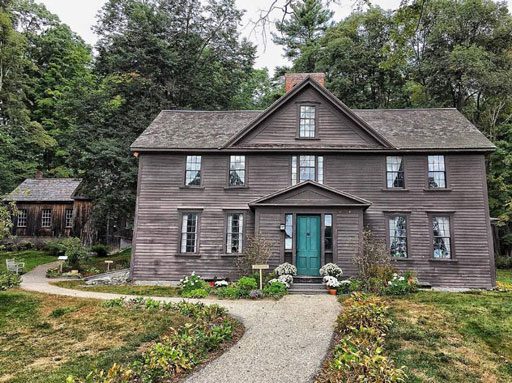 And almost right across the street from the Alcott house is Ralph Waldo Emerson’s house where he lived from 1835-1882. So many things learned that make me appreciate this man even more. Like how he was so supportive of the neighboring young Alcott girls, letting them borrow books and paintings to copy and practice. Emerson’s paintings were reproduced all over May Alcott’s bedroom walls. The Emersons had their children and servants eat with them at the dinner table which was rare at the time. They were very strong abolitionists and would have never had any indentured servants or slaves. Another interesting thing I learned was that a young John Muir volunteered to be Emerson’s guide in the west when the transcontinental railroad was first completed. Later Muir said about his hero:

“Emerson was the most serene, majestic, sequoia-like soul I ever met. His smile was as sweet and calm as morning light on mountains. There was a wonderful charm in his presence; his smile, serene eye, his voice, his manner, were all sensed at once by everybody. I felt here was a man I had been seeking. The Sierra, I was sure, wanted to see him, and he must not go before gathering them an interview! A tremendous sincerity was his. He was as sincere as the trees, his eye sincere as the sun.” 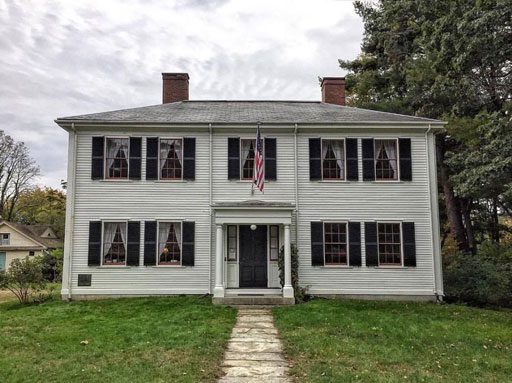 And right there as well is the Concord Museum which has Thoreau’s journals on display: 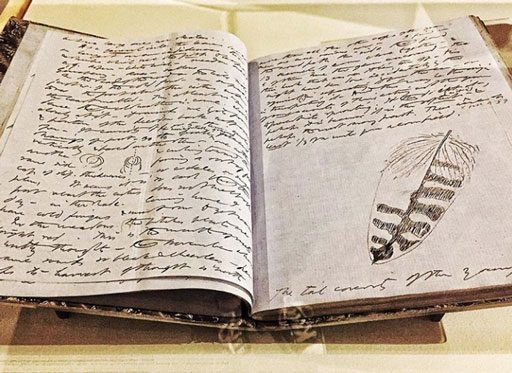 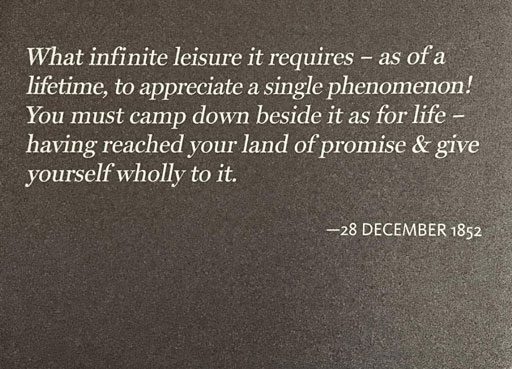 I bought this book at the museum for Sienna but also for me. I love the unique journaling ideas it holds:

Henry David Thoreau for Kids: His Life and Ideas, with 21 Activities by Corinne Hosfeld Smith 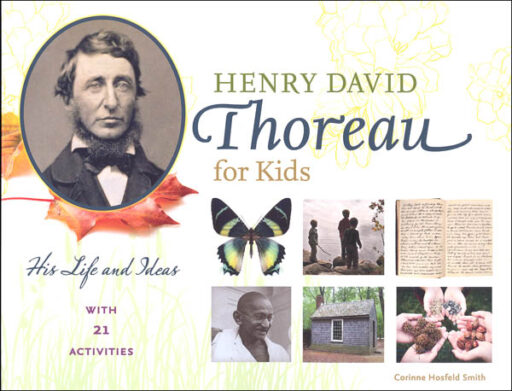