Menu
You are here: Home / Books on the Smoky Mountains 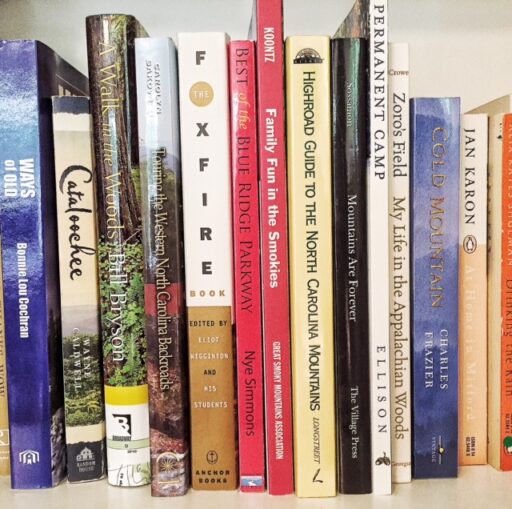 A list of regional books I’ve read that I recommend. Suggestions and recommendations also welcomed!

Based on the federal government’s relocation of rural mountain folk to make room for the Great Smoky Mountains National Park. A story set against the backdrop of the Civil War, following three generations of families. Note: you can even go and visit the real Cataloochee where it’s been preserved by the park: two churches, a school, and several homes and other historic buildings. It’s like a place frozen in time. But read the book first!

Serena: A Novel
by Ron Rash

Now a major motion picture, this book tells the story of George Pemberton and his new bride, Serena, and their booming logging operation. What I loved about it was the backdrop against the 1930’s wilderness, the push for the formation of the Great Smoky Mountains National Park and the inclusion of real life characters such as the Vanderbilts and Horace Kephart.

Also a major motion picture that hopefully you’ve seen. A beautiful story about a lone wounded soldier trying to return home from war to the woman he loves.  My favorite parts are the beautiful writing about Ada and the rough-around-the-edges Ruby trying to survive. And the beautiful passages about grief: “…for you can grieve your heart out and in the end you are still where you were. All your grief hasn’t changed a thing. What you have lost will not be returned to you. It will always be lost. You’re only left with your scars to mark the void. All you can choose to do is go on or not.”

The story: Nineteen-year-old Christy Huddleston leaves a life of privilege to teach at a remote school in the rural Smoky Mountains. Cutter Gap, the community she has made the trek to, is an entirely foreign world where she learns about the pride, poverty, religion and superstitions of the people that live there.  First published in 1967…so it’s been around a while. In 1994 it was made into a TV series.

I read this after visiting Hazel Creek last year and becoming familiar with the story of the North Shore communities. It’s set in the 1920’s Hazel Creek community when the logging business was booming and the push for national parks was also on the forefront. If you liked Christy you’ll like this too.

Heart in the Right Place
by Carolyn Jourdan

A rich memoir written by Carolyn Jourdan, an attorney on Capitol Hill, who moves back to her home in the Tennessee mountains to help with the family medical practice when her mother has a heart attack. Reminded me a little of Doc Hollywood meets Baby Boom and reminded me why I love the rural mountains of the Smokies so darn much.

Lady on the Hill: How Biltmore Estate Became an American Icon
by Howard E. Covington Jr.

Picked this book up at my mother’s house one night and couldn’t stop reading…read it straight through the night until I finished. If you love the Biltmore, you have to know the backstory and history. The Biltmore was built in 1895 by George Vanderbilt, a 250-room Gilded Age mansion and estate.  The Biltmore passed to his grandson William Cecil in the 1960’s whose unique business smarts are probably the only reason it is still around today as a private enterprise and not a housing development. It’s a fascinating story of the rich-rich from the late 1890’s and early 1900’s. The Biltmore is one of the most incredible places on earth.

A Walk in the Woods: Rediscovering America on the Appalachian Trail
by Bill Bryson

A completely entertaining comedic memoir written by Bill Bryson about his “whim” to walk the entire Appalachian Trail. Spoiler alert: they don’t hike the whole thing. But the hilarity of the stories and interactions tell a story all their own. I’ve never read a more honest book about hiking and he pretty much sums up everything I’ve often felt about the risks of bears, cold and wilderness.

Permanent Camp: Poems, Narratives and Renderings from the Smokies
by George Ellison

A book I picked up by Bryson City native George Ellison. It’s full of poems, narratives, renderings, notes and paintings by his wife Elizabeth. He had me at “composition book” and I love his descriptions of the area. You can feel his love of the mountains in his writing. Mr. Ellison also writes weekly for The Smoky Mountain News. You can read all of his articles here.

Bryson City Tales: Stories of a Doctor’s First Year of Practice in the Smoky Mountains
by Walt Larimore MD

The true stories of a young doctor’s first year of medical practice in Bryson City. The first chapter is even set at the Hemlock Inn where we stayed for our first year in the Smoky Mountains. The vignettes of the town have the vibe of a James Herriot meets Mitford. There’s an illustrated map in the book that captures the town of Bryson City in the 1980’s, and our house on hospital hill even shows up in it! After you read the books make sure to take the Larimore tour around town, you can download it here.

The second book in the Bryson City Tales series. There’s a third but it’s not listed here because I didn’t really like it all that much. Half the town loves these books and half the town hates them. Read them for what they are worth: stories of the endearing small town I live in, and one you’ll want to visit after reading. Bryson City is small town USA and still has the simple ways of yesteryear life.

A great resource on the NC side of the Great Smoky Mountains and Bryson City: where to stay, where to eat, what to do. It lists hotels and their amenities in an easy reference guide as well as events to look out for. It’s worth picking up just for the maps inside too. 88 pages of comprehensive “things to do in Bryson City.”

Our Southern Highlanders: Introduction By George Ellison
by Horace Kephart

Horace Kephart wrote and first published this book in 1913 and it’s still around and widely cited. A book about the inhabitants of Appalachia and its mountains. Horace Kephart is buried in Bryson City Cemetery and you can visit his grave which is marked by a huge rock that was brought in from Mount Kephart.

Out Under The Sky Of The Great Smokies: A Personal Journal
by Harvey Broome

The writing of Harvey Broom captivated me. This book, consisting of his personal journal writings, was published after his death. What he writes about Mount LeConte was exactly what I felt when I entered that Narnia-type place. His writing about the Smoky Mountains is timeless and beautiful. I wish I could write like Harvey.

Strangers in High Places: The Story of the Great Smoky Mountains, Expanded Edition
by Michael Frome

The backstory on the creation of the Smoky Mountains National Park and includes detail on the Eastern Cherokee, lumber operations, moonshiners, and the natural Smokies nature.  The most interesting and saddening parts are the power struggles and land transactions that created the park. Many people don’t know that the park wasn’t just federal land sitting there waiting, it came from individual families and farms.

Fontana: A Pocket History of Appalachia
by Lance Holland

The fascinating history of the Fontana Dam and surrounding area.  I love that it includes photos and diagrams. The undertaking of the TVA to build this dam and resulting lake is pretty incredible, and there is the devastating part of the North Shore families who were cut off from their homes when the lake waters rose (hence the “Road to Nowhere).

You can feel the fascination and love of the Smoky Mountains through Mr. Ellison’s writing. I picked this book up in the used book store where I work and was instantly drawn in…especially when I stumbled onto the story of the island park I frequent. A collection of essays that portray the deep, rich cultural heritage of the area.

This book has 21 tours of the western NC backroads that will take you on a rich tour of history and forgotten places so that you can escape the crowds. Each trip is laid out in detail and takes you to the places that are more unknown…the secret rural places you’d discover if you actually drove down those roads you pass and say “I wonder where that would take me.” And it’s not just directions, the detailed descriptions lay out the landscape and the history. For example: The Tour of the Lakes will take you through Bryson City, to Fontana Lake and Lake Cheoah and then to Lake Santeelah (about a 90 mile tour).

Highroad Guide to the North Carolina Mountains
by Lynda McDaniel

A wealth of information about the North Carolina mountains with maps, history, and recommended activities. I love the hand drawn flora and fauna detail and animals to look out for. The book is broken into sections: Grandfather Mountains, Black Mountains, Newfound Mountains, Balsam Mountains, Nantahala Mountains, Snowbird Mountains, Great Smoky Mountains and the Long Trails. Who even knew there were so many mountains?

The most important book you’ll ever buy for hiking the Smoky Mountains. Full of helpful information including maps, distances, and just plain interesting stuff about each hike. Plus it’s small and compact and will fit nicely in a small hiking bag.

Full of interesting information about the Great Smoky Mountains and full of activities for down time and car rides. Now they just need one for adults.

Trees of the Smokies
by Steve Kemp

In 1966, in the Appalachian Mountains of Northeast Georgia, a teacher and his students founded a quarterly magazine that they named Foxfire, after a phosphorescent lichen. In 1972, several of the articles were published in books form and the acclaimed Foxfire series was formed. Much more than “how to” books, the Foxfire series is a publishing phenomenon and a way of life, teaching creative self-sufficiency, the art of natural remedies, handicrafts, and other country folkways, fascinating to everyone interested in rediscovering the virtues of simple living.
-from the back cover of Foxfire 1

And many more in the series! Click here to see all of them.