Menu
You are here: Home / Archives for Life

We didn’t get much snow here last week after that small snowstorm we had. I know it’s because I was too prepared. I’d asked Brett to cut about 5 weeks worth of wood and I had at least 2 weeks worth of food (even though I ate all the good stuff on day 1). But we could see snow, way up on the mountains in the distance. Beautiful powdered mountains: 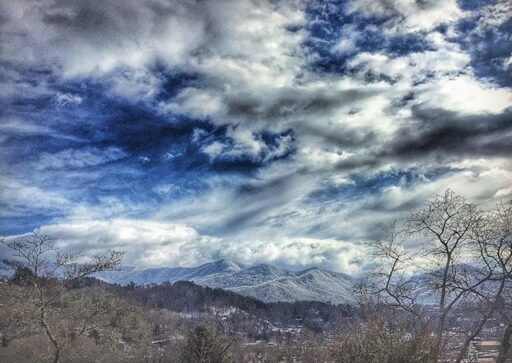 This was my view the past few days…the birds came back out. Boo has her little color-coded Audubon bird book that she uses to figure out who is who. Like the tufted titmice you see here: 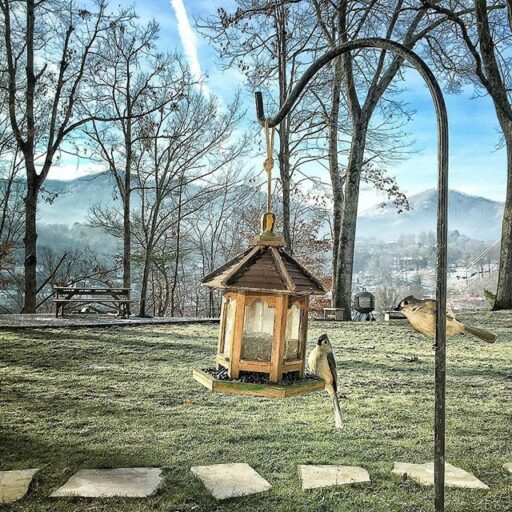 The titmouse is a song bird, I think their little tune is beautiful. I often wonder why Harper Lee chose the mockingbird for the title of her novel, what if she’d chased a different song bird? To Kill a Titmouse? To Kill a Red Breasted Robin? Things might be so different.

Before the tiny bit of snow melted I took a few of my little railroad miniatures (see all HO scale models here) out in the snow. It’s fun to play with scale. This little guy is smaller than the sunflower seeds I fed the birds. 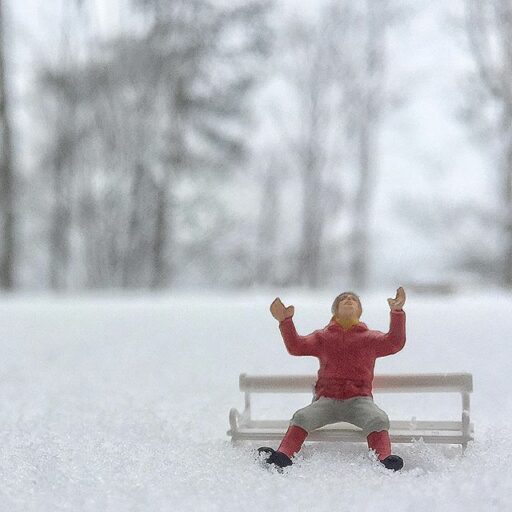 And while I was doing that, Boo and her friend built tiny snowmen in the road to see if anyone would run over them. Kind of like their own version of “What Would You Do?” Our elderly next door neighbors went out of their way to avoid crushing the poor stationary men-of-snow. 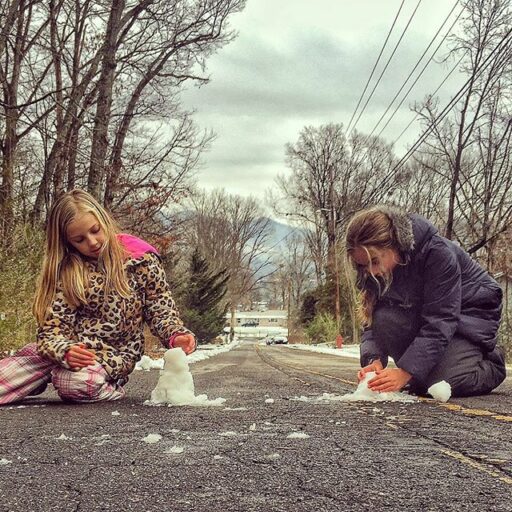 They didn’t even know we were watching. Where’s John Quiñones when you need him?

When I was in the 4th grade I tried out for basketball. I’d never played before. I don’t remember the drills we had to do but I do remember a vertical jump test because I remember my feet feeling like they barely left the ground. Long story short: I was told that I wouldn’t make the team. I couldn’t jump high enough.

I was always kind of uncoordinated growing up, mostly because my scrawny legs were at least 2/3s  of my height.  Maybe I could have played basketball and volleyball but it would have taken a lot of work. I didn’t have a passion around any of that so it’s just as well that I didn’t make the team. Having doors closed so quickly to sports sent me through other open doors that I still have with me today like drawing, painting, and a love of books.

But even with the new open doors the other side of the story is that for almost 25 years I’ve told myself over and over: I can’t jump. When I joined CrossFit a few months back I quickly found out about box jumps. Translation: jumping onto a box. I knew I wouldn’t be able to do that and so every single time we have had box jumps in the workout I’ve said: I don’t have a box jump. And I would just do step-ups instead. Sometimes I would just stack a few plates and do small jumps. It felt like I was only jumping six inches in the air which only reiterated the story I’ve been telling myself: I can’t jump.

A few days ago I ventured through the snowy morning to the 8:30 class and there were only two of us that were able to show up, plus our coach Jama. When I used the “I don’t have a box jump” excuse again Jama stacked up a few plates that I could easily jump onto and I used those in the workout. Then slowly he kept adding just a little more height. It was easy to tackle. Then Jama pulled the wood box up to the plates…to show me that I had been jumping onto plates that were HIGHER than the box. The brain has way too much power to hold me back sometimes.

This is the video my 2nd jump…ever: (direct link here if it doesn’t show up)

Worked @lilblueboo slow until unveiling the box was lower than her previous jump. This is her second box jump as I didn’t want to make a big deal about the first. Now she’s box jumping for fun. #winning #crossfit #whyicoach #dontmisssnowdays

I think I’ve watched that clip a total of 6,000 times because I still can’t believe it. And I’ve watched it a total of 6,000 times because I can’t believe that’s me. I even paused it to see how high my feet actually got and I more than clear the box, instead of jumping only 6 inches: I’m 6 inches above the box. Flashback just a few years to 2012 and Cisplatin chemotherapy…I never thought my bones and joints would ever recover from any of that. Now I’m jumping onto boxes.

I was excited when Boo asked if she could start CrossFit Kids this past summer. She was the only girl at first and I wasn’t sure how long it would last because she hasn’t found much enjoyment in other co-ed sports: 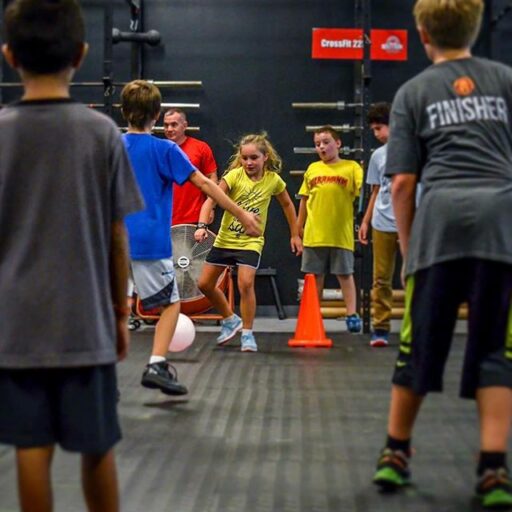 Another long story short: her bulletin board now includes puppies, ribbons, coloring pages of horses, and a picture of athlete Lauren Fisher: 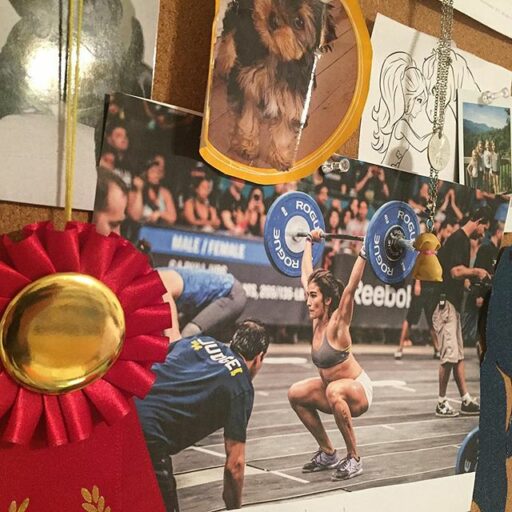 My doctor asked me last winter if I was exercising. I told her: no, should I be?  Of course the answer was yes, if I wanted to keep my heart strong. My friend Jodi asked if I wanted to join her one day to see what CrossFit was all about. I’d always been scared to, intimidated of what might lie beyond the door. But that first day was awesome, and everything was scaled right to where I needed it to. And everyone was so friendly and encouraging. I was hooked.

I think things happen to you in your life when you most need them. Sometimes I wish I had discovered CrossFit earlier but then maybe I wouldn’t have had the right coaches or found such an inclusive community to make me stick with it. And maybe Boo would have never had the opportunity to discover CrossFit for herself. It’s a cool feeling to be learning along side your kid. She gets to see the progression of her mother sticking it out and becoming braver and stronger by the day, and I get to see her grow up strong, confident and brave: 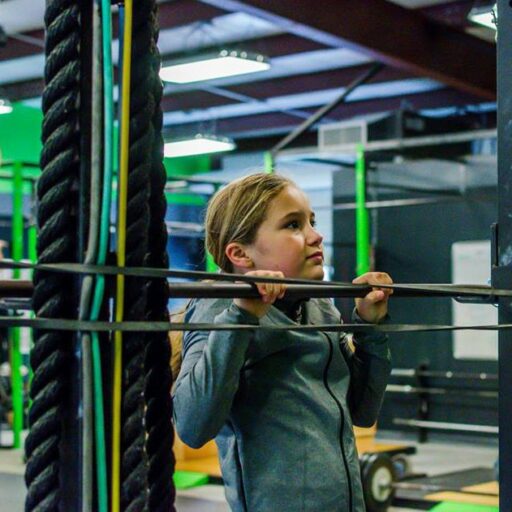 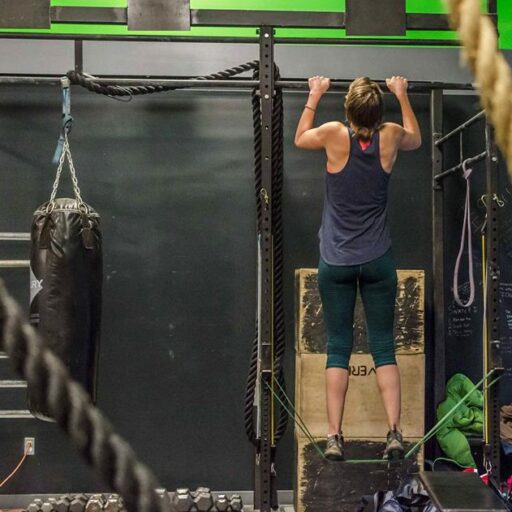 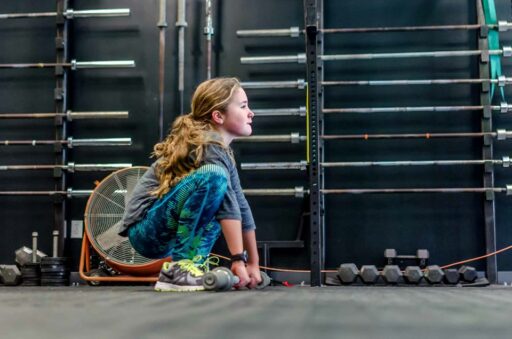 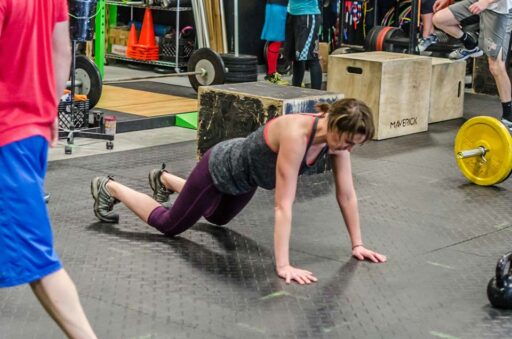 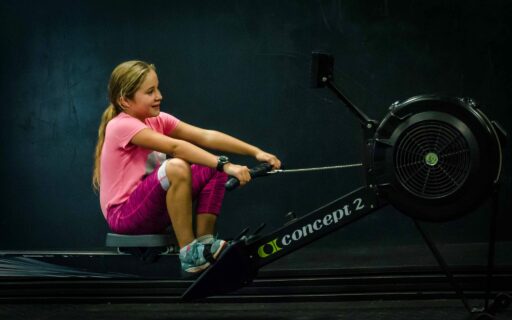 Yesterday everyone had left our morning workout except for our two coaches Amy and Jama. I asked Amy if she’d spot me while I tried to do a handstand against the wall. I’d been afraid to try one up until then but the box jump gave me a little more courage. Amy showed me where to put my hands down and I took a deep breath before stepping back and flipping myself over. I did it on the first try and Amy said I could easily do it again on my own. And so I did…flipping myself up again and again onto the wall.

Today sitting around the house I’ve had the urge to just put my hands down and flip up onto the wall. And it’s funny to think that just yesterday morning I thought I couldn’t do it.

Fear can be paralyzing. Sometimes putting fear in its place requires a little boldness here and there because when you are bold: mighty forces will come to your aid.

I picked up a 5 cent book the other day…I’ve had a lot of luck with those recently:

Be Bold – that was no exhortation to be reckless or foolhardy. Boldness meant a deliberate decision, from time to time, to bite off more than you were sure you could chew. And there was nothing vague or mysterious about the mighty forces referred to. They were the latent powers that all of us possess: energy, skill, sound judgement, creative ideas – yes even physical strength and endurance in far greater measure than most of us realize. […] In other words, if you are bold enough, even the laws of motion will come to your aid. This personality trait – a willingness to put yourself in a position where you will have to extend yourself to the utmost – is not one that can be acquired overnight. But it can be taught to children and developed in adults. Confidence is a cumulative thing.

–A Touch of Wonder, by Arthur Gordon

Confidence is a cumulative thing. Thank you Jama and Amy (CrossFit 2232) for teaching that…to me…and my kid. We are both growing up strong.

P.S. A big thanks to Terry Bradley @thunderbird_12 for all the amazing photography he does each week, often picking up the camera in between his own reps just to capture everyone else.

First snow day of 2016 in Bryson City. It finally snowed and Boo was so excited when she woke up. So was I obviously: 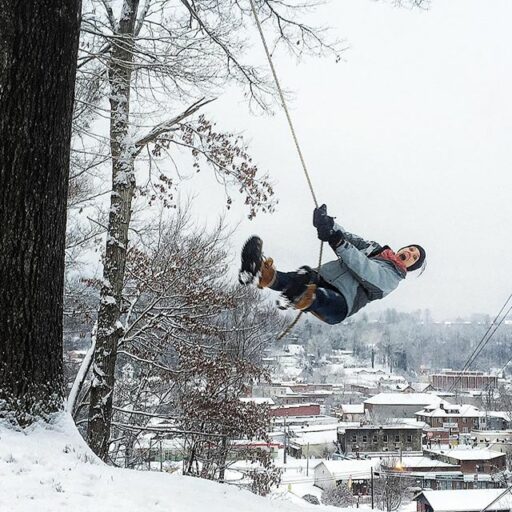 There wasn’t much snow first thing in the morning and so I ventured into town to volunteer at the library’s used book store. It was a little slow today, which I anticipated, so I brought along my new Heart Mag to read: 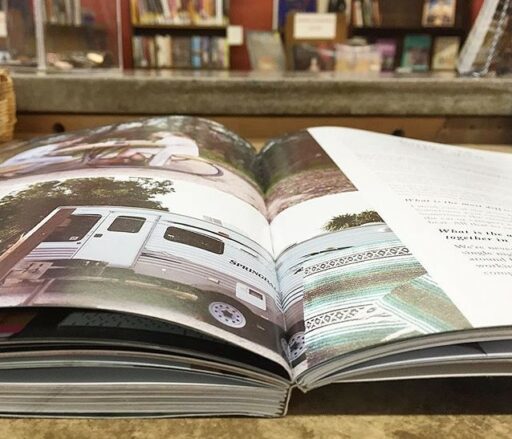 A little after lunch the snow started to accumulate and stick and I headed home: 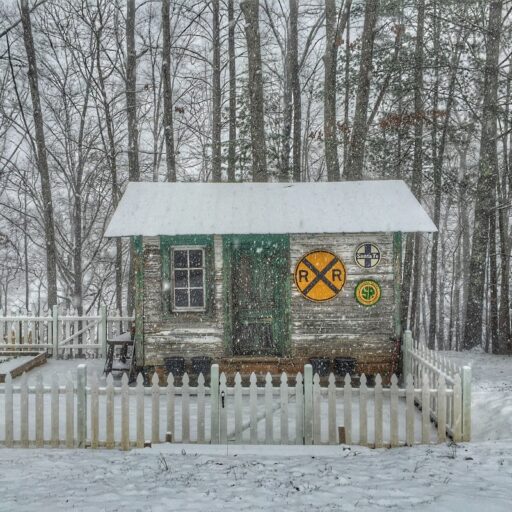 I love how cute the train depot looks in the snow. I could take a million photos of it: 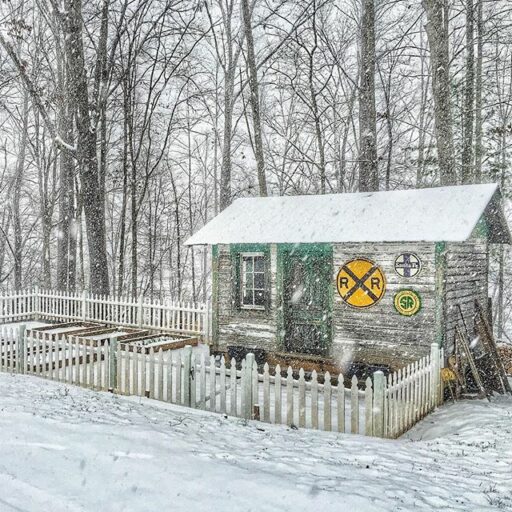 After lunch Boo played in the snow with a new friend up the street for a while and then we walked over to our friend Mindy’s house to sled this afternoon. Action shot before a wipeout: 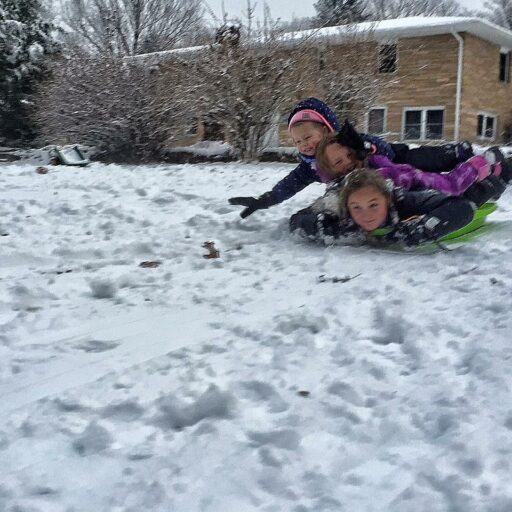 Our friend Tim has this cool sheep wagon that I could take a million photos of too: 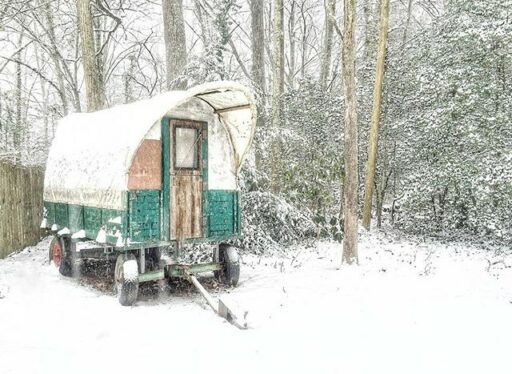 Boo swinging on her tree swing until dark, over the town: 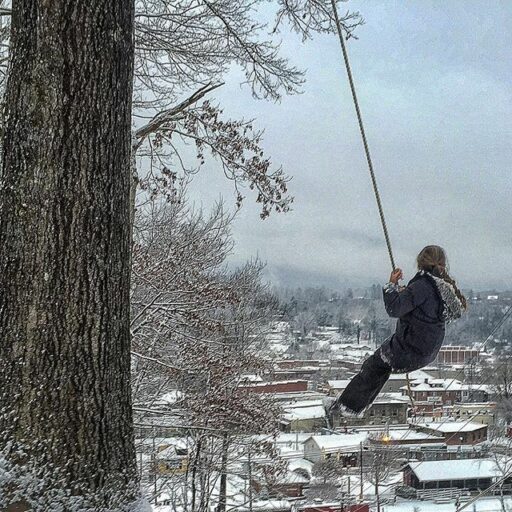 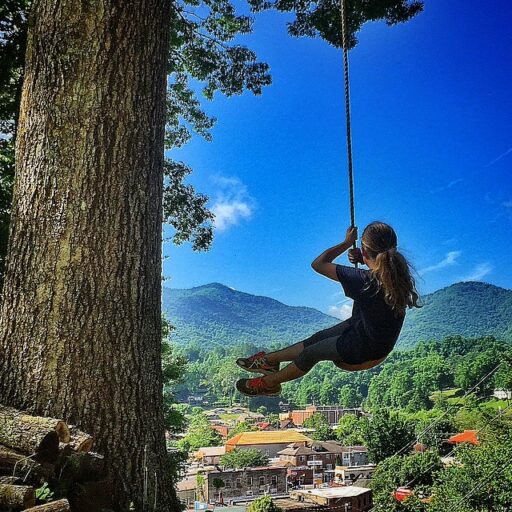 I can’t figure out which season I like the most. Spring is so amazing with all the wildflowers in the national park and then summer comes along with all the river activities. Then there is fall with the show of color and winter with the possibility of snow. I love snow as long as I don’t have to go anywhere. I enjoy being stuck with my family and all my books.  And I so enjoy the beauty of the snow covered mountains. I just don’t enjoy being cold so I do spend a lot of time by the fire. And that means a lot of firewood. Brett and Boo spent last week chopping: 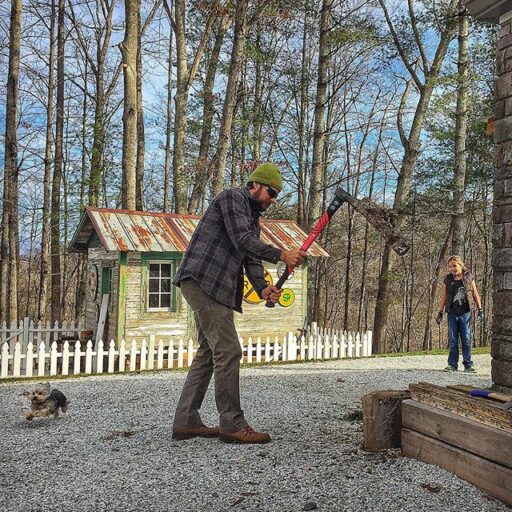 Brett probably hates that photo because I caught him mid-swing trying to knock a piece of wood off the ax, but Max looks so darn funny. Max looks like he’s running for his life but really he just saw me and wanted a hug.

Hey…stay warm this weekend everyone! Looks like there is a lot of snow coming to the east coast!