On the menu today:

C – Cyclophosphamide (large bag): This is the drug that Dr. L says can cause leukemia later in life….it’s the biggest risk. That went in one ear and out the other…..I just don’t think about stuff like that.

O – Vincristine (IV Injection): Made from plants! It keeps parts of the cells from working that are needed for cell division. Doesn’t start with an O. 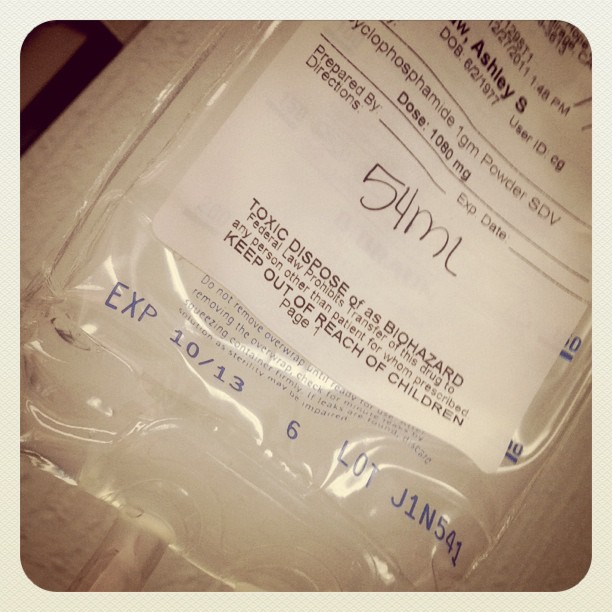 It’s been 2 hours since I left the infusion center. My friend Kelly brought over some yummy pesto chicken and I was able to eat some of that for dinner. I feel like my ears are stopped up but most noises make me wince a little. I feel really uncoordinated and tired. My lips and tip of my tongue are numb. The nerves on my incision flair up…..I get into a defensive position when people come at me too quickly. They pump you so full of nausea medication and fluids before chemo drugs are added that I’m not sure nausea is possible at this point right now…..that’s a great thing. Drugs have come a long way.

I had a few bad days last week with joint pain and fatigue…..and the only time I really felt nauseous was after I ate so I just made sure to take nausea medicine well in advance. Every day is different. Tomorrow I just go in for an injection Neulasta…..it will help stimulate the growth of “healthy” white blood cells that will help me fight off any infections. I never knew what a white blood cell was until last week.

Dr. L thinks it’s too risky to put a port in right now. Surgery is surgery. Remember how my veins looked post surgery? Well, they aren’t that bad now….and they’ll get a little rest in between treatments so for right now we’ve decided against it and I’m totally fine with that. They’ll probably just put in a PICC line if it’s needed.

My scalp has been tingling at night….I wonder if the drugs are eating my hair. It’s only thinning right now…..and that’s part of my body thinking it was pregnant for so long and 8 weeks of Methotrexate injections.

Sitting in the infusion center is an experience….it could be really depressing if you let it be. Today it was me on one side and 4 much older women on the other side. They stared at me the whole time….literally stared.  I would chat with them and they would smile back but it was a little awkward for a bit.  As one woman was leaving she stopped and said “I hope you don’t have to come here much longer. You are so young.” I don’t know….maybe that’s why they were staring. They were pleasant, curious stares……maybe I entertained them for the day.

I was reading some brochures on chemotherapy that they had laying around and it said to refrain from oral sex right after treatments because you can transfer the chemo drugs to your partner….really?! Because that’s exactly what I was thinking about doing after  a day of chemo….oral sex. I could think of so much other information that I would have found more useful than that. But if any of you happened to have chemotherapy today, no oral sex, okay?

Well, that’s it for tonight. I’m headed to bed in a bit. Boo and Grandma are playing with the Barbie dream house. There’s a ton of drama in that house: love quarrels, kidnapped babies, jail…..oh but Grandma’s Barbie invited Boo’s Barbie to bible study.