Give a cancer cell an inch…..it will take a mile. My HCG levels were at 78 this week……up from 37 last week. Yuck. I had my time off from chemo treatment and they decided they’d take advantage. It makes me feel better that we’ve switched to a more aggressive treatment though……and that Dr. L is going to be making them more frequent. That means less time for the cancer cells to take advantage of any break time.

I had another day of chemotherapy today. I felt nauseous all morning but I turned a corner about 1pm. I had a great night last night. I watched a few Lifetime movies that I had recorded and fell asleep watching. The last time around I barely slept at all after the large bag of Methotrexate…and ended sleeping on the couch so I could stick my feet under the couch cushions. I learned a trick for restless legs…..slather legs and feet with lotion……peppermint if you can find it. My hubby does it for his RLS too and it works.

Here’s one thing I’ve learned recently…..if you get cancer…..everyone likes to start imposing new rules on you:

Me: I think I’ll just add some Splenda to this.
Lisa: Splenda causes cancer.
Me: I already have cancer.

I love this photo my friend Mollie sent me. It’s Adrien Brody and a Choose Joy bracelet. 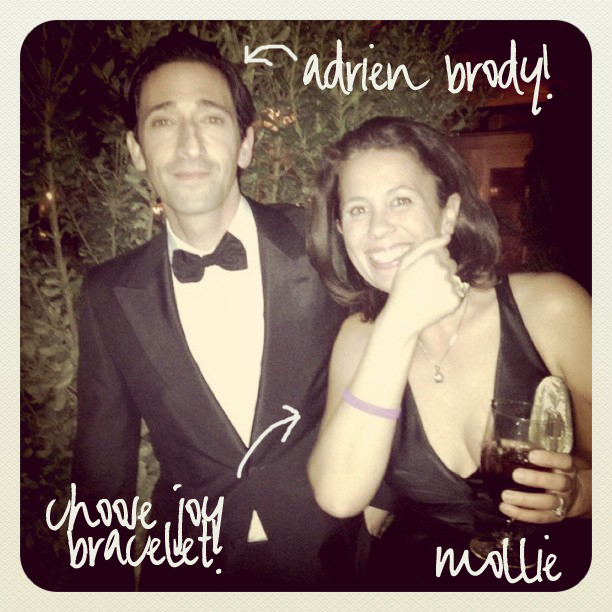 Not much else new today. Praying for a good night of sleep and then I’ll wake up to a great new day tomorrow!