Today I finally feel human again. The past 4 days I’ve been down for the count. That Cisplatin stuff messes with the stomach like you wouldn’t believe. I had the full 5 hour drip on Thursday. Mr. LBB asks what it feels like to be on Cisplatin….I told him imagine the worst hangover in history…..then multiply it by 100.

Cisplatin Side Effect Log:
Friday: Shakes, nausea. I had that feeling when you get up to do something and then you can’t make it back to your lying down position fast enough.
Saturday: I felt better in the morning so took Boo to Trader Joe’s. It wiped me out the rest of the day. My stomach felt so sensitive that it made the rest of my body ache. Nausea that makes your breathing labored.
Sunday: We tried to go to breakfast….I felt ill so we went home. Mr. LBB made me breakfast in bed.
Monday: Woke up feeling ick….but felt better as the day went on.

Anyways, sorry Cisplatin….but you can suck it.

I sound like a wrestler right? No surprise. I once went to Monday Night Raw to see the Rock. I was way down in the first few rows. It was awesome. I grew up on wrestling. My dad was always watching Nascar or wrestling when we were growing up…..but only in between golf. I had this theory when I lived in Charlotte that there were 10 Ric Flairs. Seriously. Everywhere I went I saw Ric Flair. Once I woke up early in high school so I’d be the first one at the mall to run an errand….and guess who was there bright and early too? Yep, Ric Flair. I’d go to the grocery store and I’d see Ric Flair. I’d be pumping gas and Ric Flair would be pumping gas right next to me. I saw him ALL OVER TOWN…..so much so that there HAD to be TEN Ric Flairs running around Charlotte, NC.

Anyways, I never said a word to him. I never got a picture with him. I was afraid he’d think I was a stalker. So here I am with Ric Flair…..with the long white hair and awesome 80’s sunglasses that I like to remember him by: 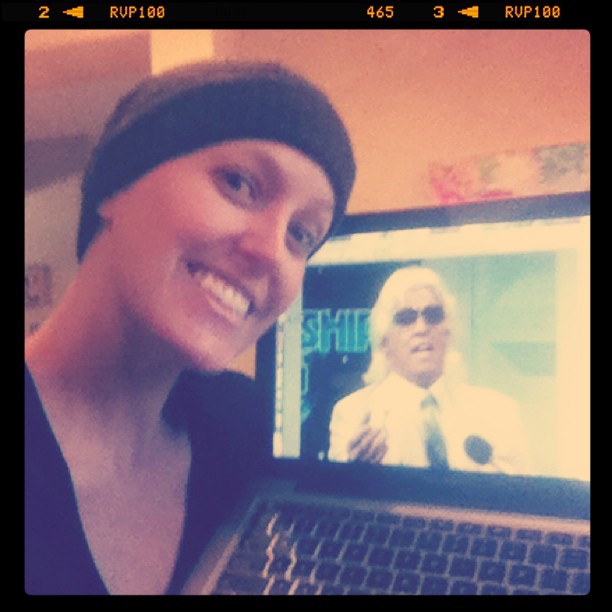 Anyways, if you don’t know who Ric Flair is…..then you obviously didn’t grow up around wrestling. I’m so sorry. Now who can get me a picture of Ric Flair wearing a Choose Joy bracelet……Woooooo!!!!