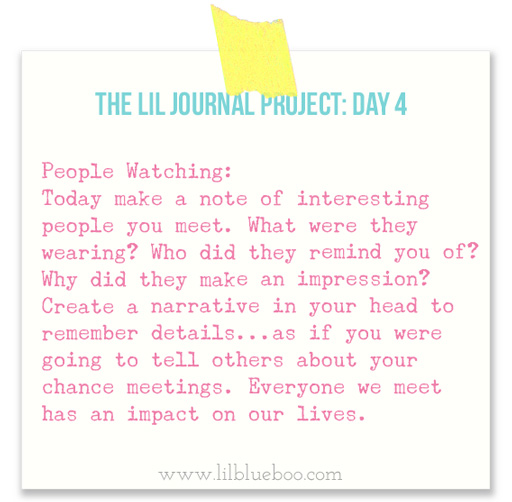 I people watch 24/7/365. It’s one of my favorite things to do.  It’s why I really don’t mind waiting in line, or being stuck in traffic….there’s always something to watch. I meet the most interesting people and I make mental memories of them.  (I’ll note here that it’s usually complete strangers I’m “people-watching”…..so my friends won’t think I’m making notes about them now…..) I’ll even text myself little reminders about a conversation or an event. When I write later sometimes it’s just fragments of a meeting and other times it’s a rambling description of an entire event…..it’s my journal, it’s not like I’m writing my journal for a literary award or anything.

At the pet store: A woman buying crickets for her lizards. (Funny….. I’m buying crickets for my lizard too….whoever would have thought I would be in this position.) This woman had way too much info for me…..like how her geckos were well behaved and how she had “house trained” her lizards. I think I brought it upon myself though when I asked what lizard poop looked like (for the record….I still don’t know what it looks like). This woman’s lizards are trained to use the bathroom in a certain area of the cage. I’m convinced that most animals pick a certain area of the cage….who wants to hang out in poop. Anyway, back on track….apparently she wraps up a paper towel to be a “pee pad” and puts it in the corner of the cage. She mentioned that she caught most of her lizards in the wild. I think she must spend a lot of time outside. Her skin was overly tan and I could tell she’d probably never applied sunscreen before.  I think once your skin gets to a certain “leather” you don’t need sunscreen. I’ll have to ask someone about that.  Her hair was grey and past her hips…..kind of in the style of the Crocodile Hunter’s wife…..bangs and all.  She was wearing acid washed jeans and a lavender top.  (Aside: I wonder if Crocodile Dundee ever wore sunscreen?) She offered up that she lived out at the Salton Sea.  I asked about the “flats” and if it was a good time to visit for photography……since I’ve always wanted to snap some of the abandoned areas.  She told me not to go…..that the flats were filled with “rapists and murderers.” I have no idea if that’s true.  She told me that the flats were originally a military base. I pretended I didn’t know that tidbit of info….she seemed like she could be easily annoyed….and I didn’t want her to think I was a know-it-all. She seemed a little like a know-it-all type.  Us know-it-alls have great “know-it-all-radar.”  Her husband walked out the front door with the crickets and she yelled “ARE YOU GOING TO PAY FOR THOSE?!” He was really embarrassed. I imagined she and her husband living out at the Salton Sea, armed with shotguns to ward off the rapists and murderers…..and a house full of lizards…..but really smart, potty-trained lizards.