Menu
You are here: Home / Uncategorized / A Glimpse of the World Without Us

My day in reverse:

6. I drove back from San Diego. I like the solitary, dark drive over the mountain, except for the thought of breaking down and being kidnapped by someone with a chainsaw.  I stopped at the vista point on my way back from San Diego.   It was dark and I completely forgot that dark overlooks are reserved for couples making out. Awkward lesson learned. 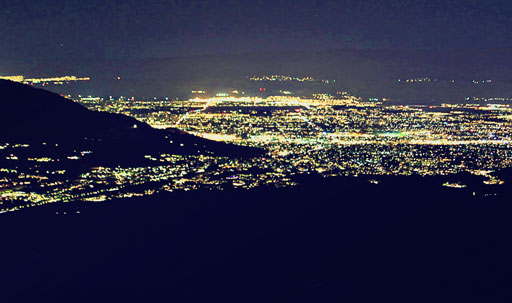 4.  I was in San Diego for the day for an event. I wrote about the the fasola music on the 8th, and someone emailed me yesterday morning with the address where a group in San Diego happens to meet on the 2nd Sunday of every month.  Yesterday was the 2nd Sunday of the month. As I got in my car to head back to the desert, I plugged the address of a church into my GPS….the address where the group meets.  I was exhausted but the address was only 6 miles away.  Something in me told me to go.   My GPS led me to a small church nestled in between row houses and a hospital. I parked my car. I knew I was in the right place because I heard the vibrations of the singing from the front door….a wall of sound. I snuck in and sat on the floor behind the singers trying to remain unnoticed. I just wanted to listen, so curious to hear the music in person. Someone noticed me and they stopped singing.

Woman: Join us. We can make room.
Me: Oh, I’m just hear to listen, but thank you.

Then several of them stood up and waved me over moving their chairs aside. I grabbed a chair and pull it up to the group. I sat at an angle to their square formation. Someone handed me a book. They began singing their next song and I sat mesmerized, their hands moving up and down to the pace.

Woman: Would you like make a request?
Me: Oh, well, I only know one: Idumea. But I’ll probably cry if you sing it.  I think it’s really emotional.

This is what they sang: (direct link here)

And they sang their hearts out.  The wall of sound was incredible.  And yes, tears streamed down my face.  When they finished the young woman next to me hugged me.  They told me that one of their group, a man who was 85 years old had just passed away, and they were practicing the songs for his funeral.

I asked if I could take a photo of another woman’s book, I had stared at the aged pages as she sang. The edges of the pages held years of finger prints, reminding me of the gold leafing added to some bibles.  The stitches of the cover were loose, some areas hanging by a thread. As I snapped the camera she told me the cover had been made by a woman years ago from scraps of old clothes, made to help raise money for bus travel to sings. 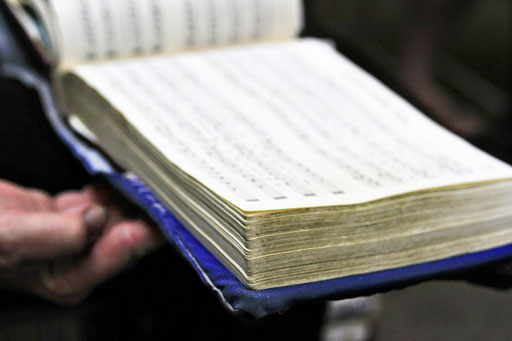 As I left, a woman slipped the Sacred Harp book I’d been using, full of notes from a couple who owned it before, into my bag.  My fingers had traced the notes throughout the book as the group sang:  A favorite.  Sang on 1/7/98. For Mary’s Funeral. I told her I wanted to pay for the book and she said, “No, I think this one was meant for you.”

(When I told Brett this story he said: how does this stuff happen to you? I told him: because I carry random addresses with me and plug them into my GPS.)

3. At an event at Michaels I met an eclectic group: Marlene who was camping with her husband in the area, Jennifer a lecturer on statistics research, Lucy and her mother who used to work on submarines in the Navy, Brandi and Liz, both sister-in-laws. All very nice people to have met.

When I met Patty and her daughter Oleanna, we discovered that we had Winston-Salem, NC in common, all having lived there at around the same time. The world is very small, I think.  Oleanna told me about her father’s artwork involving dead fish from the Salton Sea.  I was fascinated.  I listened to Oleanna tell me about the process her dad uses to preserve the dead fish. I can’t stand dead fish, but the idea of preserving them and adding tiny scarves in the name of art could change my mind.

Me: So basically your husband performs fish taxidermy at your house.
Patty: Yes.
Me: I’m so jealous.

*if C-3PO was a fish, and his head was ripped off.

Maybe you don’t know what the Salton Sea is.  I must share with you…even though I’m sure I’ve thoroughly confused you with the tangent of bipedal, humanoid protocol droid-fish.  This video will sum it all up very nicely.   The Salton Sea in a nutshell…the “post-apocalyptic hell-hole” of attraction. You can see it from the vista overlook above the desert….even at night.  It’s the largest body of water in California, it’s the big dark spot if you look south east. I agree that the Salton Sea gives “glimpses of what the world will look like without us”: (direct link)

When I drive in the middle of nowhere, sometimes I think I’m stuck in an abandoned movie set. 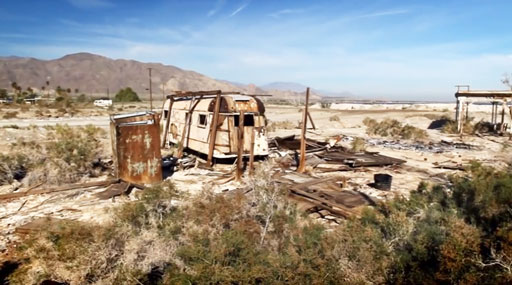 (from The Accidental Sea)

And then there’s Salvation Mountain:

“At the end of it all, a shocking burst of color, a mountain made from mud and straw, telephone poles and truck tires, and 100,000 gallons of paint. All of it built by one man, over 30 years.” 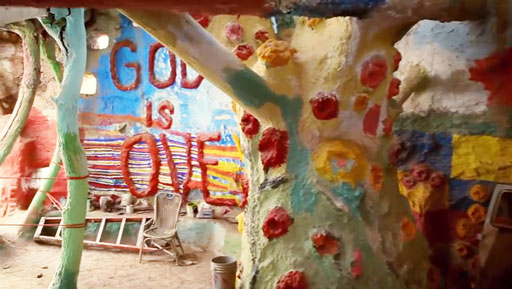 (from The Accidental Sea)

2. On my drive to San Diego I allowed 3 hours to get there. First, I got stuck in the traffic of a mud run outside of Temecula. I was tempted to stop and take photos.  As I got close to San Diego I hit standstill traffic.   I decided to pull off the freeway to take the side roads figuring that there was an accident.  I passed a strange man standing in the median, then I saw a large sign that said “Stadium Event Today.”

I don’t watch football so of course I wouldn’t know this. All the sudden I was in front of a large stadium, actually I was driving INTO the stadium.

1. I woke up. With premonitions.

P.S. I skipped #5.  That’s because it’s someone else’s story to tell…I haven’t gotten permission yet to tell it.

P.P.S. The church I went to was the First Unitarian Church.   I want to thank the San Diego FaSoLa group for so warmly welcoming a stranger, who just happened to be passing through town.

P.P.P.S. Thank you Oleanna for drawing with me for an hour!