Menu
You are here: Home / Christianity / There is no edge of anything

in my element = where i belong

I spent the weekend up in the mountains at a women’s retreat. At first glance, you might think I was out of my element because I was the youngest church member there. There did happen to be a few high school age girls because the youth director had brought them with her.  One young youth was in my group and when it came time to share why each of us had decided to attend the retreat she rolled her eyes and said, “because they made me.”  It was all I could do to hold back laughter at the dramatic way she said it.  It reminded me of myself at that age.  Next to the young girl sat 93-year-old Ethel.  Ethel’s answer was very similar, “because I live with my daughter now and there would be no one to watch over me.” Ethel and the young girl immediately had something in common.

So here I was in a group of 53 women, ranging in age from 17 years old to 93 years old, brought together to learn, sing, praise, rest, and play.  I’m not very extroverted with my faith.  I’ll never be the person that yells “Praise God” at the top of my lungs.  But this was my element.  Why? Because I can make any time, place, or group my element.  I could be stuck in traffic for an hour and be perfectly happy…..which is what happened on the drive up. And I heard some complaining about it when I first got there, but not from my car. In my car, we talked about librarians, argued whether squirrels are just rats in prettier clothes, and how to find a meteorites. Seriously, if you get stuck with me in a car for a few hours you never know what subjects you’ll be covering. I need a bumper sticker with a disclaimer.

Friend: We are lost.
Me: Don’t worry I have a compass on my phone.
I shake the compass a few times.
Me: Nevermind, I don’t know how to use a compass.

There was a men’s retreat going on at the same time as our women’s retreat.  The first few men I saw had what looked like Amish beards, so I told a few of the gals that I suspected it was an Amish retreat (I am known to just make things up when I don’t know the answer).   At breakfast the next morning, where we share the mess hall with the men, someone said:

These men are NOT Amish, they look more like the Hell’s Angels.

I did see a few motorcycle shirts. Close enough. If they were Amish, 90% of them had shaved their beards off by breakfast. These guys were a little rough around the edges…yay for interesting.

The first man I met was named Lou.  I ran into Lou at every meal.  We could not be more opposite in the way we express our faith.  He says “Praise God” after every sentence. I say “awesome” or “cool” after every sentence, but then Lou would also say “Praise God” after every one of my sentences too, almost as if he was punctuating them.  You can’t help but be awe struck around someone like Lou, how one human being can be so high on life, full of hope, and intent on spreading the love of God.  He told me about the number of times he came close to death.  He told me about the miracles that he had witnessed. He told me about his pastor, his mentor. He told me I would do great things for God, that he could feel it.  It moved me to tears.  My friend Shivaun asked for a blessing from him and I became stuck in a circle of prayer, which is the closest I came to being out of my element. I secretly glared at Shivaun for putting me in a claustrophobic circle but I stayed still because I didn’t want to hurt Lou’s feelings. But then she asked to take a photo of us….and I’m glad she did because now I have a photo of Lou:

Lou and I freezing at 8:30am in the morning: 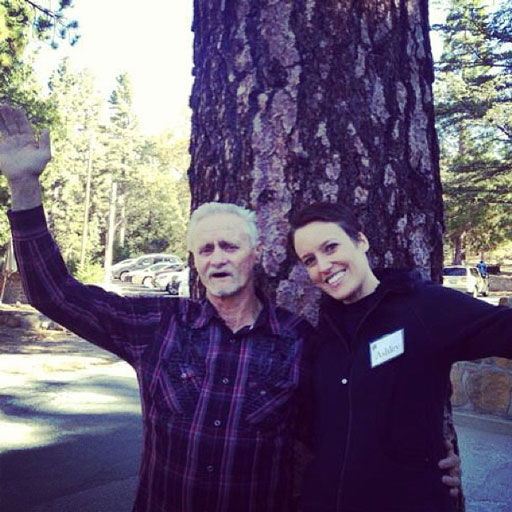 Lou is someone I’ll never forget.  He’s a walking miracle, salt of the earth, a humble shepherd. Do not neglect to show hospitality to strangers, for by this some have entertained angels without knowing it.  True that.

The whole retreat made me realize how important it is to bring women of all ages together. Even when it’s uncomfortable for some. There was some heavy subject content. The speaker Trevekka Olkholm, author of Kingdom Family, talked about the seven saving graces, and to do that you have to talk about sin. I loved what I learned, she did such a great job. Funny though, the word sin reminds me of church as a kid…so does the word Satan. I just imagine the SNL church lady sitting on my shoulder too.  I shared my favorite quote from Tuesday’s with Morrie when we were on the subject of envy:

One of my friends after one of the sessions said, “you know, before this I thought this wouldn’t be my crowd, that I would never be accepted by these women because they all seem to have a lot of money.”

I asked her, “Do you think that is about you or them…because I know that some of these women don’t have much in monetary terms.”

She answered, “Oh it’s definitely about me.” I thought this was so amazing that she had realized she was the one putting up a barrier, not the other women.  How often do we do that?  Pre-judging others when really we all just have the same insecurities. We all just want to be liked and accepted.

In the small groups we talked about the meaning of “wholly” and “holy” but all I could think about was the word “holey” and myself as Swiss cheese. No one had a clue to what I was talking about. 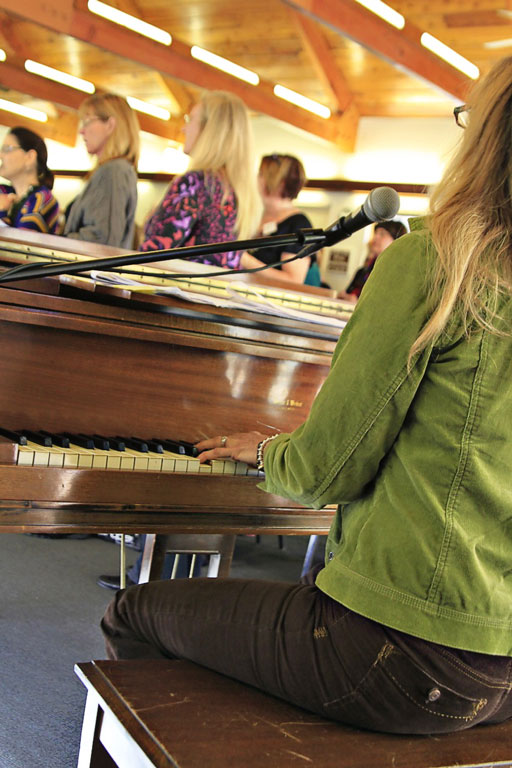 Shivaun and I escaped during free time to roam the town of Idyllwild…actually we were looking for a post office.  Shivaun writes at least one letter a day which I’ll have to write a post about another day. She wrote about 10 letters at the retreat. I was determined to find the post office because I thought it would be nice for the letters to be postmarked “Idyllwild.”   Once I get something like that in my head I can’t get rid of it…I had permanent tractor beam lasers attached to the idea of the Idyllwild post office. We ended up getting lost down a long skinny dirt road. I was being touristy and curious because obviously they wouldn’t put a post office down a long skinny dirt road.  As the car turned a corner, a huge group of mountain bikers were getting ready to start what looked like a race. I slammed on the brakes and I closed my eyes for a second (because if you close your eyes you become invisible. Toddler fact.) As I opened my eyes again the bikers proceeded to bike around the car…..I’d split the race in two. It reminded me of the time in Ireland when my dad had us stuck in a herd of sheep.

We finally found the post office after driving 400 miles in a town that is only about 2 miles from end to end.  We found it only because I rolled down the window and we both yelled at the top of our lungs in unison, “DO YOU KNOW WHERE THE POST OFFICE IS?” The two people we asked were art students.  They jumped back and the girl said, “Whoa. You guys are intense.” We agreed. We are intense.

After the post office, we stopped at a used book store called Bubba’s Books. Steve runs Bubba’s Books.  Steve is the nicest guy in Idyllwild.  He also has the best used book selection. Seriously.  It’s because he’s selective about what he takes in. Next time you go to Idyllwild stop and see Steve and tell him “Ashley with the name tag” sent you. 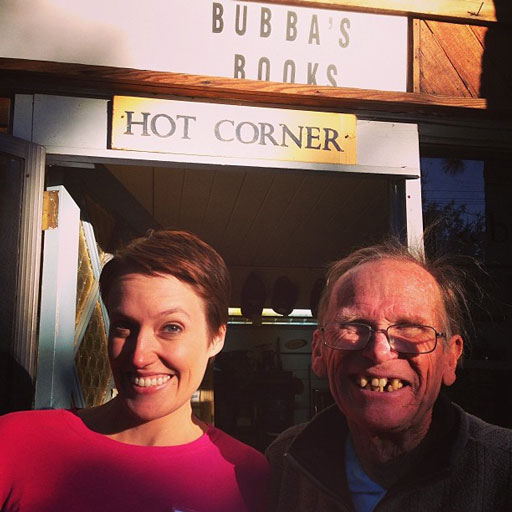 I forgot my wallet. Shivaun only had $7.00 (less postage for how many letters she mailed.) But she bought me this book: 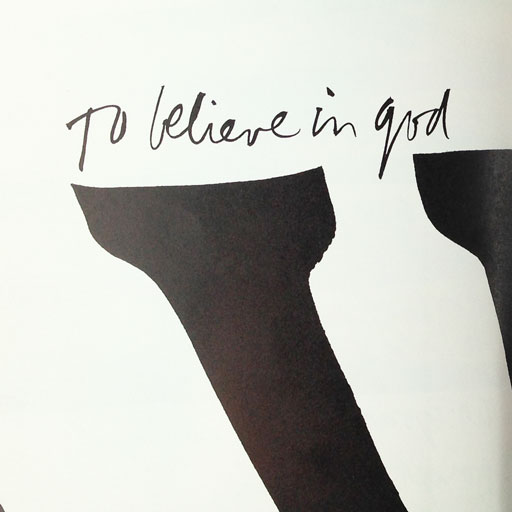 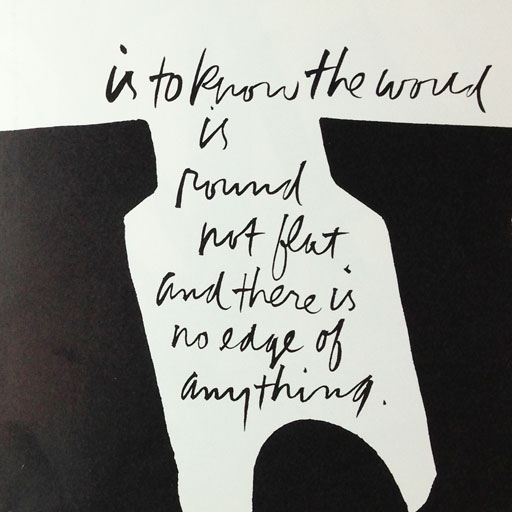 The title is actually: To Believe in God by Joseph Pintauro and Sister Corita.

From the dust jacket:

“To believe in God is an irresistible invitation to a joyous participation in life….. ‘The purpose of art,’ she says, ‘is to alert people to the things they might have missed.”

Shivaun inscribed it before we even left the bookstore.  Best gift ever: 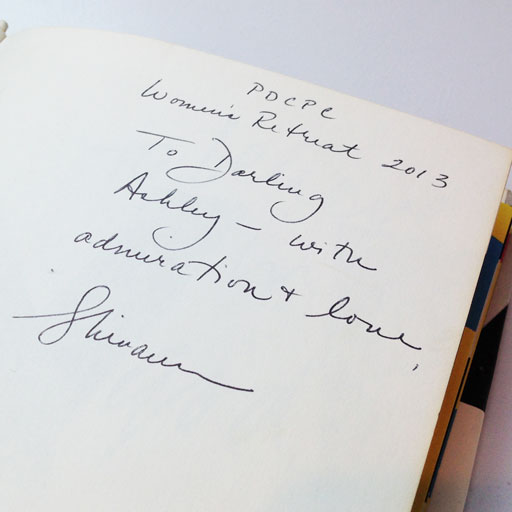 Me and Shivaun at Bubba’s Books: 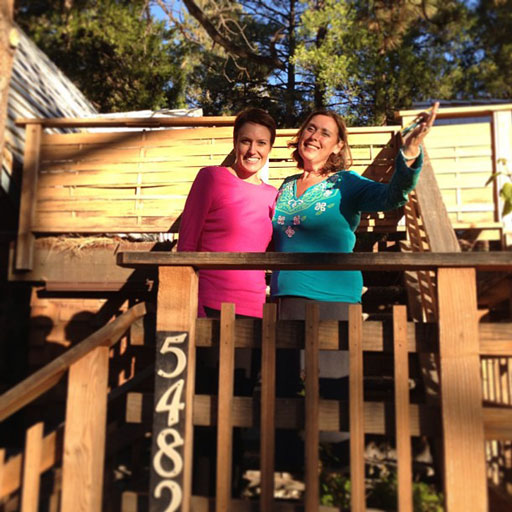 On the last day, when we were all at breakfast, the men from the other conference all stood up at the same time and serenaded Ethel.

As Ethel stood up, balanced on her cane, she smiled at the large group of men across the room.  They bellowed out their song to her as if she was own their dear mother.   I have no clue whose idea it was, but it brought tears to everyone’s eyes. 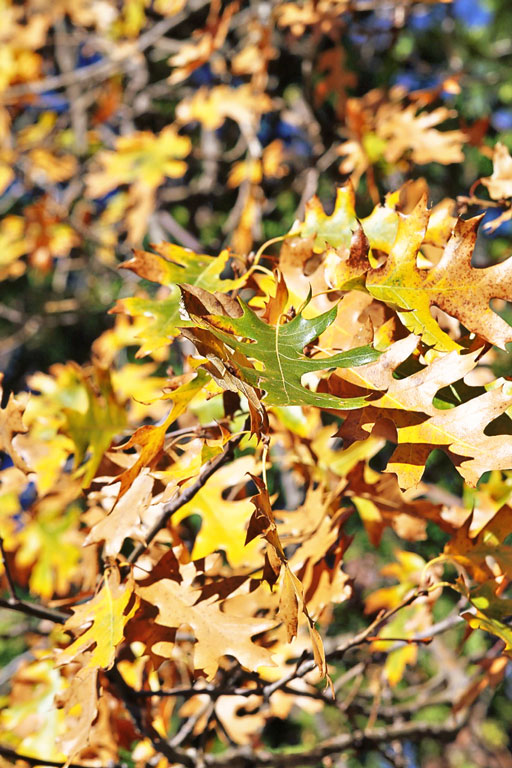 The motley man crew, the women ranging from ages 17 to 93, sleeping in a sleeping bag, getting lost in a small town, meeting Lou and finding Steve…..I allow myself to float in, out, around and between it all.

It’s all about having an open heart. I am like a sponge.  Just saying yes and seeing where it goes sets my life in motion. I’m constantly finding great wisdom in the most unlikely of places, and with it courage and hope.  And strength.  And direction.  And God.

The world is round, not flat, and there is no edge of anything.

Make sure to sign up for my weekly newsletter.…it’s where I give my weekly rundown. Your info is safe with me…..never shared with anyone else…..promise. I don’t spam. Promise.