Menu
You are here: Home / Christianity / A Christmas Testimony

Tonight was the Christmas Eve service at church. I gave my testimony. I wasn’t nervous…until we pulled into the parking lot.  (Why are so many people here!?  Oh yeah…it’s Christmas Eve.) Then I’m sure you see my heart beating out of my chest. As I was writing it the past few days it started out as the Ghost of Cancer Past post...but then it morphed the more I had time to think about it all…I think it’s a bigger picture of where I am today.

Boo with her Christmas offering:

I’m in love with her dress.  @MatildaJaneClothing

I don’t really remember being up there talking…I think I blocked it out…but everyone said I did it! So many friends showed up in support.  (Thank you Bri for making the long trip with your cute kiddos!)

Here’s the text after the introduction:

My mom is here with us tonight too. She flew in from North Carolina a week ago.  (Mom waves).  My dad is up in heaven. Probably finishing up a golf game. He always said that golf was the only sport he knew of where you get to spend four or five quality hours actually getting to know someone. One of my favorite quotes about dad is from a former opponent:

“Norman could beat your pants off on the golf course, and you’d feel like he just gave you a Christmas present. You couldn’t wait to get back out there and lose to him again so you could just share a great day.”

In May 2011, my dad was flying back from a golf tournament in Korea. He fell asleep like everyone else for the long flight back, the only difference was that he never woke up. His heart had stopped somewhere over Russia and the Artic Ocean. It was a complete shock to everyone. It was like our whole world came crashing down.

I remember flying back to the east coast for the funeral, listening to the familiar hum of the engines and the occasion ding of a bell. Those were the last sounds my dad had probably heard. At first I thought about the cruel irony of it all. He had miraculously survived a plane crash years earlier only to die in his sleep on a plane? When I was little I always imagined that heaven was just past the stars, and weeping I put my hand on the window as if my dad were just on the other side. And when I should have felt broken and shattered from grief, I felt God redirecting my whole soul from despair to hope. For the next few days my family found gifts everywhere, as if my dad had left them on purpose: a devotional he’d left on his desk that read Choose Joy, to-do lists that showed how much he cared about his friends and family, a metal heart he’d carried in his pocket to Korea that read “with god, all things are possible.” These were Christmas presents outside of Christmas.

Shortly after the funeral, I received an email from a photographer containing a photo of my dad standing on a bridge with his hand in the air. I recognized the pose. He was imitating the farewell wave that Arnold Palmer and Jack Nicklaus had done at St. Andrews atop the Swilcan Bridge. The course behind him in the photo, called Nine Bridges, looks like something you might see in heaven. The photographer made a point to tell me that he was certain my dad’s wave was a farewell wave, and that there were actually only eight bridges on the course, the ninth metaphorical bridge was a bridge to heaven. Dad had a huge smile on his face in that photo. It was a Christmas present outside of Christmas.

A few months after my dad died, I was diagnosed with a rare cancer. I went into surgery at Loma Linda and I woke up in ICU looking like Frankenstein and with someone else’s blood. The doctor’s said it was miracle I made it through, a Christmas present well in advance of Christmas.

The first line of chemotherapy was unsuccessful and so a second line was started. I think that’s about the time I just stopped caring what they did to me. It seemed much easier to just surrender. My hair fell out and I was forced to be still with long 8 hour IV drips. The chemo didn’t work but the doctor said he still had some hope for me and started a third line. One morning after that I opened up my Jesus Calling book and the message was: The journey has been too much for you. Do not be ashamed of your exhaustion. Instead, see it as an opportunity for ME to take charge of your life. Remember that I can fit everything into a pattern for good, including the things you wish were different. Start with where you are at this point in time and space, accepting that this is where I intend you to be.

I realized that if this was where God intended me to be then he was not causing my suffering, but he was using it to reach me.

And then suddenly, out of the blue, there was mercy. As I healed, I found myself increasingly unguarded and humbled. Little things became big things. Everyday was like Christmas. I started to find God everywhere. And I think God was like: well, finally, you noticed.

This past August when I was visiting my mother in North Carolina I grabbed a random book off of the guest room nightstand. I pulled it out on the flight back and as I turned one of the pages I saw that a handwritten note that it was the last page my dad had read before he died. It read:
Only with God’s grace can we find true strength, and it comes from acknowledging our weaknesses as we humble ourselves before him. It is a strength that carries us through the toughest times. It is the strength that provides us the power to change our lives.

Sometimes God is not so subtle. The fact that I happened to grab that particular book, and found that note was just another one of those Christmas presents.

Somewhere in the midst of cancer our family had started going to church. I remember one of the first times we came to the 10:30 service. The church was packed and Sienna took off and sat right down here in the front. I thought the back row would have been a much better choice. As we sat down I began flipping through the bulletin and I discovered my name was on the prayer list. I was shocked. This church was praying for me and I didn’t even attend church. (insert sob.) I didn’t even really know anyone. I was truly humbled. The sermon was on Psalm 25. In you Lord, I put my trust. I wrote down in my journal that day that it was the first time I’d ever felt like God was in church. The last hymn was “Surely the presence of the Lord is in this place…” And I was like,

Ok I get it God. I’ll come to church.

Boo has been here longer than Brett and I because she started in the preschool at age 2. Now she’s a 1st grader in the Academy. Brett and I both joined the church earlier this year. A few weeks after I joined the church I found myself thinking: Ok, this is not for me, where is the nearest exit? I don’t know if you are aware but the Presbyterian Church has a lot of committees and specific ways of doing things. I’m more of a free spirit, and an impatient spirit at that. But what I’ve learned is that being a Christian is being accountable to a community. I’ve also learned that God doesn’t always speak to us directly, sometimes he likes to work on us through other people. I must be wearing an enormous “under construction” sign because I feel worked on. I’ve learned how to apologize and I’ve learned forgiveness. I’ve learned more about myself in the last few months than I have in the last 15 years. Now I sit in the front row willingly, because I want to be here.

I attended the Global Leadership Summit here in August and it changed my life. I took 57 pages of notes and used up an entire G2 gel pen. It opened my eyes to the significance of our local church in this big huge world. One of the speakers Oscar Muriu, a pastor from Nairobi, said that it’s not how hard you work as a leader in your lifetime that matters, it’s how many leaders you raise up to continue God’s work. His overall message was:

Invest your life in other people, but not just in your own generation, otherwise your vision will die there.

A generation is 20-40 years. I’m 36 years old. I think that means if you are between 56 and 76 years old, we should be spending more time together.

So why this church? Well initially it was because: 1. We live right across the street and 2. My daughter goes to school here. But now I know that God led us here for a reason, that he’s led all of us here in some way. More often than not I find myself overwhelmed with thankfulness. I don’t want to spend any minute of any day doing things that don’t really matter to God. I want to encourage our pastors and leaders as much as I can. I think it was Bill Hybels that said: You may do something more profitable, but you will never do anything as important as helping build the local church.

I asked Pastor Doug recently why the Presbyterian church has Deacons and he went into a long explanation but the one word I picked up on was “ambassador.” I love that word because it’s what people called my dad: a true ambassador of golf. I told Pastor Doug that I already thought of myself as an ambassador of the church. We should all be ambassadors of the church, welcoming newcomers and building community. A common unity.

We should leave everyone we meet feeling like we just gave them a Christmas present, so they can’t wait to come back. 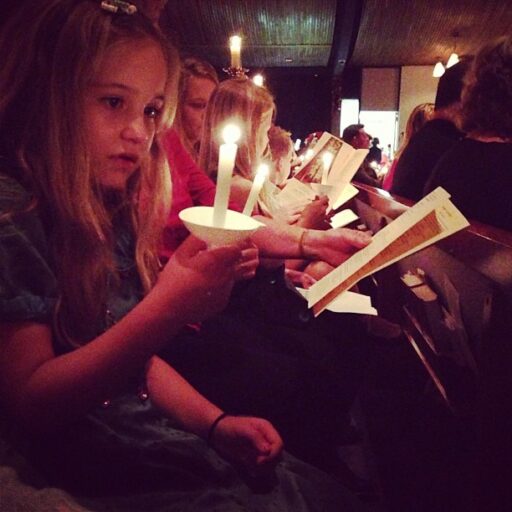 My friend Shivaun and her family came over after church and topped off the evening.  Now it’s time to go to bed before Santa comes.

Merry Christmas to you all!