Menu
You are here: Home / Writing / I said Yes and Every Single Person Said Yes Back to Me

The deep secret in our heart of hearts is that we are writing because we love the world, and why not finally carry that secret out with our bodies into the living rooms and porches, backyards and grocery stores? Let the whole thing flower: the poem and the person writing the poem. And let us always be kind in this world.

-Natalie Goldberg, Writing Down the Bones

My friend Sarah lovingly nudged me to read something I’d written in front of the group at LIAV Camp last week. I didn’t plan on it.  I was actually originally adamantly against it. I was there to just absorb and observe and meet the world halfway.  But she picked up the post-it note that I needed to add my name to the list, and then she delivered it for me.  I decided to pick something from the Cancer Chronicles, to make it a tangible ending.  I’d never read any of it aloud before…it would be the first time I’d verbalized it.  And if it wasn’t for her encouragement I never would have gotten up there to read. I said yes. Thank you Sarah. 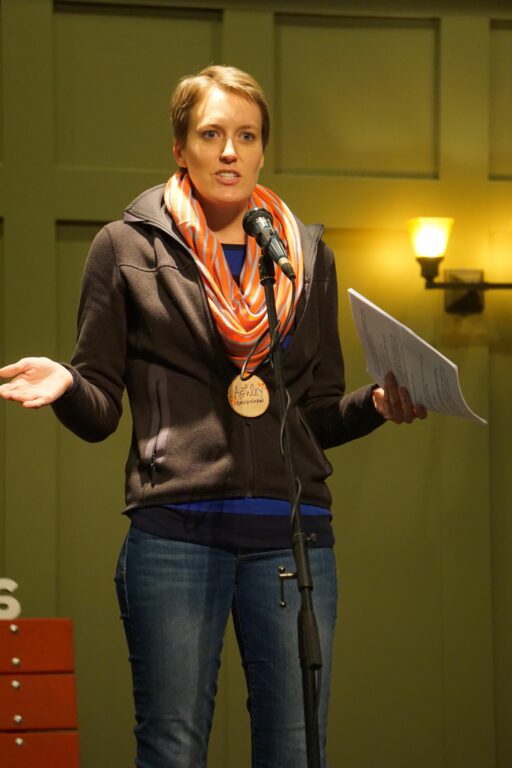 Writing is not therapy, though it many have a therapeutic effect. You don’t discover that you write because of lack of love and then quit, as you might in therapy discover that you eat chocolate as a love substitute and, seeing the reason, stop (if you’re lucky) eating Hershey’s chocolate bars and hot fudge. Writing is deeper than therapy. You write through your pain, and even your suffering must be written out and let go of.

In writing class painful things come up – the death of a husband, throwing the ashes of a dead baby into a river, a woman going blind. The students read the pieces they just wrote and I tell them they can cry if they need to but to remember to continue to read. We pause when they are finished and then go on to the next person, not because we ignore their suffering – we acknowledge it – because writing is the aim. It is an opportunity to take the emotions we have felt many times and give them light, color, and a story. We can transform anger into steaming red tulips and sorrow into an old alley full of squirrels in the half light of November.

-Natalie Goldberg, Writing Down the Bones

The first thing I was handed when I got to camp was a sticker that said “this is a safe place”…and it was.  I barely got through the first paragraph before being unable to talk. And the crowd was clapping and shouting encouragement. And I finished. And it gave my illness light, color and a story.  And then I tore up my paper and let the pieces float gently one by one into the trashcan.

Patti Digh opened camp by saying, “I realize what I do is to create open space for people to show up.” I love that.  I want to create spaces where people can show up too.

That will be my new and forever mission in life.

This is what I read:

I went to pick up my morning coffee this morning and as I stood there a man, much older than me, ordered and then turned in my direction. I knew him but couldn’t place him.

Me: You look so familiar.
Stan: I do?
Me: Oh, I remember. You are Frank’s friend.

He looked at me for a second and then a light went off.

Stan: That was you!
Me: If you mean at Dr. Luke’s office, then yes, that was me. You came to keep Frank company during his chemotherapy but you made me laugh the whole time. The nurses kept kicking you out, but you’d sneak right back in.
Stan: Oh boy, we had fun that day.
Me: Yes, thank you.

And then I asked him how Frank was.

Frank had a rough time. The cancer went from his throat to his lungs and then he just went downhill.

I saved my ugly cry for the car.

I’d met so many people…and most of them didn’t make it. One of those people was Sharon. Our treatment had coincided on a few days. I remember she brought this black and white floral handmade quilt that folded up into itself. I asked her about it, because I like to sew too. She was on heavy steroids and she joked about her chipmunk cheeks. I asked her about her small hometown in the middle of the desert and how on earth she survived without a Target. And then suddenly I never saw her again.

But a few months later an email showed up in my inbox. It read:

I don’t know if you will remember a certain beautiful lady that shared time with you in chemotherapy. Her name is Sharon, and she spends most of her winter months in Blythe. But she remembers you. She was diagnosed with Stage 4 Waldenstroms Non-Hodgkins Lymphoma in January of this year.

I am her niece Kara, and I just wanted to give thanks and love for keeping her spirits up while she was in chemo. […] I don’t know if you know but she was life-flighted from her hometown hospital to her current location in Springfield, where she still is this very day. 5 days of which she was on life support. You are probably wondering why I am contacting you. I wanted you to know that when she was taken off life support, when she was barely able to talk, she spoke to me of YOU. She was very down, and had made the decision to die, was feeling hopeless, tired, frustrated, but we had a rare chance to be alone for awhile, and through a whispered voice she said your name. She wanted me to find out how you were.

I will never know the relationship of your talks or friendship, but I wanted you to know that somehow you made a big impact on her during your visits.

She was concerned about me. And all I did was smile, tell a story, crack a joke or two. I didn’t do anything more or less.

And that’s what Stan did. He smiled, told a story, cracked a joke or two. He didn’t do anything more or less. But he made my day more bearable, and he didn’t even know me.

I sent Sharon messages here and there. And I never heard back. I grieved for her.

And then, a few months later, just when I was moving on, a message:

I’m home… after 92 days in the hospital, feeling much better and learning how to walk again. I can’t tell you how much I appreciated your messages – each time I saw you at our treatments you managed to pick up the entire room. So glad to see your doing well–God bless and just like you I CHOOSE JOY TOO!! Love, Sharon

I wrote her back but I’ll never know if she got my message.

But, in darkness there is a light. Cancer has a weakness: a yes. A grateful yes.

That I said yes to Sharon.

That I said yes to Frank.

That I said yes to the cranky man with sunglasses who borrowed my blanket because he was cold.

That I said yes to the young girl who was scared just like me.

That I said yes to the man who yelled expletives like “f*ckin balls” and “sh*t sh*t sh*t” in his sleep.

That I said yes to the man whose wife safety pinned notes to his shirt for the doctor.

That I said yes to the woman who refused to let the hairdresser cut off the last patch of hair she had left.

That I said yes to the elderly woman who teared up when she talked about her daughter.

That I said yes to the man who used to sell encyclopedias door to door in his younger years.

That I said yes to the elderly woman who announced she was wearing a diaper to the entire infusion center.

That I said yes to the man with lung cancer and his friend Scott who asked for my autograph. I was famous for a day.

That I said yes to Mr. White who once won the lottery, but had already lost 2 wives to cancer. His last wife had created a cookbook for his next wife, so she’d know what all his favorite dishes.

That I said yes to the woman with pancreatic cancer who said she was worried about her husband, because she knew she was going to die.

That I said yes to the woman who said she wanted to throw up every time she had to step foot in an oncology office.

That I said yes to the man who wished he could send a ham sub through his stomach tube.

That I said yes to the young man who had testicular cancer for the second time.

That I said yes to the woman who could knit in her sleep.

That I said yes, yes and yes.

And that every single person said yes back to me.

Because I could have said no.

These patients, their families and friends, and their yesses are the most precious gifts.

Because their yes’s woke something inside of me.

Now I say yes to experience.
Even the bad, boring and bitter.
I breathe in the hurt. I swallow the pain.
I say yes to darkness, because it makes the light so much brighter.
I say yes to people. I see them. I see you. I see you.
I open my heart to life,
Without reservations.
I am present.
Life is short but wide.
I will show up alive.
I say yes to love, and I love hard.
I know this will prove to be enough.