Menu
You are here: Home / Archives for Writing

Two years ago I found this amazing metal globe at a thrift store and I thought our magnetic poetry set would be a fun addition to it. Sienna and her friends can’t resist moving the words around. I love the little messages they leave me…often very profound: 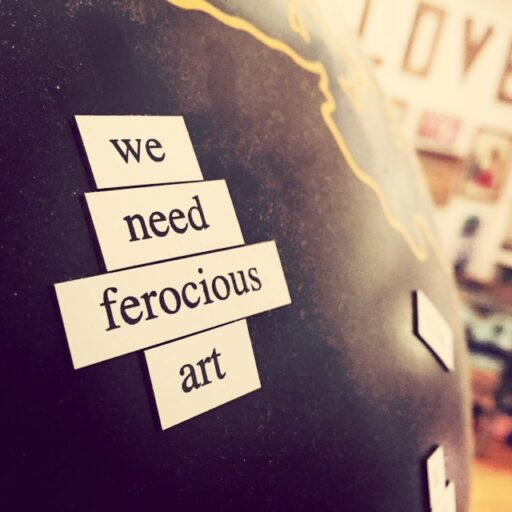 It’s also a great way to overcome writer’s block which is how Magnetic Poetry came about in the first place by it’s inventor Dave Kapell: 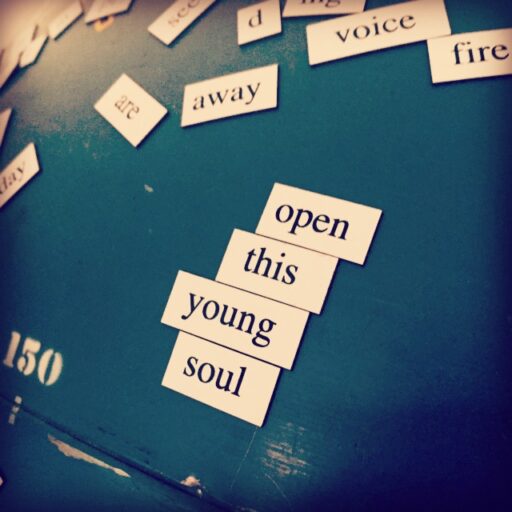 This one needs an “e” added but still beautiful: 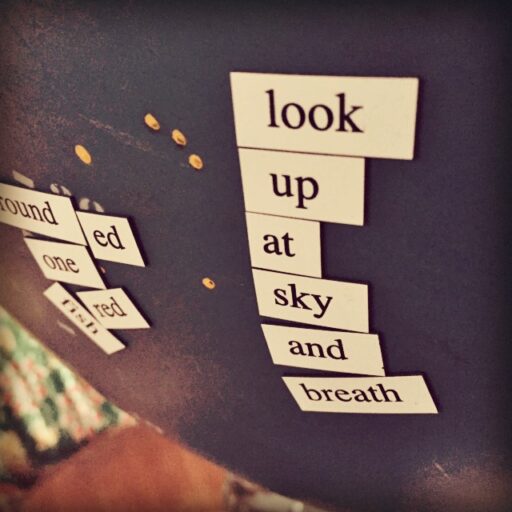 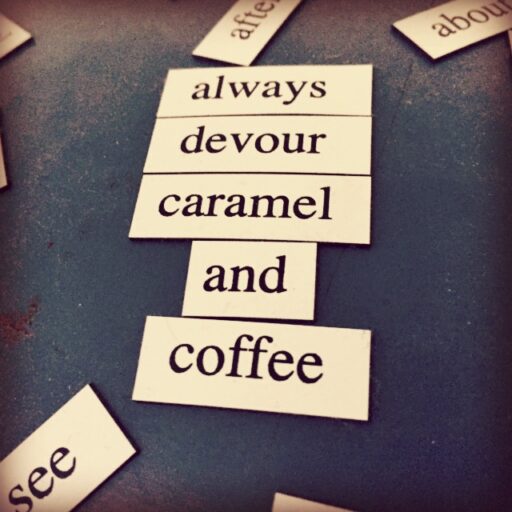 The marble one I’ve shared before (in a post about vintage decor) but it’s changed a little, they often shift over time: 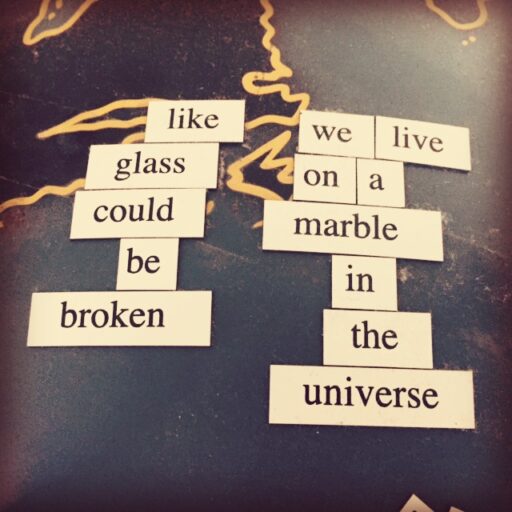 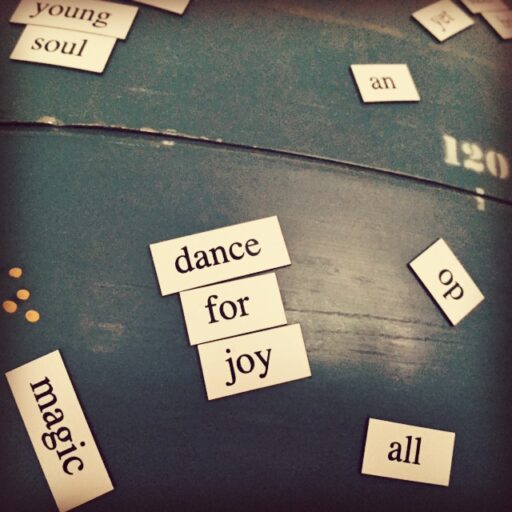 You can still get the original Magnetic Poetry kit which has 300 tiles: 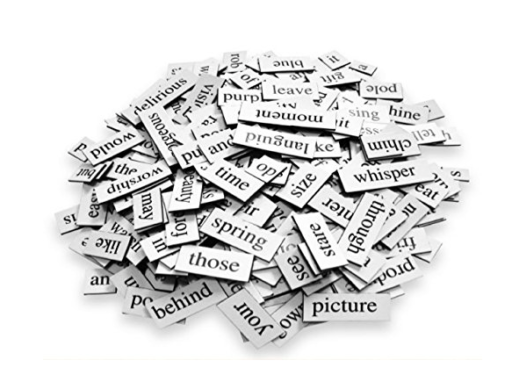 And since 1993 there have been tons of other releases of other sets too including: Edgar Allen Poe, Shakespeare and Super Hero among others.

Do you have them on your fridge right now? What do yours say right now?

(You can see more of the House on Hospital Hill stuff here.)

I could tell you the story of The Butterfly Circus but you should just watch the short film:

I spent the last week at a writing intensive led by author Patti Digh and one of the recurring themes that I came away with was the one line from The Butterfly Circus: I think you’ll manage.  I have been finding quite a few ways not to manage lately.

The other message I heard in the film: Don’t let the world lie to you. Don’t believe the standards the world measures you against. Don’t let it tell you that you are broken or incapable. The world has no idea what you are capable of.

I love the part when Mendez says:

Yes, you do have an advantage. The greater the struggle, the more glorious the triumph.

I learned a lot about myself last week and felt like I was getting back on track again after having derailed for a while. When it was time to go home I felt a twinge of fear because I realized I was re-entering real life again: my real life with a husband and daughter that I want to love and give undivided attention to, my real life filled with endless to-do lists and responsibilities, my real life filled with distractions and competing interests. I can find a million things to move me away from my work instead of towards it: I don’t have time. It’s too loud in here. I’m not smart enough. I’ve lost brain function. I’ll never finish. The dog is needy. Maybe that’s why I’ve always had this idea of finding myself in Annie Dillard’s Tinker Creek cabin and writing my own book, because I could write like Annie if I just lived in a that cabin, in solitude, right?

One morning we were writing about leaving a coat behind, the coat being a symbol of something heavy we have been holding on to. I ended up writing a story about Tinker Creek. And it was one of those stories that came out of nowhere, as if I was not even aware of the words while I was writing:

She stepped into the cabin and realized it was smaller than she had thought it would be. There was small rickety writing table and a simple cane chair in the room but not much else. The quiet was like a vacuum. The solitude in this natural environment had been long awaited. This is where her muse resided and where she would finally finish her work. The lengths to get here, away from the distractions of the world, had spanned a few months. She sat down in the simple cane chair and carefully unpacked her writing materials: her typewriter, her notebook, her pens. And as she sat in the chair, she waited for the inspiration. But the inspiration did not come.  She walked down to the creek, and stood on the large rocks and twisted roots that she knew Annie had once stood on. And as she stood on the rocks, she waited for the inspiration. But the inspiration did not come. She walked through the woods and looked for the frogs and the squirrels that Annie had written about because surely those would spark the inspiration. And as she walked, she waited for the spark of inspiration. But the spark of inspiration did not come. She walked back to the cabin, stepped inside and took off her heavy coat. As she went to hang the coat on the back of the door she discovered a coat hanging there already: Annie’s coat.  She turned, looked around the cabin and suddenly felt unwelcome. This was not her writing space. This was the writing space of someone else. She realized that her inspiration had been left in the beautiful chaos of her own life. The muse she sought was in all of the questions she was trying to leave behind.  And in the questions there awaited a huge roaring reservoir of a river, not just a tiny tinker of a creek.

Reading back over what I wrote, the words became a very clear message: I am not Annie. I compare myself too often, I set expectations of myself based on other writers. For example I’m fairly certain that my use of punctuation is wrong…compared to Annie Dillard, or anyone that passed English 101. I have my own language and way of writing that comes from my own experience. It cannot come from anyone else but me. For a long time now I have been struggling to connect two very different bodies of writing I have been working on and it feels like I have been trying to construct a bridge from California to Japan. And at times it seems too hard to be done. But then this happened:

Me: It would be a really long bridge spanning a few tectonic plates.

Patti:  I don’t think many people would want to drive over that bridge.

With that one sentence the universe was cracked open for me. I was trying to force things together that maybe aren’t supposed to go together. And when I force things I venture outside of my own voice and the writing just becomes a scary-tectonic-plate-spanning-bridge. And I don’t think anyone would want to go on that bridge either, including me.

There’s more than one way across a huge body of water and maybe I should be taking a slow scenic boat instead of trying to build a super technical ocean highway. All the obstacles and boundaries are my story. Even the ones I create out of thin air.

One day as a break from writing we spent an afternoon creating little writing shrines from Altoid boxes and sometimes my brain makes things without asking and mine ended up as this Jesus reminding me to write while a ship gets eaten by a sea monster: 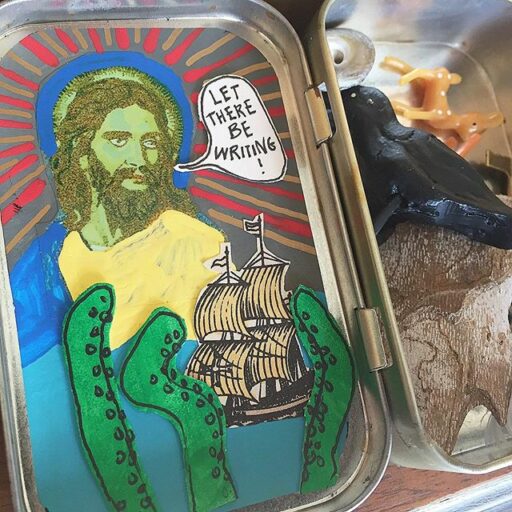 I can find find meaning in just about anything so I think I was was maybe subconsciously trying to tell myself: Write! To save the people on the ship from the writhing pickles!

Somehow I think butterfly circuses, pickled sea monsters and Annie Dillard are all connected in some way. I’m not going to try to explain it any further but what I wanted to leave you with is that: I think I’ll manage. And I think you’ll manage too.

I recently saw this typewriter in a local antique shop: A model 7 Blickensderfer Typewriter c. 1897.

Designed by George Canfield Blickensderfer, it was known for its portability and advertising included reviews such as “well adapted to small quarters” and “I took your Blickensderfer to Omdurman [Egypt] and have done the whole of my work for Reuter on it….never has a typewriter been tried more severely.” See the little cylinder? Pressing a key caused the embossed cylindrical wheel to turn so the correct letter was positioned over the paper, it would then be inked by a roller as it was pressed down onto the paper. This is one of the first portable typewriters and weighed only about 6 pounds. Cool right?

I recently got all new juicy inky ribbons for my own collection of typewriters. I loaded them all in today and it felt kind like I’d won some kind of lottery being able to choose from any of them and type for a very long time: 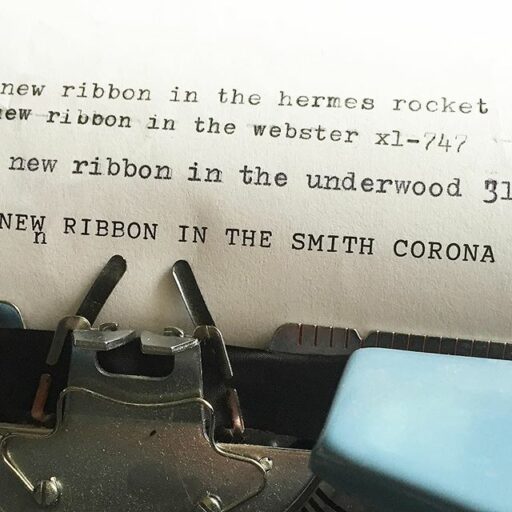 And then a thoughtful gift left by a new friend today. I met author Kim Michele Richardson a few weeks ago when she popped in to the used book store I volunteer in. This week I went to her local book signing and she’s been so supportive of my own dreams to write. She left me these old typewriter keys today and some other bits of an old Smith Corona typewriter. I’m pretty sure they came from an L.C. Smith #8 which were manufactured around 1915. 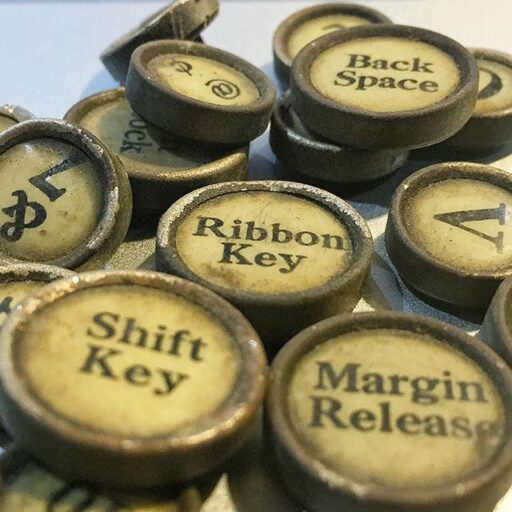 Somehow she must have known that I’ve been writing on this newer electric Smith Corona: 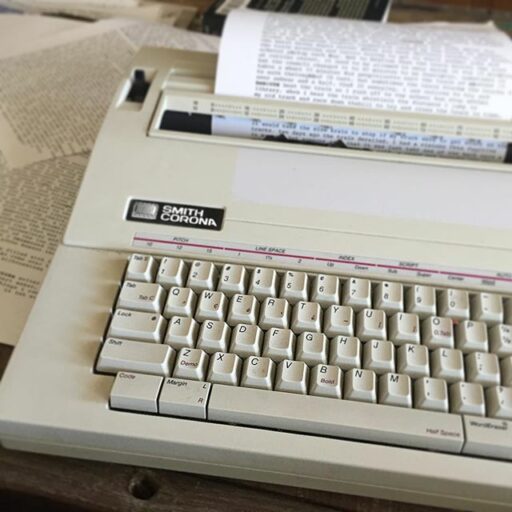 I love writing on the electric typewriter that a friend of ours gave Boo a few years ago. When Boo first had a chance to test it out she said: this is the best thing invented since the computer.

It’s a good feeling trying to fill up the pages with the clicking of the keys, no spell check and no way to backspace. I can’t rethink…I just move forward. My favorite thing is when I type too fast and after I’ve stopped the key have to catch up with me: ghost typing.  One thing I’ve learned: I could definitely stand to improve my typing skills…and spelling skills. I’ve become too reliant on spellcheck these days. I’ll have to write about these two typewriters in my morning pages this week…a thread connecting two machines that were manufactured 100 years apart. I’m certain the old keys will tell me stories of all they captured over the years.