Menu
You are here: Home / Uncategorized / The Vultures

Just like a dream experience, whatever things I enjoy will become a memory. Whatever is past will not be seen again. -the Dalai Lama in Kundun

A few days ago I was walking Max up the street and noticed eight large vultures above us in the trees.  Vultures don’t make any noise, they don’t have a voicebox, so you’d never notice them unless you looked up.  I snatched Max up into my arms, thinking they might be eagles or hawks at first.  Each must have been over 2.5 feet tall.  Huge.  But then I noticed the way that they were sitting, kind of hunched down, and that their heads were bare. Vultures. But these huge birds weren’t a threat, they were just probably hoping I’d keep walking and never look up.

One by one they slowly stood up and in their awkward, bumbling manner spread their large wings out and took off.  I was so taken by them that I ended up in someone’s side yard trying to get a closer look. Although at first glance they might seem menacing, they are actually very gentle creatures. I’d never seen them up close before and I loved their whole demeanor. 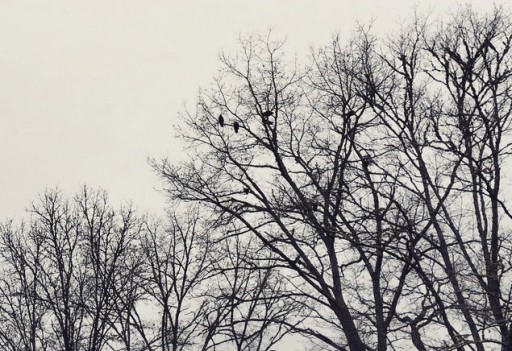 I kept walking and saw two more closer to our house, one right above me again, just staring down from a tree just off the side of the road. He kind of reminded me of the umbrella vulture in Alice in Wonderland only he wasn’t glaring.

I love animal symbolism, and studying the spirits of animals. Like when a vulture crosses my path…how could that be anything but good? They never kill or hurt their own kind, and they clean up death from the landscape, they do the job that no one else wants to do.  They are nature’s disease control. How great to know one’s purpose so clearly! And the Cherokees call them the Peace Eagles.

I re-watched the movie Kundun a while back and was reminded of the sky burial that Tibetan Buddhists use at death. The vultures  scavenge the remains of the dead, giving them second life.  There’s a powerful part in the book Last American Man where Eustace Conway’s horse Hobo breaks his leg and he shoots him and leaves the body for a year:

He left Hobo where he’d fallen. He wanted the vultures to eat him. He knew that the Native Americans believed vultures to be the sacred transport, the means by which a spirit is delivered from the earth up into the sky. So Eustace left Hobo there, where the birds could find him. Which means that, even today, whenever Eustace is working outside and sees vultures drifting in the air, he looks up and says hello, because he knows that’s where Hobo lives now.
–The Last American Man, Elizabeth Gilbert

(amazing book btw, I read it straight through and didn’t sleep for a night)

A year later Eustace went back for the vulture feathers, to collect them and to put them somewhere sacred.

Every time I see a vulture drifting in the air I say hello too. And thanks.

And as Whitman put it: What stranger miracles are there?