Menu
You are here: Home / Sixty One Park / How Old is the Farmhouse

We thought that the farmhouse was built around 1945, at least that’s when the tax records first have a record of there being a structure on the property. Throughout the demolition it’s become apparent that the house is much older than 1945.

Mr. Plott, the man we talked to who grew up in the house, told us right off the bat that they had moved into the house in 1942 and they weren’t the first ones to live there.  So we knew it was at least standing in 1942.

This is a photo of the farmhouse taken in Nov 1937 when the chimney was still being used. (Found via a larger photo (which you can view here) Copyright Western Carolina University Hunter Library R.A. Romanes Collection) 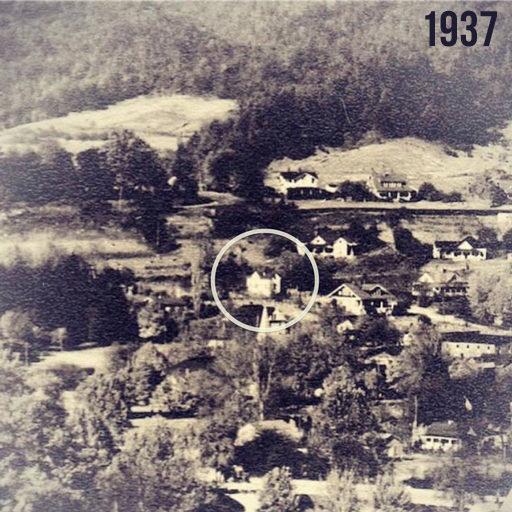 This handwriting was found on the back of a few boards upstairs. The wood reads “Vasel Williams Bryson, NC” labeling the shipment for the train ride. This was misspelled though because the name was actually Vascal Williams. I have a copy of the old property deed. Vascal was married to Grace Williams and I haven’t been able to find much information on them. We do know that the Williams family moved into the house in 1917 and must have done improvements to the upstairs at some point. All of the nails in these boards are different and much newer than the rest of the structure.

I found another photo in the WCU Hunter Library archives, taken in 1920 by Horace Kephart. I enlarged it and overlaid it on the later photos I have and the roof lines and mountain ridges line up perfectly. (view original photo here) Our farmhouse is there but one of the houses on the hill above it hasn’t been built yet and that particular house was built in 1910. That means the farmhouse is at least 52 years older than we thought. I’m still determined to narrow down an exact date to the house but now I know it’s at least 107 years old. 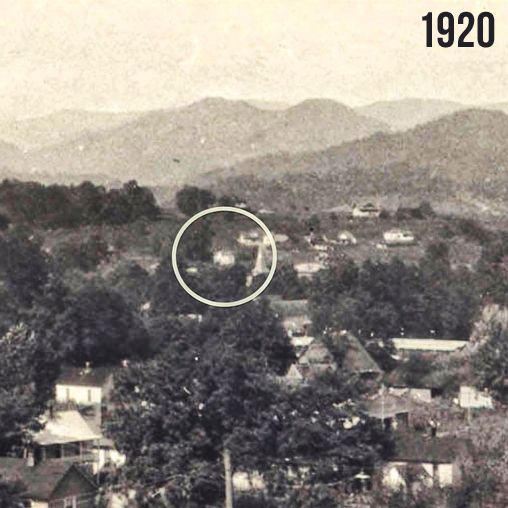 The farmhouse was built using balloon framing which means the long walls coming all the way up from the first floor to the middle of the second floor. There are also some elements of post and beam framing as well which came before balloon framing. The interesting thing is that so much of the wood doesn’t match...as if it was taken from a variety of other projects…some of the roofing and flooring pieces are painted odd colors as if they were reclaimed. Many pieces look like they were cut right on the property…with tree bark still left on them, some even cut by hatchet or hand saw. The roof was redone at some point using chestnut which is also used to date houses around here. The chestnut blight in the early 1900s killed off about 4 billion trees in just a few decades and up until then most barns and houses east of the Mississippi were built of chestnut, especially those in Appalachia. 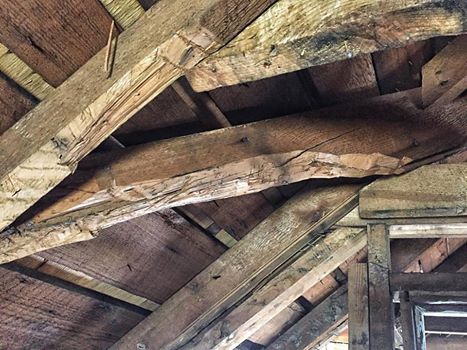 This is a basic diagram I found for balloon framing (and a great write-up about the history of framing): 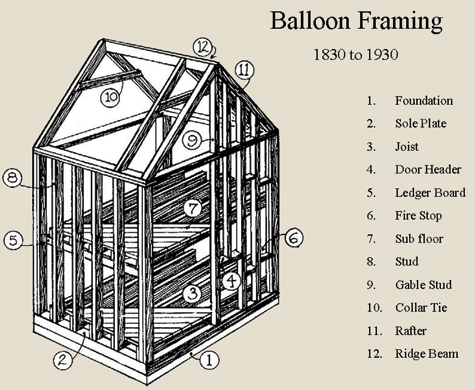 The family that lived in the house before 1917 were L.J. and Sue Moody.  I’m still researching them. I did find an old script token with Mr. Moody’s name on it so maybe he was a store owner in town because I found this explanation:

Ingle System tokens were issued between 1909 and 1919, personalized for hundreds of businesses. The Ingle System is a method of bookkeeping which allows merchants to treat customers’ credit purchases the same as cash transactions. Prior to this system, businesses required credit ledgers listing each item and its price for credit purchases. Ingle provided an alternative system to this time consuming bookkeeping process, where a certain amount of credit was extended by providing the debtor with tokens in the amount of credit extended. The tokens could be spent the same as cash with the issuing merchant. The merchant’s ledgers now only had to include an amount rather than a long list of items and prices. It is estimated that 75% of all Ingle System tokens were used by general stores, grocers and meat markets. -from Ohio Metal Detecting 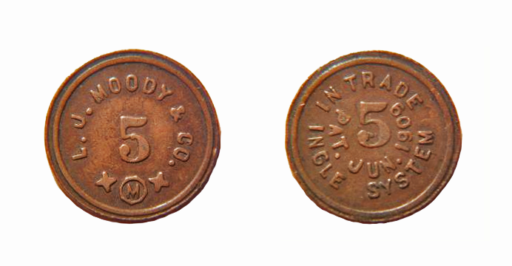 Kind of cool. And I’m still trying to find out more though, and narrow down the exact date of the farmhouse. You can read more here about the Sixty-One Park farmhouse we are restoring with our friends!