Menu
You are here: Home / Wedding / The Wedding…..

Did you watch the royal wedding today? I was up early…..it’s the first thing I thought about when I woke up this morning. I think I might have had more anxiety than the bride and groom….I wanted everything to just be perfect for them!

I thought her dress was just perfect…..you know I am a huge Alexander McQueen fan. (Remember Boo’s inspired outfit? her headpiece looks just like some of those hats worn today)

Some cool facts about the dress via Daily Mail:
:: The lacework for the dress was carried out at the studios at the Royal School of Needlework at Hampton Court Palace. The embroiderers were not told which bride would be receiving their painstaking work.
:: The lace applique, which featured the four floral emblems of the UK – rose, thistle, daffodil and shamrock – was made using the Carrickmacross lace-making technique, which originated in Ireland in the 1820s.
:: The process is so time-consuming that it takes even experienced stitchers about an hour to sew an inch.
:: Each motif, some as small as a five-pence piece, was then crafted with minute stitches every two to three millimetres.
:: The workforce, estimated to be at least 12 strong, included students from Britain, Japan, China, the U.S., Thailand and Germany — aged between 19 and 70.
:: All were required to wash their hands every 30 minutes to keep the lace and threads pristine, and to renew needles every three hours to maintain optimum sharpness.
:: The dress was stitched in separate sections and put together only at the last possible moment, within the confines of Buckingham Palace where a special workroom was set up.

My family (and many others) think my younger brother Swen  looks JUST like Prince William….can you see a resemblance? I have to do a double take when I see a photo of Prince William on a magazine stand. 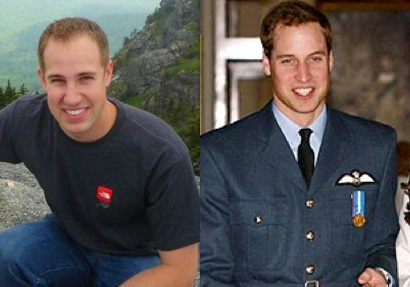