Um, is today National Be Nice to Ashley Day? It’s not? Hmmm…..that’s weird…..it felt like it.

Remember when I left my phone on the top of my car? When I got it back I swore I would never leave anything anywhere again. Well, that was short lived…..

Today I was trying on some things at Old Navy. When I went to pay, I reached into my purse…..and my wallet was….. gone.  Panic. When could someone have taken it? I never let my purse out of my sight for even a second.  I looked around to see if there were any suspicious characters.  The toddler in the stroller behind me looked pretty shady…..but not like grand theft shady.   The cashier, Tonya, was just as upset as I was.  I wasn’t so worried about having my wallet stolen (because I am prepared, remember?)….but in my wallet was my ID (which I need to get on a plane tomorrow) and prescriptions (which I needed filled before getting on the plane). I asked Tonya to hold my stuff (I just met Tonya but I think I can call her my new BFF)….and I jumped in my car to drive back over to Target where I’d been 45 minutes before. Guess what…..I’d left my wallet in a cart…..in the parking lot…..and someone returned it. AND-THANK-YOU-nice-person-in-the-Target-parking-lot-who-didn’t-even-take-my-fully-filled-McCafe-Rewards-Card! When I got back to Old Navy, Tonya was so happy and said she’d been praying since the second I left…..it worked: 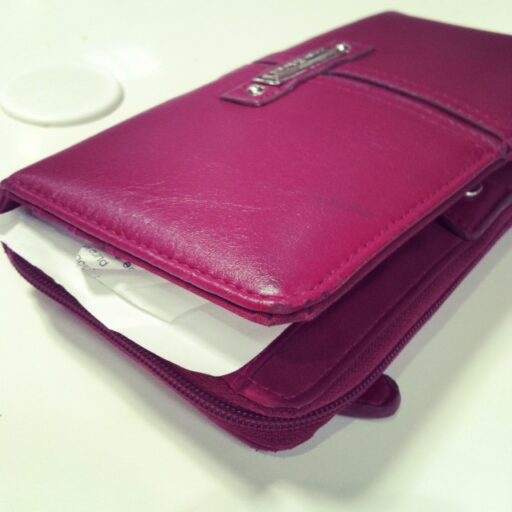 After Old Navy, I went to Costco to fill my prescriptions and…..right when I got there…… the pharmacist had just taken off his jacket and was going to lunch.  Just my luck. But….when he saw me, he stopped…..walked back over…..asked me how I was doing….and commented on my hair. He’s bald. We were twins for a while. Then he took my prescription and said he’d take care of it right away.  His name’s Andrew……and he’s awesome. We’re BFFs.

After all that, I got in line for a slice of pizza. As soon as it was my turn to pay I realized I didn’t have any cash. So I started counting out pennies and nickles and checking every pocket in my purse for change.  An older man behind me stepped over and said “Do you need some money, sweetie?” Omg…..he thinks I’m homeless…..but wearing Lululemon. I turned down his offer. I had to return my drink (for a water cup)….but I paid for my pizza with 4 cents to spare. Now I wish I’d told him he was my BFF…… 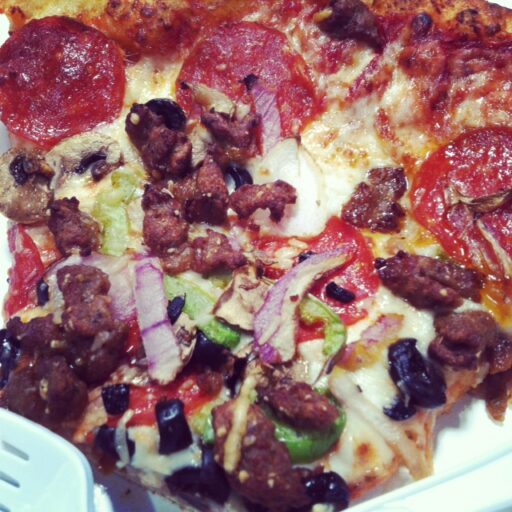 But then he seemed a little annoyed when I held up the straw line to take a photo ……and then had to retake the photo a second time. Don’t worry mister, you don’t want those straws anyways…. 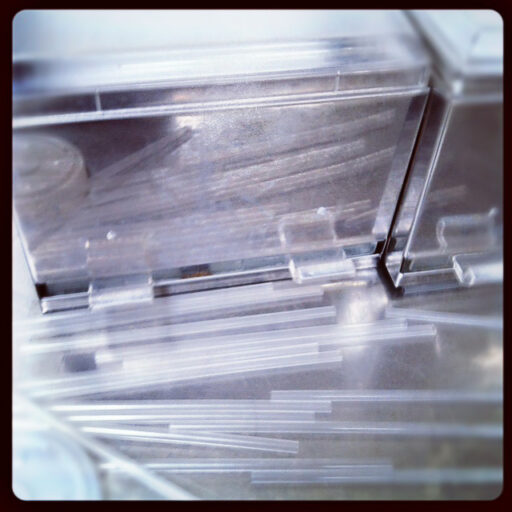 As for the straw photo…..how else will I further my campaign for un-germy straws at Costco? 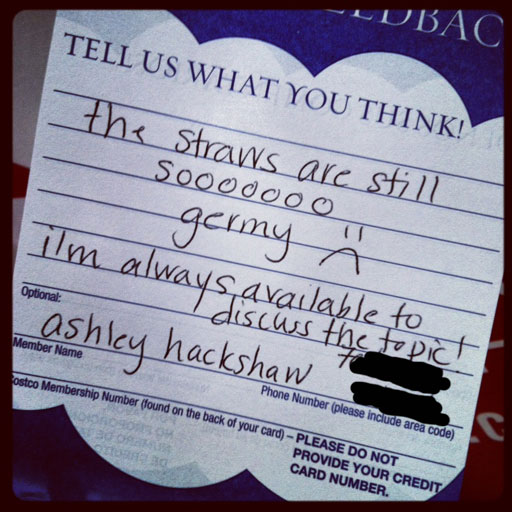 They never end up calling me……

I need a name for this campaign. Something I can hashtag…..any ideas?

Update: I think Mr. LBB found the perfect solution. Dear Costco, simply place your hand under the dispenser and a “sterile” straw will drop into your hand. By my calculations, for 605 worldwide locations, this will cost you about $75,000…..and then I’ll stop leaving comments in the suggestion box! Based on your June sales, it would only take you 21 seconds to make enough revenue. You could buy 4 for each store in the time it took me to do that math.