Menu
You are here: Home / Life / Sophistication Follows Me Nowhere

I was in San Francisco Thursday and Friday…..but less than 24 hours. I had planned on it being a super sophisticated trip since I was all by myself and staying in the Clift hotel…..but apparently sophistication follows me nowhere.

Palm Springs is a really small airport. There were only a handful of people in the security line. Piece of cake. I knew I had nothing metal on me…..but as I went through the round full body scanner I was stopped. The woman said the machine had flagged my hair as unusual.  I told her they WAY overpaid for that new machine.  Then she launched into a lengthy lecture about the algorithms of the machine and why my hair would be deemed as unusual and maybe I could hide a weapon in it and it wasn’t anything against my hair…..blah blah blah.  Huh?  And then she confiscated my toothpaste.  That made my blood boil……because she let me keep my huge container of contact lens solution…..so it didn’t seem fair to the toothpaste.  But mostly my blood was boiling because I’d just read an article on the rampant theft in airports by TSA and I felt like this was toothpaste robbery in a way.  And I was also thinking about the government intervention into school lunches and it was all too much and I was starting to feel like Aaron Stampler in Primal Fear.  I asked her if she was going to throw away my brand new tube of toothpaste and she said yes.  I told her how I felt about the wasteful nature of the toothpaste confiscation. I asked how many tubes of toothpaste she confiscates on a daily basis.  A lot. She said the homeless go through the trash anyways.  Fantastic…..the homeless will eventually get my toothpaste…..after it’s made the rounds in dumpster sludge.

And you would think this was the end of the story…..but it’s not….

Then, the woman behind me, went through security.  It was her first time on a plane……so I guess she really didn’t know what she was allowed to take.  They opened her carry on bag and declared they would have to:

“CONFISCATE THE BOTTLE OF DOUCHE.“

I’m not kidding. I almost died….for her.  Thankfully, she didn’t seem too phased….apparently her feminine douche only cost a dollar.  That’s about $3 less than my toothpaste.  As she and her guy (boyfriend? husband?) made their way to the gate, in a moment of insanity, I told her: sorry about your douche. And then I thought to myself: maybe I shouldn’t be allowed to interact with the public. And then I thought about how the homeless digging through the dumpster would be ecstatic to find an unused douche.  And then I threw up in my mouth a little thinking about the douche and the toothpaste sharing a dumpster. But the point of the story is that we bonded over douche and we were all instantly BFF until we parted ways in San Francisco.

I met my college friend Laura as soon as I landed in San Francisco. We went to grab a bite to eat and she surprised me by having another friend, Ginger, meet us. I seriously hadn’t seen her in 10 years I think?  Of course the first story I had to tell was the douche story.  It’s like I have douche tourettes. And then we all caught up on the past few years.

I walked back to the Clift Hotel to change for the event I was hosting at Macy’s Union Square. I had a panic attack on my way to my room thinking I was in the Shining. The hotel is super dark…..so their electricity bills are probably super reasonable. I took a photo….just so I could check and see if any paranormal orbs showed up. I think there a small wispy one under the light. Oh….maybe it IS a wisp….like in Brave.  Good thing they didn’t lead me up that creepy staircase. Bah humbug….everyone knows wisps are just bog methane. Anyway, you be the judge: 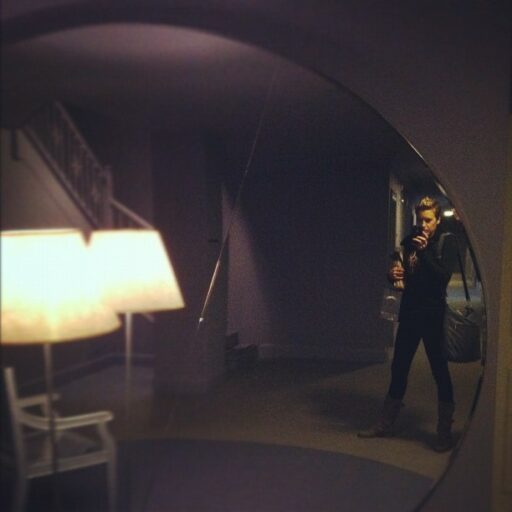 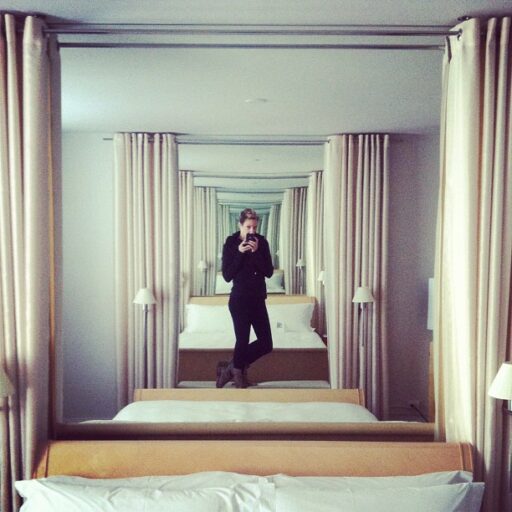 Later, I walked to the event at Macy’s….but before I got there I was handed a few flyers on the street promoting it.  I was actually ON the flyer…..which makes it even more awesome……but I pretended each person was the first to tell me about it: oh, cool, sounds fun, thanks for the invite! I’ll check it out! Macy’s had a “green room” set up for me which was so nice but totally not necessary. I spent the entire time texting friends to see if they were early so they’d come hang out with me and eat the food……but part of the time I eavesdropped on the snooty lady who was rudely bossing the Macy’s personal shopping staff around….biting my tongue but really wanting to go all ninja on her. 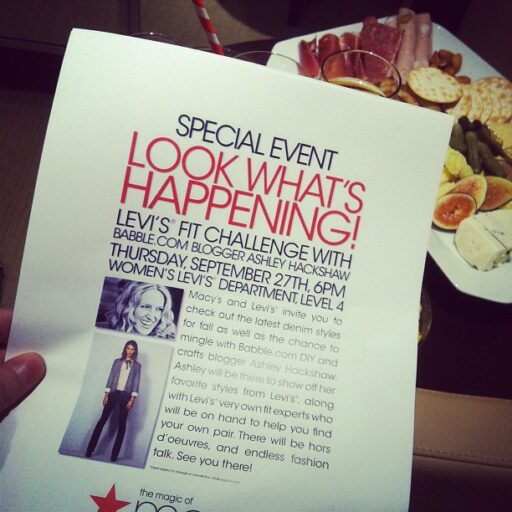 The event was fun and I met a lot of rad people. I felt like a rockstar…..when….. a group of Japanese tourists wanted to take their picture with me….even though they had no clue who I was.  Maybe they thought I was the tallest woman in the world….I WAS wearing 4″ heels. The highlight was the little tiny grilled cheese appetizers. All I could think was What is this? A grilled cheese for Ants?*

*that’s a Zoolander reference for the deprived who haven’t seen the movie…..in the past 11 years.

After the event I walked back to the Clift again. On the way I tripped over a little dog with a rainbow mohawk.  For real.  Oh, and I followed a married couple into a random art gallery because the woman was raving to her husband about it.  So I was all “ohh….I wanna see too you guys!”  And I finally got back to the Clift. Then my friend Ginger came over. It was the first time I would meet her husband Kurt: Hi, nice to meet you….would you mind taking a photo of me in the gigantor chair? 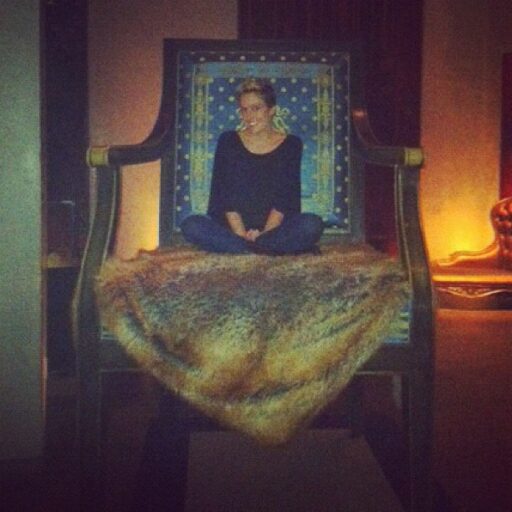 Apparently the Clift Hotel Redwood Room is the place to be on Thursday nights. We started out with some food and drinks and then the next thing we knew….the place was packed and there was a DJ. I was sure I was going to bump into Drake….but the “cowboy” wearing fringe hot pants from the party next door was so much better. Insert another round of drinks, random stranger interactions, and me trying to impress Ginger’s husband Kurt by naming every member of the Wutang Clan. I ran into an old friend from MBA school and we discussed the best way to drink Franzia.  (What up Randy!)  I stayed up way too late and only slept about 4 hours before I had to get up and catch a cab to the airport: 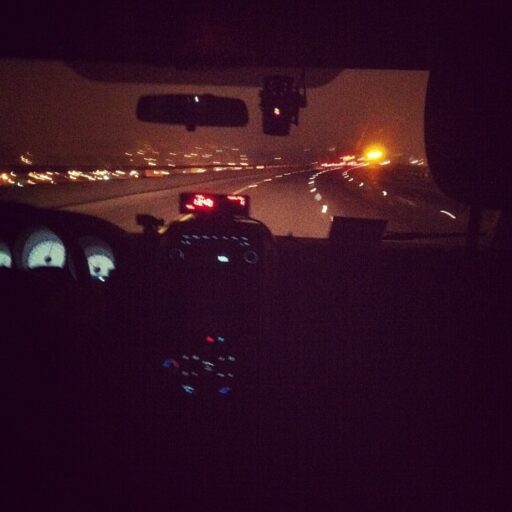 On my flight back I decided I was going to avoid radiation and opt out of the full body scanner. I waited in the long queue for about 20 minutes. Then I waited in line for my 10 minute pat down…..thoroughly enjoying the absurdly technical explanations of every single “pat down” step.  It was comedy gold.  As soon as I got through security I looked for my gate number….and…..it didn’t exist. #$#$^$%^ I had gone through the WRONG security check.  So then I had to book it over to the correct security line…… which apparently you’re supposed to take a shuttle to….but I wasn’t paying attention because I think I was slightly hungover. When I finally got to the correct line I had the TSA guy double check my ticket twice. Then he drew two little flying birds on my boarding pass with his red pen…..which he explained were actually his initials MM because I asked: what do the seagulls mean?!?!? thinking it could be code for terrorist watch list.  Then I walked up to the conveyor belt with my stuff and I stood there wavering: radiation…. pat down…. radiation…… pat down…..  Oh eff it….full body scanner here I come.

…..and that time it didn’t think my hair was so unusual.