Menu
You are here: Home / Minimalist Living / Craving a World of Less Convenience

Before my grandfather died I had a chance to interview him here and there. I would go over to his house and ask him questions about his childhood and growing up….the kind of stuff that no one else would know. I would ask him to sketch little maps of house and land and as he did that the stories would begin spilling out:

That’s where the well was. We lowered our milk and cheese down into it using a bucket to keep it cool.

The barn had a pool table in it. This is the window I once sent a pool ball crashing through.

This is where the wood-fired stove was that your great-grandmother cooked our meals on.

When we drove cross country this summer to our new home we made a detour up to Kansas to where my grandfather’s grandparents had homesteaded in the 1800’s. I had an old map and he had pinpointed the location of the farmhouse he grew up in.

The old farm was right here. We didn’t have any electricity.

When we got to Lindsborgh in early June, we ate lunch and then I showed to my grandfather’s map to a few locals to see if they could decipher where the location of the farmhouse was. Two women stared and chatted and then you could see a lightbulb go off: they knew exactly where it was….and it was still there.

Excited, we jumped in the truck and we drove from the town into the rural country.  We drove down skinny paved roads with wheat fields for as far as the eye could see. Then we turned onto a gravel road.  And then a dirt road.  Then another dirt road.  And finally we found it. I recognized it from the photos I had. 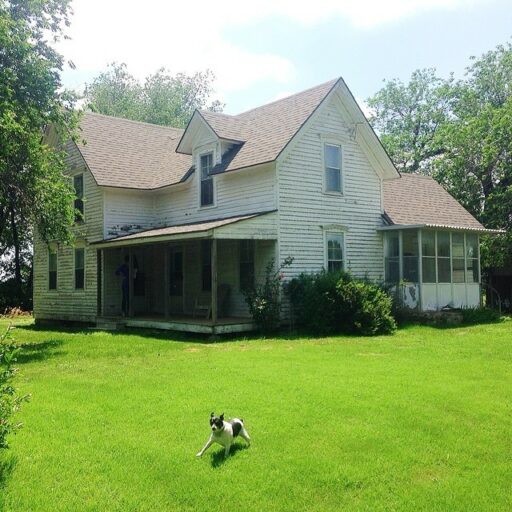 When we arrived at the farmhouse I think what hit us most was the remoteness of it.

What on earth did they do out here?
Where did they buy things?
Who did they talk to?

And the answer was so simple:

They worked all day.
They rarely bought things.
They talked to each other.
They shared with neighbors.
They went to church.
They were pretty darn self sufficient.
This was the American Dream.
And they were happy.

I recently read The Last American Man and it’s was one of those books that I stayed up all night reading because it really hit me how profound it was:

Do people live in circles today? No. They live in boxes. They wake up every morning in a box of their bedrooms because a box next to them started making beeping noises to tell them it was time to get up. They eat their breakfast out of a box and then they throw that box away into another box. Then they leave the box where they live and get into another box with wheels and drive to work, which is just another big box broken into little cubicle boxes where a bunch of people spend their days sitting and staring at the computer boxes in front of them. When the day is over, everyone gets into the box with wheels again and goes home to the house boxes and spends the evening staring at the television boxes for entertainment. They get their music from a box, they get their food from a box, they keep their clothing in a box, they live their lives in a box. Break out of the box! This not the way humanity lived for thousands of years.

Clever, ambitious, and always in search of greater efficiency, we Americans have, in two short centuries, created a world of push button, round the clock comfort for ourselves. The basic needs of humanity – food, clothing, shelter, entertainment, transportation, and even sexual pleasure – no longer need to be personally laboured for or ritualised or even understood. All these things are available to us now for mere cash. Or credit. Which means that nobody needs to know how to do anything any more, except the one narrow skill that will earn enough money to pay for the conveniences and services of modern living.

But in replacing every challenge with a short cut we seem to have lost something and Eustace isn’t the only person feeling that loss. We are an increasingly depressed and anxious people – and not for nothing. Arguably, all these modern conveniences have been adopted to save us time. But time for what? Having created a system that tends to our every need without causing us undue exertion or labour, we can now fill those hours with…?    –The Last American Man by Elizabeth Gilbert

I used to dream about the perfect house and perfect clothes. Now I find myself dreaming about fresh air and blackberry bushes. Baby chickens and maple trees. Hanging laundry and a good pair of overalls. And maybe building a cabin one day: 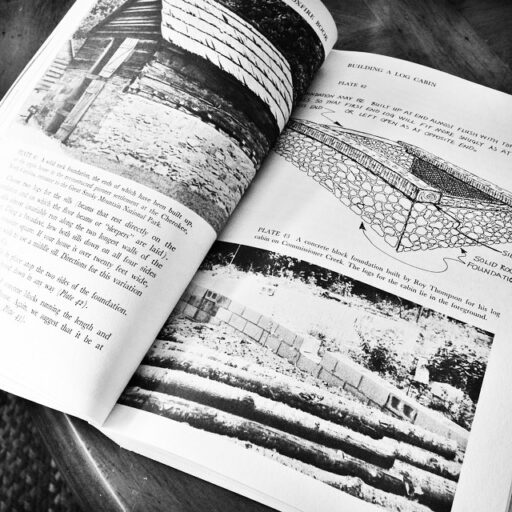 I love the idea of plain living.

How did this happen?

And how do I show others…..