Menu
You are here: Home / Life / The Raptor and the Mourning Dove

Today I heard a huge “boom” right outside my window. The dogs went wild and ran from door to window to door. As I peeked out our big living room window I could see a hawk upside down moving his wings a little. I locked up the dogs and went outside to see if he was okay. HIs little chest heaved just one or two more times and then he was completely still. I yelled at him trying to shock him back into this world, but he was gone.  Lifeless. Poor little guy. To the right of me was another bird, its neck broken, in a pool of blood. It pretty much died instantly when they both hit the side of the house going about 100 mph. Normally I wouldn’t share a photo of a dead animal but the hawk was so beautiful. Those yellow-rimmed eyes, still wide open: 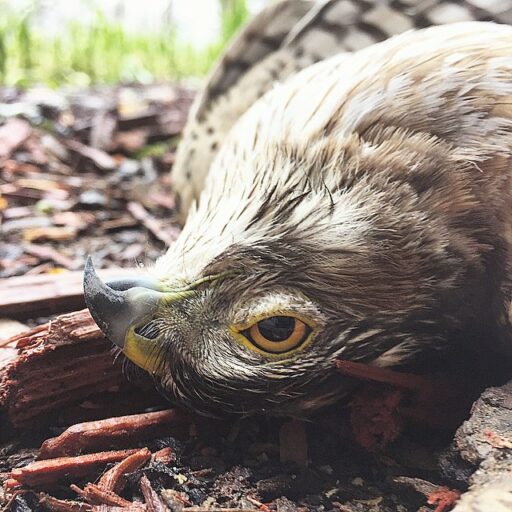 At first I thought that it was a pigeon that had been killed but it turned out to be a mourning dove. I won’t share that photo, even though it’s also quite beautiful I think with the thick crimson blood and the closed periwinkle eyelid, some normal people might have an aversion to it. But I did draw it: 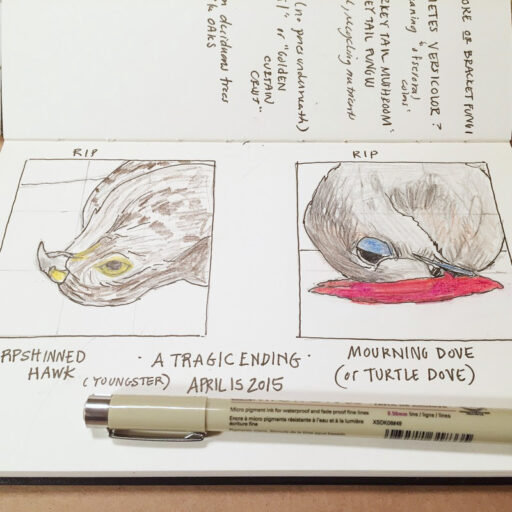 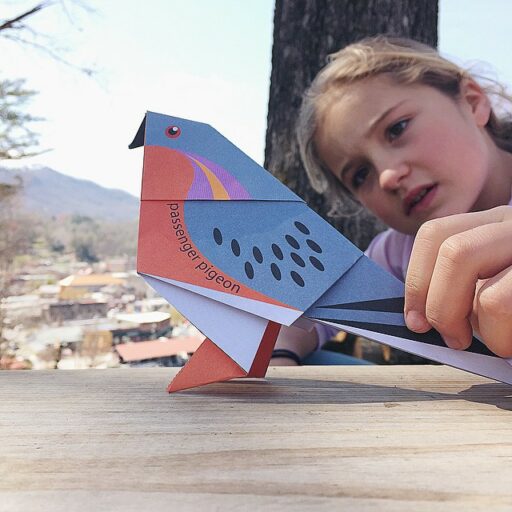 The last wild passenger pigeon died in March 1900, shot down from the sky by a boy in Ohio. The last one in captivity died at the Cincinnati Zoo in 1914. Her name was Martha. She didn’t live the best life. (imagine being the last of your kind on earth, an elderly zoo attraction in a cage, with no friends, i.e. planet-of-the-pigeon) Her body was saved though and you can see her at the National Museum of Natural History through the end of this year. In 1860 there were estimated to be almost 3.7 billion Passenger pigeons. Then they were hunted to death. Not one left. 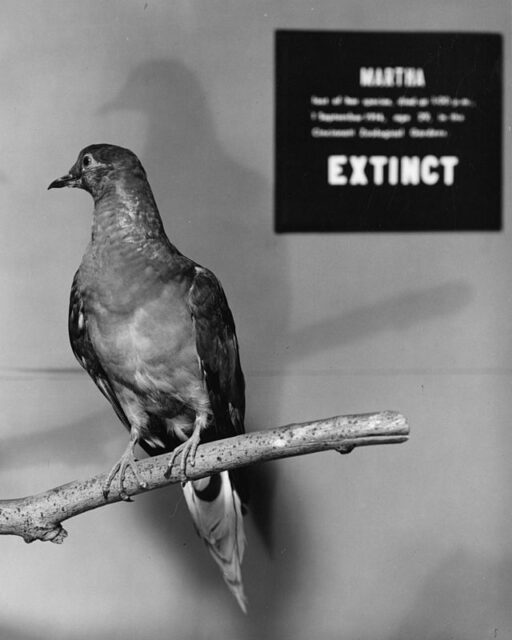 (You can read more about Martha here.)

Speaking of taxidermy, because I know you are super interested, right? I’m reading a book right now called Still Life: Adventures in Taxidermy. It’s kind of a memoir about taxidermy. Randomly picked it up at the bookstore.  I’m all for taxidermy to preserve animals, I’m just not a fan of it for the sport of killing trophies.

Honestly, for a split second I thought about the idea of keeping the tiny hawk and having him stuffed. But…the House on Hospital Hill is not the Biltmore Estate.  We don’t really have a place for skinned and stuffed animals. Plus I’d have to go through crazy hoops probably to get salvage permits and who knows what else.  The vultures around here keep leaving me feathers and it’s illegal to even keep those according to the North American Migratory Bird Act. Even if it’s from a dead animal. I doubt there would be a federal raid if I kept just one, but I won’t take my chances.

Have you heard about the Rauschenberg’s assemblage art Canyon? (You can view it here I don’t want any part of Migratory copyright infringement of bald eagle art.)  I was following the story a few years ago. Basically Rauschenberg’s piece contained a stuffed bald eagle which meant it could never be sold. According to the heirs of an estate that owned the piece that one little fact, in theory, would give it a value of zero for estate taxes. But the IRS placed a value of $65 million on it, which carries a huge estate tax:

“The IRS is saying you have to pay the tax. If you sell the work to raise the money to pay the tax, it’s a criminal offense and you go to jail.” -Ralph Lerner, art dealer, as quoted in Art News.

It was eventually donated to MOMA. No charitable deduction with a value of zero.

Sorry total tangent there. But I do think the use of discarded objects by Rauschenberg is very relatable to vultures in a way.

Anyway, it takes all my energy not to keep a feather…because I’m constantly picking up little things here and there for the shadow boxes we have. 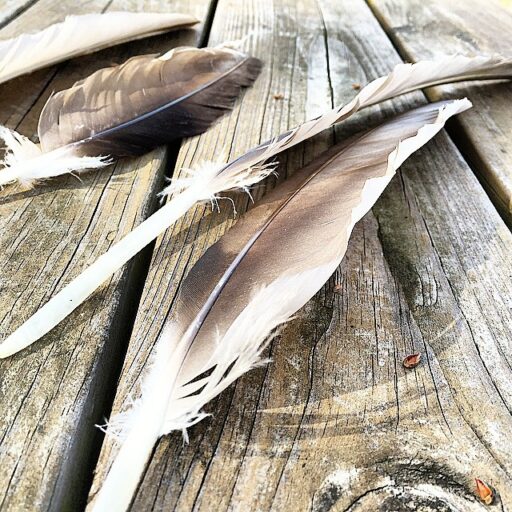 Seven vultures were just staring at me yesterday morning from a tree in our yard. FYI: they don’t like to be talked to. One by one they picked themselves up and flew away: 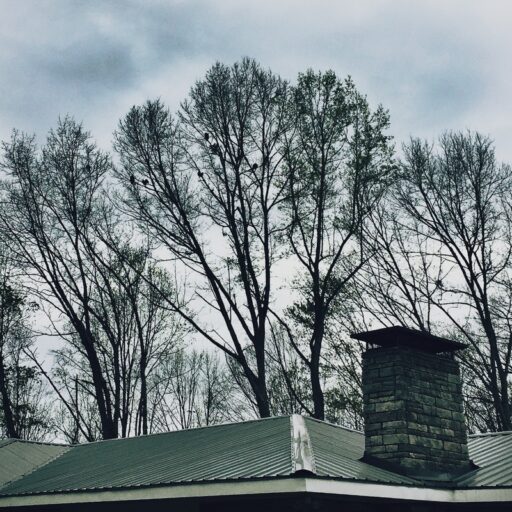 The vultures use the thermal air currents to fly with very little effort. I watch them all the time and they are so peaceful and unassuming, rarely flapping their wings. Just gliding. I think they are a great symbol for floating through life and I think a vulture feather carries a message with it: use your energy wisely. One circled me the other day…literally just about 50 feet away, just hanging out. I could see her eyes and then she flew off. Just curious I guess. Or maybe the crows told her that I give away popcorn occasionally on the tree stump.

I know I’ve written about this before but it’s primarily why I left the two birds for the vultures today.  A sky burial:

I re-watched the movie Kundun a while back and was reminded of the sky burial that Tibetan Buddhists use at death. The vultures  scavenge the remains of the dead, giving them second life.  There’s a powerful part in the book Last American Man where Eustace Conway’s horse Hobo breaks his leg and he shoots him and leaves the body for a year:

He left Hobo where he’d fallen. He wanted the vultures to eat him. He knew that the Native Americans believed vultures to be the sacred transport, the means by which a spirit is delivered from the earth up into the sky. So Eustace left Hobo there, where the birds could find him. Which means that, even today, whenever Eustace is working outside and sees vultures drifting in the air, he looks up and says hello, because he knows that’s where Hobo lives now.
–The Last American Man, Elizabeth Gilbert

(amazing book btw, I read it straight through and didn’t sleep for a night)

A year later Eustace went back for the vulture feathers, to collect them and to put them somewhere sacred.

Every time I see a vulture drifting in the air I say hello too. And thanks.

And as Whitman put it: What stranger miracles are there?

The circle of life.