All my dreams have come true…I am raising baby chickens. In the past few months I’ve read to the end of the Internet about raising chickens.

I don’t think I’ve been so excited for something in a very long time. I felt like an expectant mother awaiting their arrival. The moment I was notified that they had shipped I had all sorts of worries: Were they in a dark semi truck? Did they have little peep holes to look out of to get their bearings? Did the postal workers reassure them as they moved the box around?

On Monday of last week I was notified that my chickens had hatched and shipped. They flew on a plane overnight in a small box with straw padding and a heat pack.

On Tuesday a call came from the Asheville Post Office. The postal woman told me that my baby chicks had arrived and they would be on a truck to Bryson City the next day, but she offered to put them on a truck to Sylva and I could pick them up that same afternoon instead if I wanted. Brett just happened to be in Asheville and I asked him to run by the Sylva Post Office on his way home.

Me: Our new baby chickens. And don’t you dare open that box until you get home. They’ll imprint on you.

Me: Like in Twilight…werewolf bonding. They’ll think you’re their mother, but I’m their mother. It will be too confusing for them to meet you first.

Brett: I wouldn’t even think about meeting them before you.

A few hours later we got a tiny peeping box:

We introduced them to their new home where they’ll stay for the next few weeks. The first week they have to be kept at 95 degrees, and 90 degrees the next week, and 85 the next and so on. We hung a heat lamp from a camera tripod inside the large box: 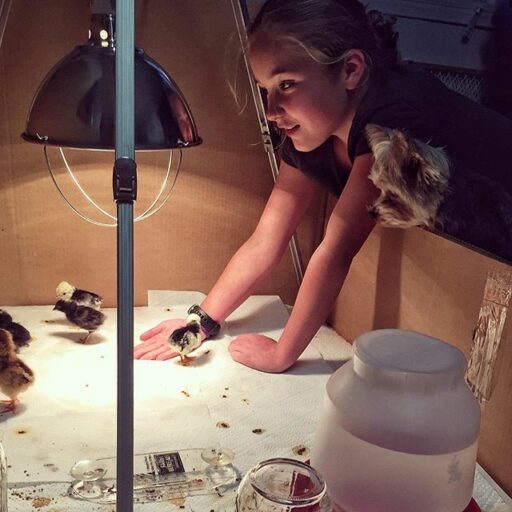 We are using paper towels as bedding right now, I think it’s easier to clean up. We’ll switch to pine shavings when they get a little bigger. It’s easy to clean such a big box because I just move the tripod heat lamp contraption to the other side and the baby chicks follow the heat so I can clean up the opposite side.

All they do right now is eat, drink and sleep. They are just the cutest things I’ve ever seen. I wake up and check on them all through the night. I check their little behinds for pasty butt which is something they can actually died from: dried poop stopping up their insides!

In our little flock we ended up with 8 Polish Frizzles, 2 Welsummers, 2 Buff Brahmas, and 3 Barred Rocks. We gave away 1 Barred Rock and 6 Polish Frizzles to local friends. We started with a flock of eight babies. This little gal just cracks me up. We call her FoShizzle the Polish Frizzle. Her little bouffant on the top of her head will turn into a plume of feathers! I love the heart on her head: 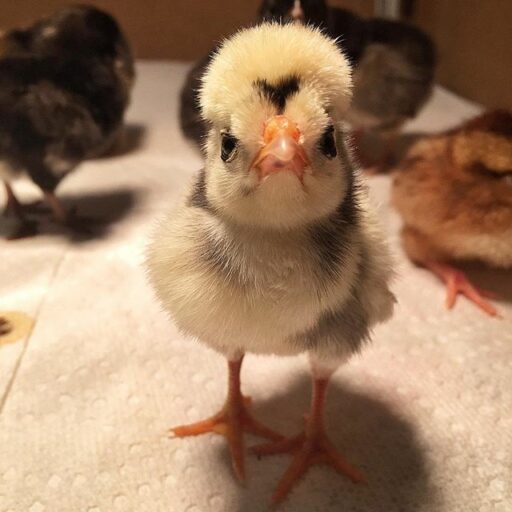 The Buff Brahmas are so fluffy…they look like they are wearing bustles underneath their feathers. The one on the right is a Welsummer: 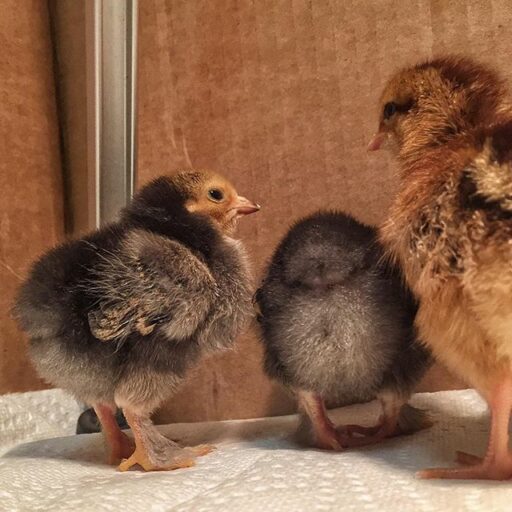 This week we are starting to renovate the Old Depot into a coop. We are building a wall in the middle of the building to separate the coop from the potting shed: 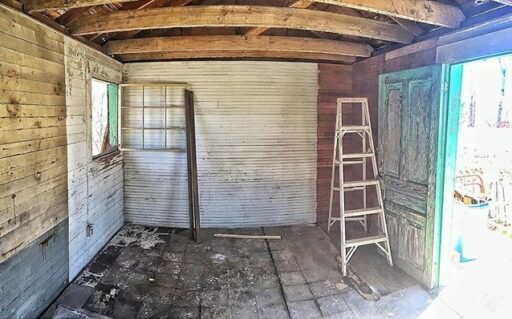 The inside coop will have a small entrance from the outside chicken run we also have to build. We excavated the right side last week so that we can add wire and wood and concrete to make the run predator proof: 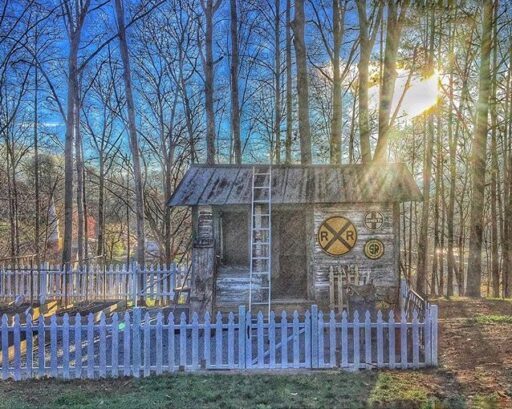 I think I already need a new iPhone…just to dedicate to chicken photos and videos. It’s like having my own personal sitcom to watch all day. I get nothing done around her anymore. I could sit and watch them forever…their little eyelids, their tiny wings, their small little chests moving up and down as they sleep. They’ll even eat out of my hand.

Brett: So how long will it take to recoup our investment in all of this from the eggs?

Me: Oh, um…sorry, we’ll never recoup what I’ve already spent on these chickens.

Brett: I know, but do the chickens really need a chicken swing?

Me: Wouldn’t you want a chicken swing if you were a chicken?

Brett: And a chicken harness?

Me: I think I should train them for walks in town every once in a while.

Brett: What happens when they get old and stop laying eggs?

Me: We’ll have a nursing home for chickens.

And we will have a nursing home for chickens. I just hope we can keep them safe for that long…from hawks and raccoons and all the other threats in the rural mountains. We are doing everything we can think of to prepare a safe haven for them, but we know there will inevitably be some heartache. I didn’t expect it to come so soon though. We lost one of our baby chicks two days ago. Whittle was tinier than the rest and wouldn’t eat or drink from the time we got her: 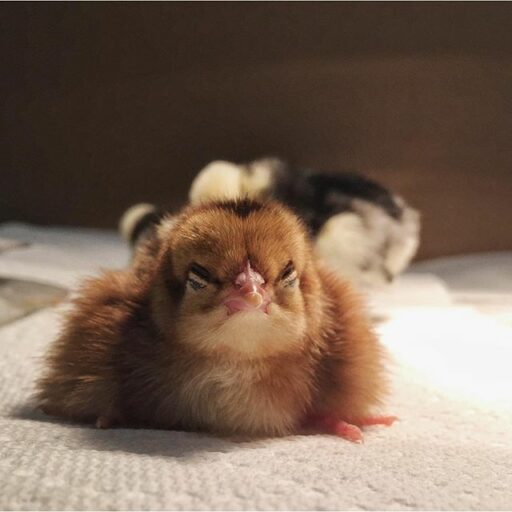 I held a medicine dropper in front of her beak for hours. I offered her everything the Internet said might help her. Nothing worked. I could see the life slipping out of her as she grew weaker and weaker. The other chicks would peck at her and walk over her causing her to stand up quickly and try to move out of their way, even with her eyes closed. One chick flipped her over and she couldn’t right herself. I scolded him for being so cruel and naughty. I built a small divider to keep the other chicks from her so that she could rest without worry. As her breathing grew labored that night I refused to go to bed, worried that she would die all by herself. I still tried to coax her into drinking sugar water but she wouldn’t raise her head. I put her in my shirt to keep her warm. She nestled in above my bra and I sang softly to her. I told her over and over in a whisper how much her new family loved her, even for such a short time. It was heartbreaking to feel her dying. I prayed to God to not let her suffer anymore and to just take her to heaven and a few seconds later he did. She stretched out her feet and neck just like Diesel our dog did when he died and then left her earthly body behind. She was so sweet, tiny and cute. She looked just like a little chipmunk. It rained yesterday and we couldn’t bury her so today her tiny body finally got a place of rest: 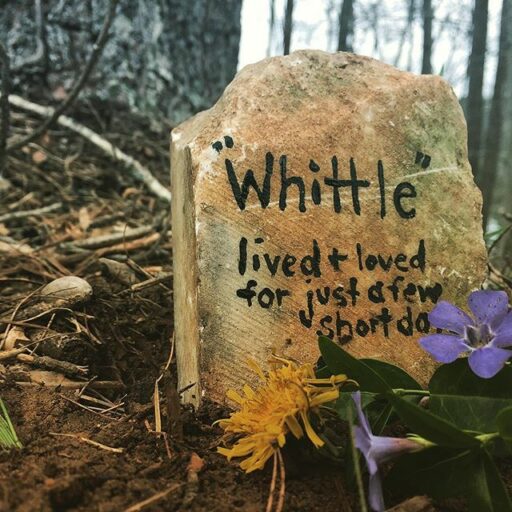 Despite the heartache, this now flock of seven has already brought so much joy to us. I could die tomorrow and I would die with a full heart. There is a real risk of me becoming a hermit….surrounding myself with chickens. And gardening. And found objects.

Me: I know what I’m going to be like when I’m old.

Me: I’ll be the woman with the two long gray braids under a large straw sunhat….and overalls….who tends to the animals and garden all day.

Brett: That will be okay with me.

Me: I guess the only thing that would change from now is that I’ll have long gray hair. Everything else has already happened. Oh, and I’ll make sun tea, in a huge oversized mason jar.

Maybe by that time I will have finally convinced Brett that we need a goat, a donkey and a few bunnies. And I’d love a sloth. And an orchard. Maybe beehives…if I can get over my fear of bees. Oh gosh…I do hope the chickens end up laying some eggs. That was my whole powerpoint presentation to Brett and Boo for why we should get them (along with all the free fertilizer and pest control we’ll get from them too). I stress out every time I buy eggs in the grocery store…it’s hard to find a humane egg where the chickens roam freely and are treated well. And eggs in the grocery store can be up to 60 days old. My chickens will have a chicken swing, and fresh herb lined nests, and a family that loves them. Maybe if they are happy they will lay happy eggs. And it will take at least one more sad chicken out of the factory system….that will make the investment worth every penny.