Menu
You are here: Home / Chickens / Meet the Chickens – Our Backyard Flock 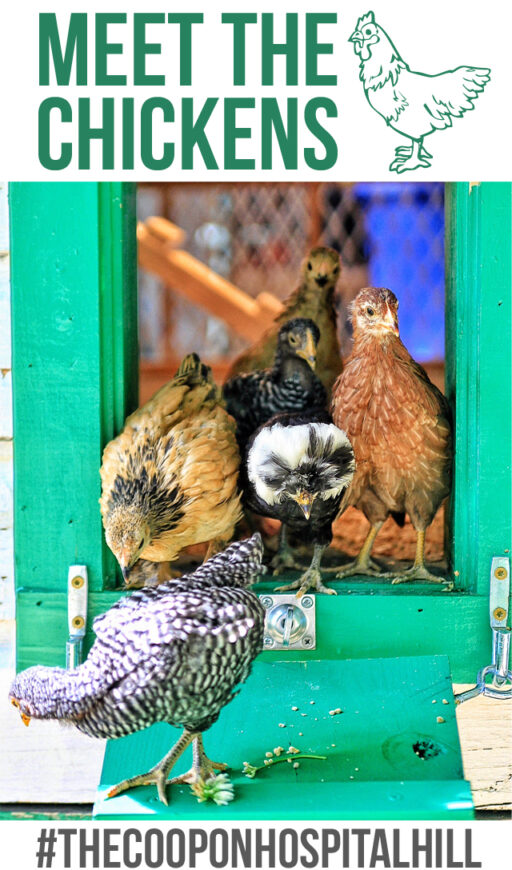 Our backyard flock was recently introduced to their new chicken run from the coop. The photo above is the moment that I first opened their little coop door to the ramp that Boo built for them. I just love their expressions! That’s Sunny peeking out from the back of the flock.

Each one of our chicks has their own personality…it’s so fun to get to know each one.  I wish I could just have you all over to meet our chickens in person but a virtual chicken meet and greet will have to do. I’m still working on the live cam idea. And I’m seriously contemplating having an “open coop” for the neighborhood. If everyone had chicken coops we could have a chicken house tour….but that might be a few years off until I can convince them all.

Our chicks have been so much fun. They are the first thing Boo visits when she gets home from school…always out there feeding them scraps and trying to teach FoShizzle tricks. Here’s a little about each breed of chicken we have so far and an introduction to each chick!

“The Welsummer (sometimes spelled Welsumer) is named after the village of Welsum, Holland, and was first imported into this country in 1928. When many people picture the stereotypical rooster, a Welsummer is what they have in mind–this was the same rooster featured on the corn flake boxes! Their hackles and saddles are fiery burnt orange and scarlet, with beetle black tails iridescently shining green, like the bars on their wings. The hens are modest, heathery brown, with their hackles shading to glints of gold and black. Even their eyes are a lovely red bay. The birds have single combs, medium wattles, almond shaped ear lobes and a strong, short beak. Welsummers are friendly, intelligent and easily handled birds that love to free range and forage for food but can also be kept in runs quite happily.” –My Pet Chicken

This is Rey. Yes, she’s named after Star Wars Rey…because Boo says she’s independent and kind of a loner. I call her Martha Dumptruck, she’s our largest, and most-in-charge-chicken. And she’s strong! She can rip a cherry tomato right out of my grip before I’ve even had time to prepare. 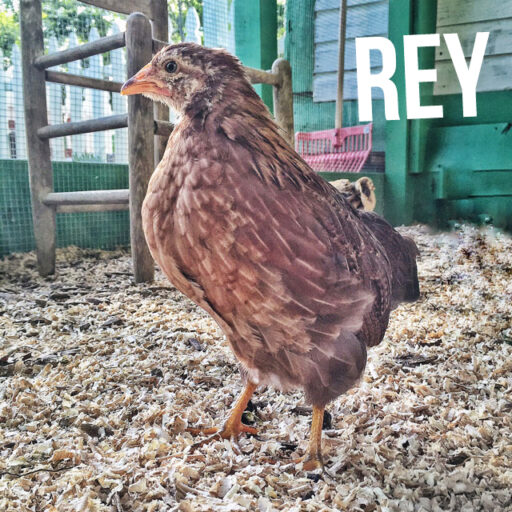 “Bantam brahmas are gentle sweeties with feathered legs and feet and profuse, fluffy feathering. Originally from India, these birds were bred for meat production, though the hens lay relatively decently and are great setters and mothers. This fancy breed of chicken makes a great pet for its quiet and tame nature, tolerance to the cold, huggability and sheer chic-ness.” -from My Pet Chicken

We have two Buff Brahmas, Plump and Sunny. They are so fluffy and their coloring is just beautiful. I love their feathered “boots with the fur” feet. Here’s what their feathers look like right now….they are two toned: 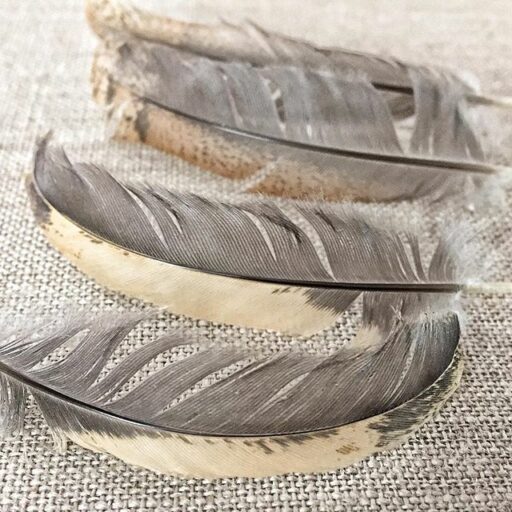 Plump is very elusive and you can tell that she’s in shock that I’ve actually managed to capture a non-blurry photo of her.  Most of the other chicks are very easy to catch but not Plump…even with her neck-disappearing-into-her-body-fullness she is so darn fast! She’s been that way since we got her. Once she is caught she’ll squeal so loud that your first instinct is to drop her and then the process starts all over again. It’s like a chicken-chasing scene right out of a movie. She reminds me so much of Aunt Fanny from the movie Robots. 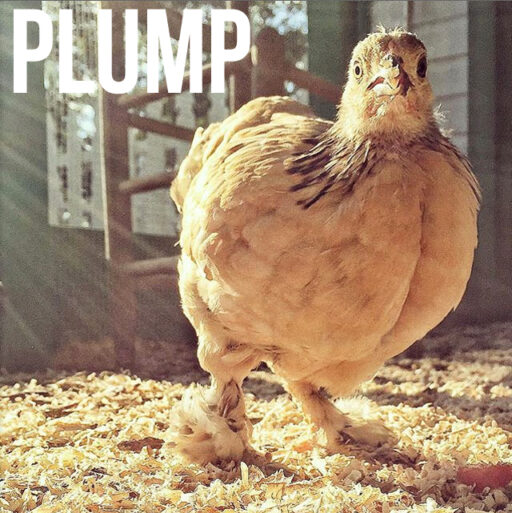 Sunny is much smaller than Plump. Our 5-year-old neighbor Natalie named her “Sunshine” or “Sunny” for short. Sunny is always very curious about my phone…whenever I’m trying to take a photo she will walk around to the side of the screen and watch what I’m filming, pecking at the screen. She loves to have her chest scratched and she was the first to set boundaries as a young chick, pecking at my finger when she wasn’t sure about it. 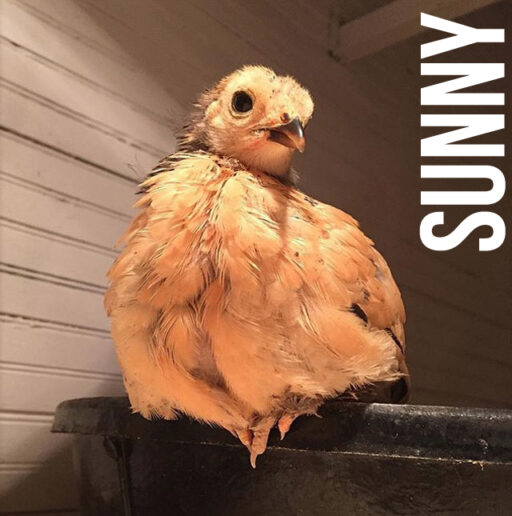 “Barred Plymouth Rocks or “Barred Rocks”, as they’re called, are one of the most popular dual-purpose chickens on small farms today, and this bantam variety is as sweet as can be. The heritage of the breed is unclear with reports of different crosses, but what is clear is that they’re very friendly, great layers of brown eggs and fairly cold hardy for a bantam. Though they tolerate confinement, they’re most happy when they get to range freely.” – My Pet Chicken

We have two Barred Rocks, M-LO and Henrietta. They are the tamest of all our chicks. And their feathers are striped…hence the “barred” name. You can be sure that I will gather and keep every single discarded feather.

M-LO is the smallest of all our chickens. M-LO stands for “My Little One”…kind of like J-Lo or J-Law, celebrity status. She’s the last of the chicks to get her big girl feathers. For being so small she’s always been the bravest! Most of the other chicks will just stand frozen and stare in horror at a strawberry or piece of watermelon when I toss it to them. M-LO is the one that always gets the courage to go up and peck at it. She’ll usually try to carry it off too, but not very subtly…it’s like she gives off a signal that says to the others “I’m eating something yummy!” Then all hell breaks loose and the whole flock is chasing M-LO around. 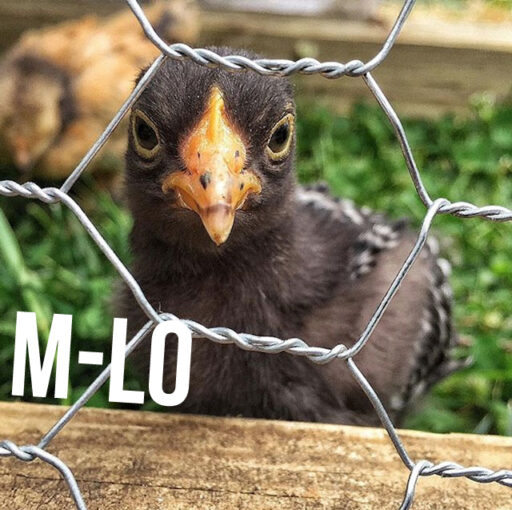 And then there’s Henrietta…our far-sighted Barred Rock. She’s much larger than M-LO, but I was worried about her for a long time because either she can’t see very well or she has a depth perception issue. If I hold out a treat for her she can’t pick it up, instead she pecks all around it, and then usually gives up out of frustration. It’s too hard to watch so I started just letting her eat straight out of the treat bowl, which has made her my most loyal chick. (Chick loyalty can be bought ya’ll.) Henrietta is the first to greet me each day and she loves to sit in my lap. 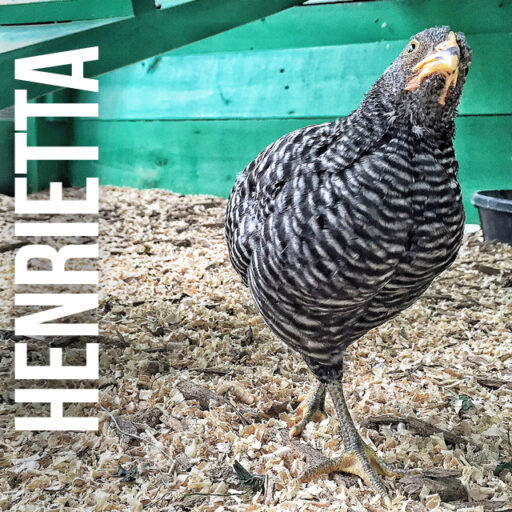 Polish are a very special and unique breed of chicken with their huge bouffant crest of feathers and v-shaped comb. They are tame and as such make good pets, but their behavior can be a bit wacky since their crest limits their vision! When in a flock with more aggressive breeds, Polish will tend to be on the low end of the pecking order. Polish lay smallish white eggs, and production depends on the individual. –My Pet Chicken

We have two Polish Frizzles: Ditto and FoShizzle. They are like tiny Sesame Street Big Birds.

Ditto was the first to try to fly out of the brooding box. She’s very opinionated and often greets my petting hand with a high, snooty trill. 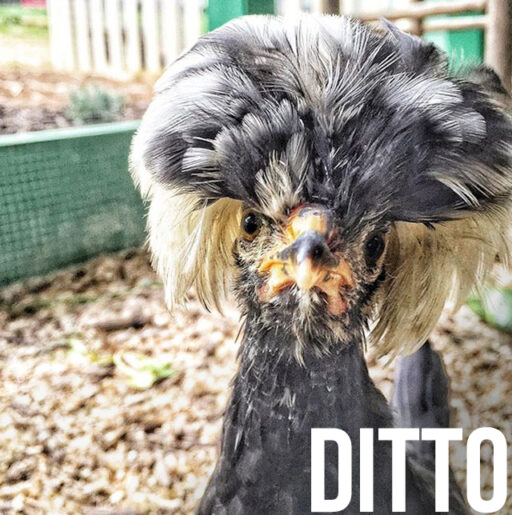 And Foshizzle is FoShizzle. Known as “Fo” for short. She loves to sit on Boo’s shoulder. And she has her own Instagram account FoShizzlethePolishFrizzle….because she’s pretty darn photogenic. She reminds me of Grumpy Cat. 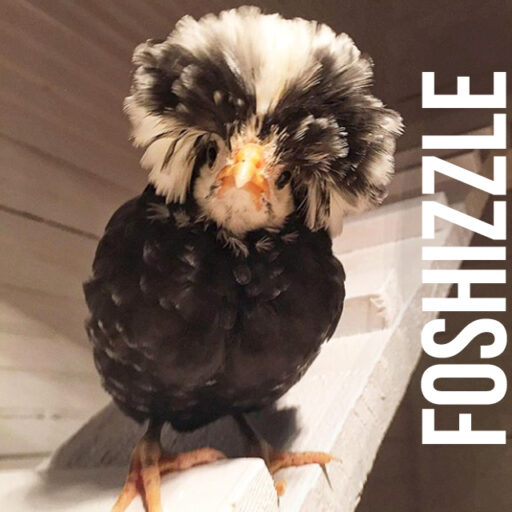 I mean, have you ever seen such a beautiful bouffant? It’s like she was born to be a Pantene model. Here it is in slow motion:

I often see both Ditto and Fo running up to each other and greeting each other with a “What’s up?!” They are so funny to watch. They definitely do act strange and erratic because they can’t see through their feathers, maybe that’s why they take such funny photos. You can see their quirky mannerisms below when Sunny jumped up and invaded Fo’s personal space a while back while they were still in their cardboard brooder box:

You can read more about the renovating of the old depot into a chicken coop here.

And all chicken-related posts here.