Menu
You are here: Home / Chickens / For the Love of Crows – The Crows on Hospital Hill

If people wore feathers and wings, very few of them would be clever enough to be crows.
-Henry Ward Beecher

I tip toe around our property in the morning, hiding from the chickens because they are so mad at me right now. If they see me they start squawking at me and make such a commotion that I’m sure the neighbors can hear them. But I have to keep the cooped up right now in the mornings because that’s when the big hawk comes to eye them. It’s either a Cooper’s Hawk or a Sharp-shinned Hawk and in any other situation I would welcome such a beautiful bird to our property….but this particular hawk is drooling over the prospect of tasting my flock. The good news is: I’ve got crows. I’ve noticed that the hawk only comes for breakfast and by noon the crows that live on our property have chased him off. 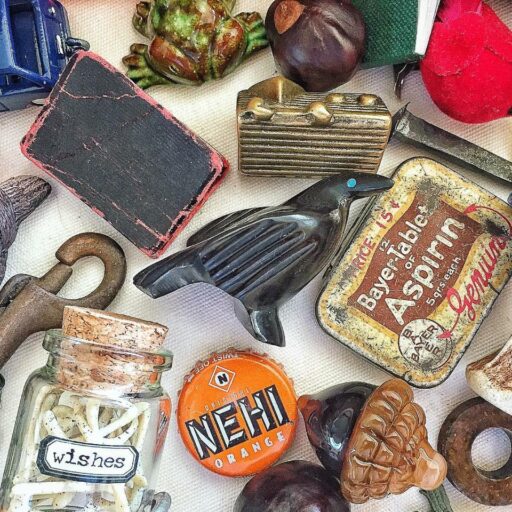 The crows love our property because we are on a low hill but our trees are the tallest around. Just like the term “crow’s nest” for a ship,  the natural nests look like barrel-like landing you might see on a tall mast. 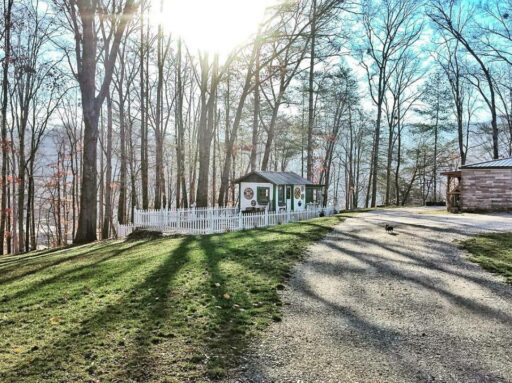 The crows are fearless. They will chase that hawk until he’s long gone. The most amazing thing I’ve noticed is that our chickens understand what the crows are cawing back and forth to each other about. Watching them closely I’ve learned some of their language as well. I don’t even notice when they are just talking back and forth to each other but my ears perk up when I hear the initial warning squawk. It’s fast and repetitive almost like the crow is saying: come quick! come quick! come quick! And then I can usually hear the warning travel across to the other nearby hills to as other groups of crows relay the warning message.Here’s a video of the crows chasing the hawk off recently….it’s pretty amazing to watch:

I can easily pick out an aggressive caw, one that will hurt the ears, it is so strong that sometimes I wonder how such a menacing sound can come from such a small size. The deep, growling aggressive caw means that the crows are already on the attack and trying to fend off a predator. I’ll be inside working and when I hear that caw I run outside as fast as I can in a panic…just to make sure the chickens are safe, and to make sure that Max didn’t slip outside. Sometimes it’s just the stray cat from down the street…who doesn’t really pose a threat but the crows chase him away anyways, maybe just for sport.

Whenever I come across an old bird book I’ll flip through it to the crow section. I found an old 1940 copy of Our Bird Friends and Foes when I was working at the used book store and it had this picture of a crow attacking an owl: 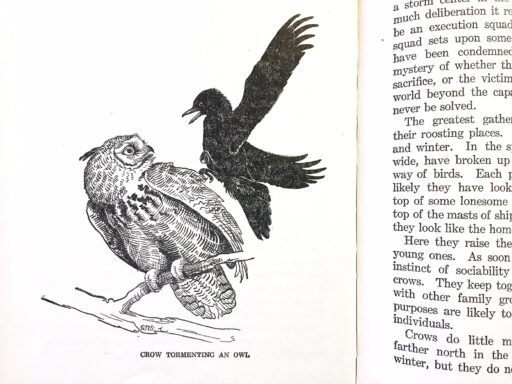 My chickens are lucky that they have the crows living above them, especially in the winter when the canopy of trees is bare and they are sitting ducks. The second the flock hears a warning call they all take off for little rocky nooks, into the woodshed or under the eaves. Can you spot Max hanging out with the chickens in the front yard? I wish he could protect them but I think a hawk might scoop him up just as easily. 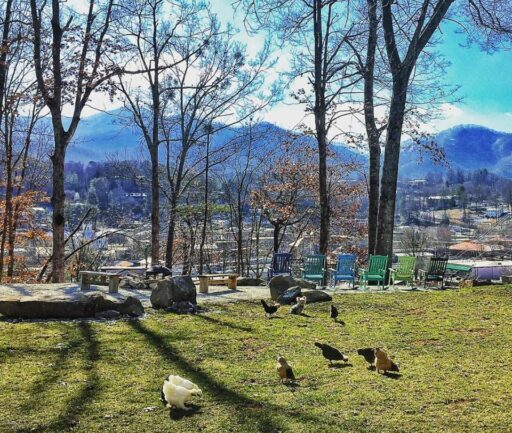 I love crows and ravens. They are very much my spirit animal. My friend Dwayne took of a raven welcoming him to Alaska last year: 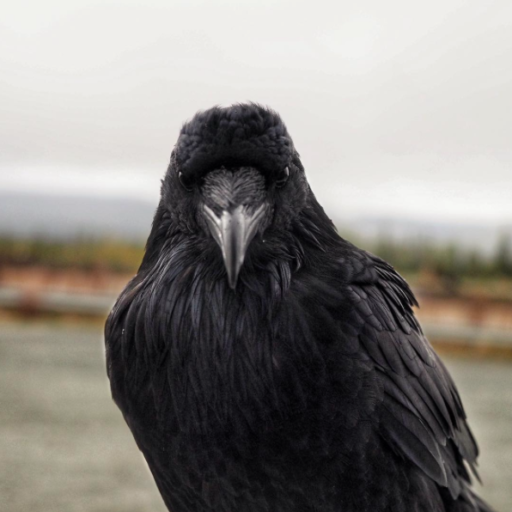 Crows have a very strong attraction to trinkets which makes me think of all my found object collections:

“Either as pets or in the wild state they have a peculiar habit of gathering and hoarding bright objects, these seeming to have a strong appeal to them. They will steal the bright toys of children, glass bottle stoppers, spoons, and other shiny objects, and store them away .Wild crows have been seen even to dig garnets out of soft stone for their hoards, to visit camping places for bits of tin, to forage regularly for treasures they may store away.” -Our Bird Friends and Foes, William Atherton DuPuy, 1940

Sienna and I love this book Sad Animal Facts: 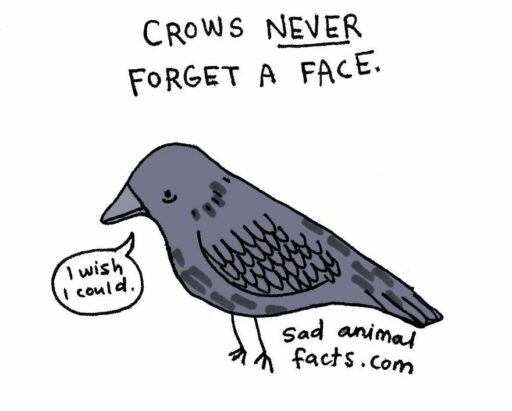 So many people think that crows are a bad omen but I think they are just misunderstood (just like the turkey vultures I’m obsessed with) The 1940 bird book I referenced above had an interesting study the Biological Survey did in the early 1900’s. The government wanted to see if crows were a friend or a foe to humans, in terms of what they ate. For five years, thousands of crows were collected from all over the United States, from all different seasons, and the contents of their stomachs were studied. I loved the cross-section of what they found…it shows the great and subtle balance of nature:

“It was found that corn is the staff of life of the crow. It eats more corn than anything else. It eats is at planting time which is a great annoyance to the farmer, but the harm it does can be mended by replanting. It eats it at the roasting ear stage, causing must to spoil that it does not devour. It steals corn form the shock. It eats much corn that is left in the field and otherwise wasters. It is guilting of material injury to the corn crop. In places this amounts to destruction.

But just here was found some important evidence for the defense. In the stomachs of these crows were found many insects. They eat many May beetles and the white grubs from which they grow, and these are crop destroyers. They eat great quantities of grasshoppers and there is always a race between grasshoppers and grass to see which will survive. Caterpillars are the great leaf eaters, and ti as found that these mushy fellows were a favorite baby food of the crows. They feed their youngsters great quantities of them. Every little crow east three times its weight in caterpillars during the time it is in the next.

Thus the question arises as to whether the insect eating of the crow does not do the farmer as much good as its corn stealing does harm It is estimated that it probably does, but unfortunately, while the benefits are general, the losses all fall on the corn farmer. Corn farmers are justified in idling crows by gun or poison wherever they can.

The stomachs showed that crows occasionally eat eggs and chicks from the barn yard. They do eat the eggs and young of song birds, birds that are themselves insect eaters. This is a loss to man.

Set over against this is the fact, proven by the stomachs, that the crow is an enemy pf rodents, eats many small mice and rats, and many young rabbits. Here, again, is a service to man, for the rodents do much damage.

After reading all of that I was curious to see if the book considered the hawk a friend or foe. Turns out all  hawks and eagles are considered friends…except for my hawk:

“The three villain hawks that deserve death are the cooper hawk, the goshawk, and the sharp-shinned hawk. These the farmer should shoot on sight. They are active, swift-flying hawks, that hang about the woodlands, hide themselves in the thick branches, dart forth with great speed, and seize the small chickens. The habits are different thfrom those of the hawks of the open. They are sly. They work under cover.”

Hawks weren’t added to the Migratory Bird Treaty Act until 1972, thirty-two years after the book was written. I couldn’t shoot a bird anyway even if it was trying to eat my chickens.

About that spirit animal thing….when I was sick years back there were always two huge ravens that hung  around my bedroom window. They greeted me in the driveway every time I came home from chemotherapy. They were at least 18 inches tall and had this funny little skip and bounce. I could hear them during the afternoon on the flat roof above my bed. When I finally had the strength to go up on the roof again I found that they’d collected rocks, pebbles, nut shells and other odds and ends up there. That’s when I first took an interest in them. 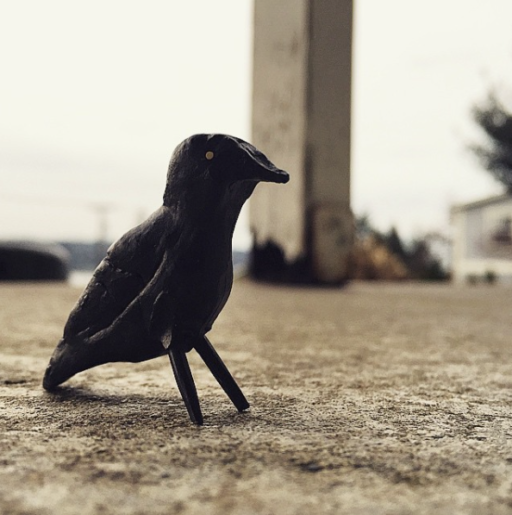 Crows are supposed to be an omen of change, they are a reminder to let go of old thinking and be willing to embrace new ways of looking at the world. I can’t think of a better messenger.

I’ve learned so much from the way of animal medicine…seeing an animal, finding a feather or footprint in my path is always a reminder of something. It’s definitely how I’ve stayed grounded and open to uncertainty the past few years. It’s all so interesting and healing at the same time. This is from a favorite book of mine:

[Animal Medicine] is anything that improves one’s connection to the Great Mystery and to all life. This would include the healing of body, mind, and of spirit. This medicine is also anything that brings personal power, strength, and understanding.

Our fellow creatures, the animals, exhibit patterns that will relay these message of healing to anyone astute enough to observe their lessons on how to live. The precious gifts of true medicine are free. Each lesson is based on one major idea or concept and, for the sake of simplicity, each animal has been assigned one of these lessons. In reality, each animal in creation has hundreds of lessons to impart, and all of those lessons are powers that can be called upon. – Medicine Cards: The Discovery of Power Through the Ways of Animals