Menu
You are here: Home / Things I've Made / One Year of Stitches and Buttons – Embroidery Hoop 365 Project

I can’t believe that I finished my One Year of Stitches and Buttons 365 Project…but I did! A project that lasted an entire year. Here’s the end result and I had so many questions on social media about the details that I’ve put together this post to try and answer all your questions! It’s pretty straightforward project and what I loved about it was that it was very portable. It stayed in a travel bag and I took it on road trips, to the carpool line, and I even stitched during Netflix. 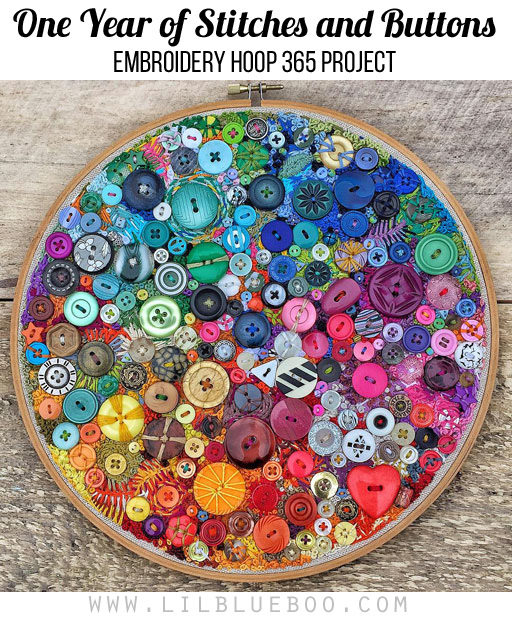 I started with a ten inch embroidery hoop with linen as the base fabric just so it was sturdy. Each day I added a button or some extra stitching and this is what it looked like after a week:

Progression at the end of last January:

It was starting to fill up around February:

There weren’t really any rules just that I had to account for one button or set of stitches per day. Sometimes I would add cross-stitching to a button or stitch a simple leafy shape:

At some point I began to run out of room for buttons and I purchased some tiny Micro Buttons and then began adding some beads as well:

I used French knots (or candle wicking) to fill in small gap areas:

I used buttons I’d collected over the years and even purchased some when I thought they would be an interesting addition:

Visually you can see that I did have some color order…I had blues and greens running together along the top of the hoop and then into purples, reds and yellows:

So much was added and it’s fun to just look at the detail:

Everywhere you look there’s an unexpected button or stitch color. The key was not to be so hard on myself if I missed a few days…it’s very easy to catch up on this project so you can even make it a weekly project.

As I sewed I kept re-stretching the fabric and sewing in the loose edges into place. The underneath is a mess, but also just as pretty in a way.

The finished hoop! And it’s going to hang on the wall just as it is!

Thanks so much for following along this past year! If you make your own make sure to tag me in it and add the new hashtag #oneyearofbuttons so others can find you! I did finish my painting project as well so I will try to post some of those photos as well but for the time being you can see the most recent paintings on Instagram!

(Click here to view the finished piece in hi resolution!)