Menu
You are here: Home / Archives for Booism

We were watching an episode of Little House on the Prairie the other day (shocker, right?) and the following conversation took place:

Boo: I’m not afraid of dying….unless it’s not how God wants me to die.
Me: What do you mean?
Boo: Well like if I die from being old like the Indian did…that’s okay…but I don’t want to be killed.

I asked for your examples on Facebook yesterday. Thank you for all the replies….many brought tears to my eyes and definitely lots of laughter….here’s some of what you said:

When my son was in first grade he approached his substitute teacher, who was being mean (and had been mean in the past) and asked her if she would like him to pray for her. She declined the offer, but asked him why he had offered. He said “my mommy says we should always pray for mean people because they probably have pain in their heart”. He said her eyes “got wet”. (She was never mean after that) – Karen B.

My mother-in-law died in the night. My husband was with her in Michigan. I was with my 3 year old son in NC, watching him sleep. When he woke up, I said, “Baby, Mommy has some news to tell you.” He said, “I already know Grandma died, Mommy. It took her all night to die and get to heaven.” Rachel P.

My husband passed away when our son was 3 and our daughter was 1. My son remembers him but my daughter doesn’t. One day when she was 6 my daughter was in her room crying and I asked her what was wrong. She said, “I’m scared I won’t be able to find daddy when I get to Heaven, I don’t remember what he looks like.” I told her that it would be okay and that he would find her. She said, “I want to live a long time, but I also can’t wait to meet him.” –Alida L.

My daughter talked about my dad, who died several years before she was born, I was crying looking at his pic and she said “Mom, my pappy sent me to make you smile again.” She talks about meeting him in heaven before she was born. She’s told me stuff about him she couldnt know!! Took my breath away! -Lynn S.

My daughter was a twin and her twin brother died at 7 months. When she was about 4 we had visited his grave on his anniversary. We were leaving and she grabbed my hand and said “night night little buddy, Evan, sleep tight.” I started crying and she looked up and said “don’t cry Mommy he said he is alright.” Seriously, melt my heart!  -Jennifer W.

We were at a funeral and my daughter said “Mommy I know we are supposed to be happy when someone goes to Jesus in Heaven, but I sure wish we could all go at one time so no one had to miss anyone.” –Amy O.

My daughter’s grandpa passed away (her father and I are divorced) I told my daughter I was sorry and told her not to be sad he was in heaven. My daughter told me she was worried for her family, she already knew her Grandpa was in heaven. –Joy C.

My same daughter also has a stuttering problem and said told me today her friends at preschool “broke up” with her today because they don’t understand the way she talks. I felt so broken hearted for her and asked her how she felt about it she told me, ” It’s okay Mom, I will find a best friend and love her even if we don’t talk all the time she will just love me anyways.” – Jennifer S.

I was once watching my future step-daughter while her dad was at work. We were playing dress up and she went to put a ring on my finger. As she placed it on my finger she said, “Now you must love him forever.” That was a year ago when she was three and her father and I are getting married in October. –Stacey D.

When my son was about 3, we were driving to the Outer Banks and there were medians full of wildflowers. He looked at me with a serious face and said: “Mom, if I could, I would pick those flowers and spell out the words I Love You with them.” I will never forget that, he just turned 21.  –Candace H.

My son, at 4, created a large lump of Playdough that actually really looked like a human heart. I asked him what he made. He said, “it’s a heart and it can connect to everybody.” –Tamara H.

“Mama–I think your superpower is love.” (Maybe not so PROFOUND, but the fact that I remember it says something!)  -Amy H.

“Mommy when I grow up I want to be a butterfly then I can always fly to wherever you are.” -Deborah T.

My son was 3 or 4. Riding in the car I told him, ‘I loved you with all my heart.” I could see, in the rear view mirror, he was trying to understand the statement. I explained that my love for him filled my heart with my favorite thing (him)! A few minutes passed and I here from the back of the car….“I love you with all my ice cream!” Melted my heart then and to this day when he tells me it. {he is 11 yr!}  -Jane P.

ON THE SMALL STUFF

My 8 year old son (now 16) asked me this: “Mom, if Saddam Hussein were about to be hit by a bus – would you push him out of the way and save him or let him get hit? What would God expect from us?” We had a great discussion and was shocked he would think about this at such a young age. On the other hand, it takes the wisdom of a child to ask a question like this  -Carina S.

We were getting ready for a trip to Florida and I was stressed and up late trying to pack. I was yelling at my husband and I said “forget it, we aren’t going.” A little later the kids woke up and came out to bring me their stuffies to pack. I told them I didn’t know if we were going. My five-year-old son sat down next to me, as I was covered in luggage and laundry, and said, “It’s alright, Mom, it doesn’t matter what you pack. Just go get some stuff from the bedroom and throw it in the suitcase. It’s just clothes, Mom, it just…doesn’t matter.” -Angela L.

END_OF_DOCUMENT_TOKEN_TO_BE_REPLACED

Boo: I need a new bed.
Me: What’s wrong with your bed?
Boo: The design….the whole design is just scary.
Me: Scary?
Boo: Yes….the poles have eyes….and huge teeth.  They watch me.
Me: What if we just imagine they are cupcakes?
Boo: Won’t work. People see things in different ways you know.

Point taken. I see them now.  And I think the eyes are watching me too.

Time for a new bed. 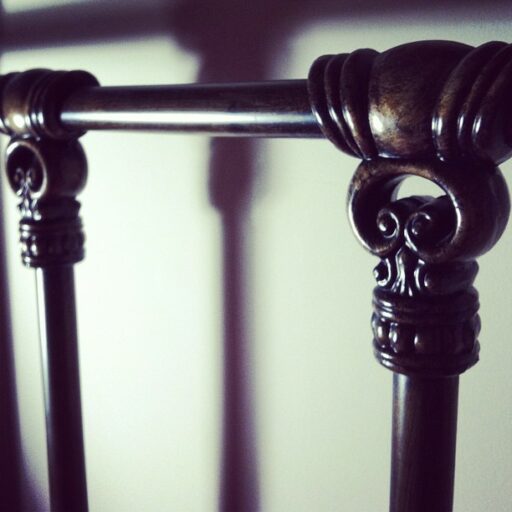 We’ve had an issue with eyes today.  While I was teaching VBS today a little boy raised his hand and asked:

Why is the mouse dead on your dress?

He’s right. The mouse does look dead. Now Boo wants to know why the mouse is dead. I don’t have an answer for that. 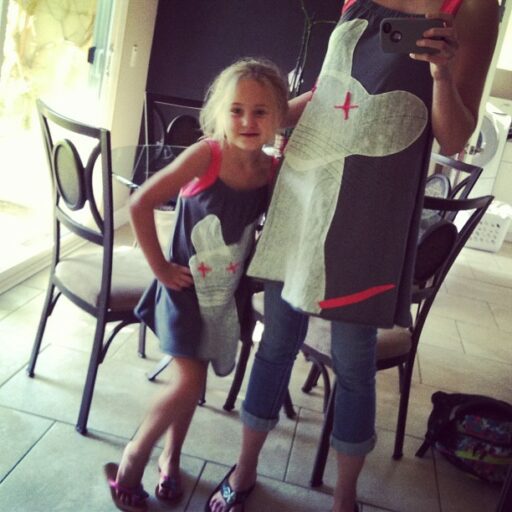 I also don’t have an answer for this conversation that took place in the car:

Boo: Why does God make bad things?
Me: He doesn’t make bad things…I think it’s about free will. Because we are free to do what we want….bad things can happen.
Boo: But that doesn’t explain tornadoes….

END_OF_DOCUMENT_TOKEN_TO_BE_REPLACED

Boo graduated from Kindergarten last night.  She cried with emotion the entire way down the aisle. Sweet girl. 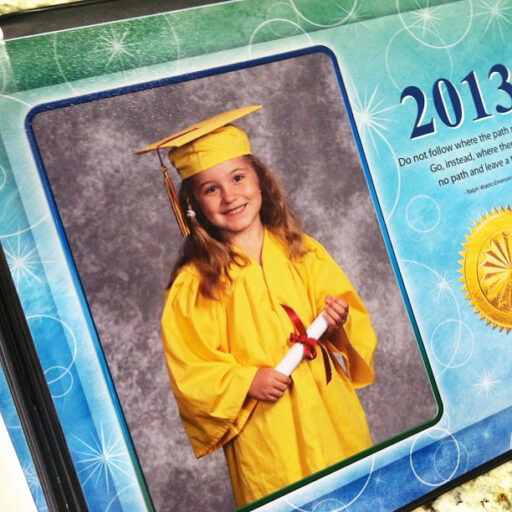 Remember the notebook I wrote about last year….the one that I leave in the car? It has some funny entries I thought I’d share.  Each day hearing her “most interesting news” from school was the highlight of my day.

Here’s a few of the most important things that happened at school according to a Kindergartner: 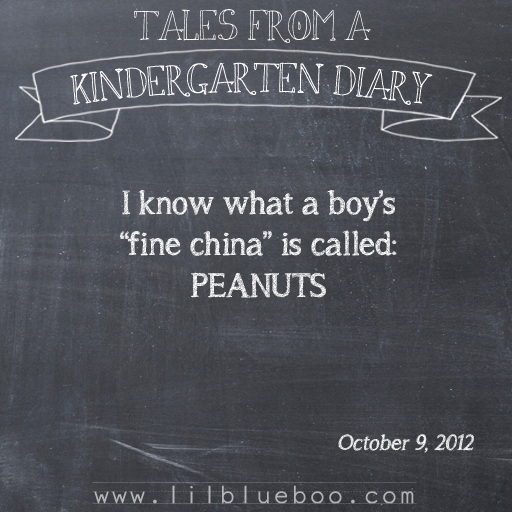 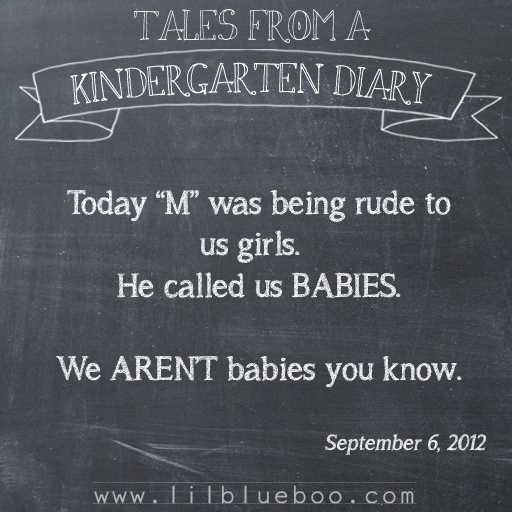 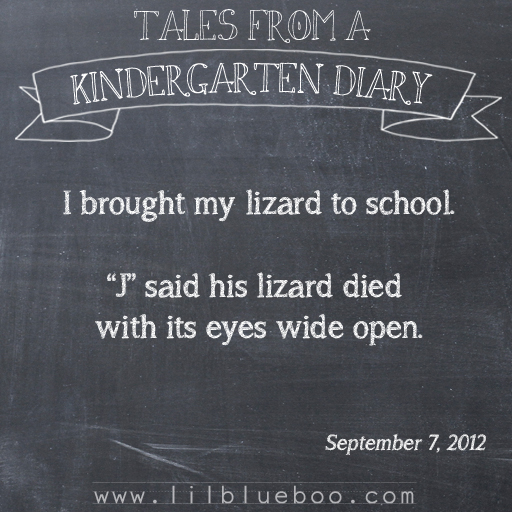 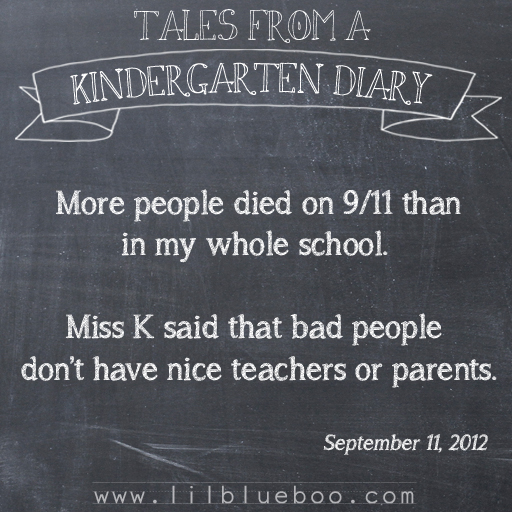