Menu
You are here: Home / Archives for House on Hospital Hill

I woke up this morning, grabbed a hammer and headed out the door to the new house. First I went and grabbed coffee because I promised roofer Larry that I’d bring him a cup first thing. And then….

I took the wall down.

I took a little more work than I thought it would because one side was concrete plaster. Brett helped me pull down some of the heavier pieces. Now the house is brighter. I can see the mountain view from almost every room of the house.  As Steve Jobs would say: People don’t know what they want until you show it to them. True story. 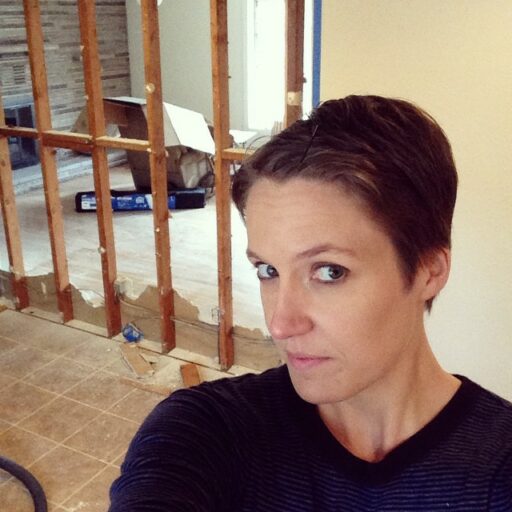 I won’t bore you with daily progress here, just the occasional house update posts, but you can follow more often on Instagram if you are curious at #thehouseonhospitalhill

This is my new little office space as we work on the new house: an abandoned lazy boy, a piano bench desk, a tiny space heater, and a large window to look out of.  It’s kind of nice not owning any furniture…clutter free…open and bright: 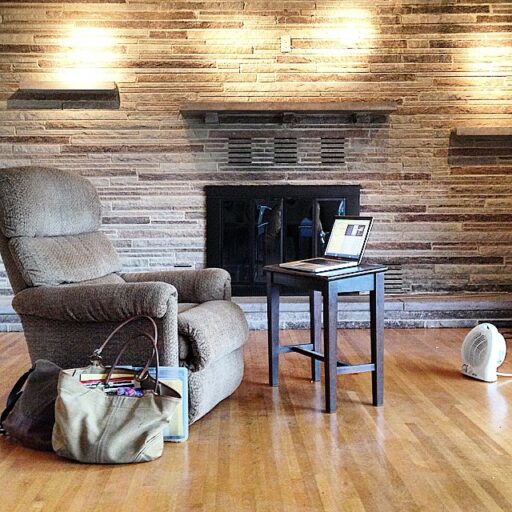 Below my “office” there has been a lot of work to get the plumbing up to code. It took a few days for Brett and our friend Erik to cut that huge trench in the basement floor just to get to the existing plumbing. It looks like a huge mess but it will mean all the plumbing is fixed.  It’s nice having a basement where plumbing and wiring can be easily added and removed! 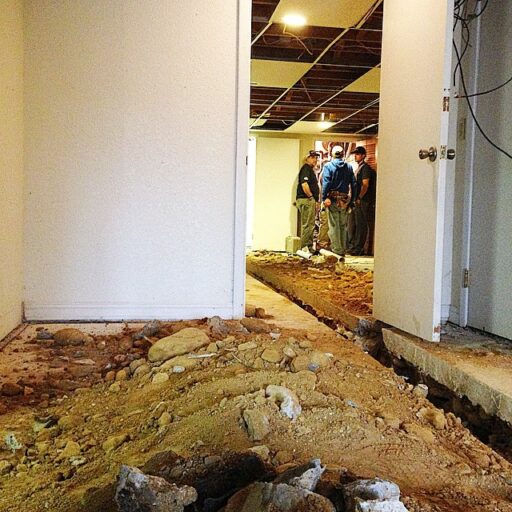 Then there are the efforts to stop the leaking roof. We knew it was leaking when we went into all of this. It just makes sense to replace it now rather than later. We decided to go with a charcoal gray metal roof, and they are installing it right over the existing shingles: 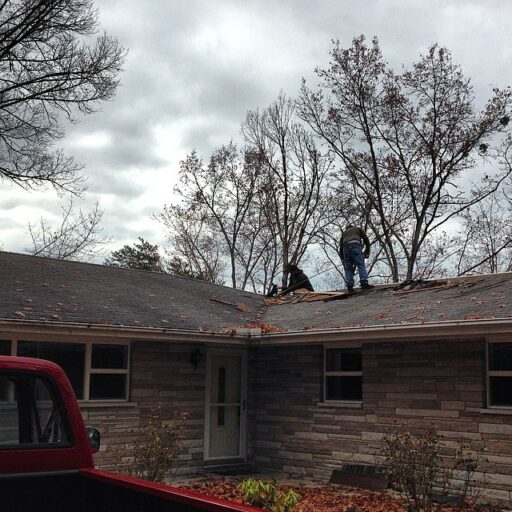 Brett’s spent a lot of time in the attic and basement. And he found this great old sign. Just Thru Town it says.  The old owners used to own a pharmacy in town so it probably had something to do with that: 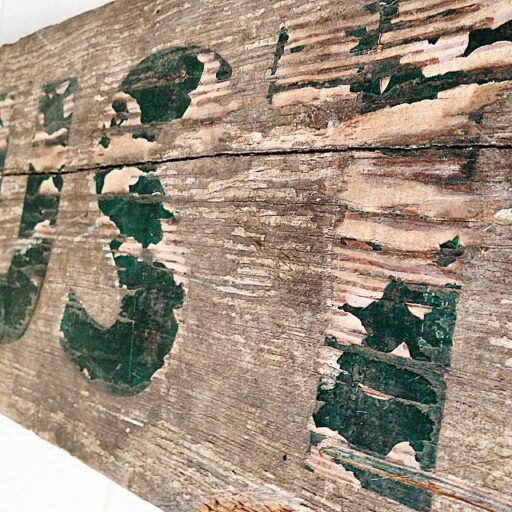 There were three HVAC systems in the attic, left behind over the years. The current heat source is a boiler that runs off of oil and runs water through baseboard heaters. Very expensive to run so we are installing something more efficient and hoping to get natural gas eventually: 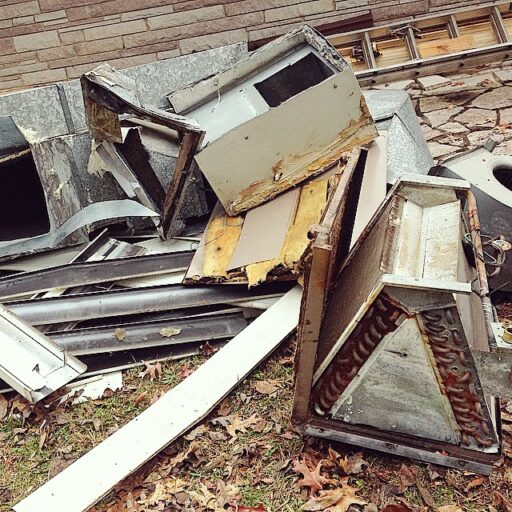 This is my subtle hint that I’d love to cut a hole in this wall so that I can see out the big living room window from the kitchen.  Back me up on this everyone. 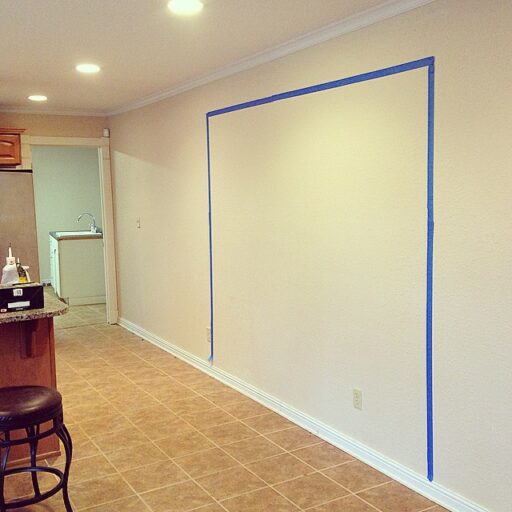 Not much else to report today.  Just keeping ourselves really busy getting ready for the holidays and working on house projects. Boo and I helped Mort and Lainey decorate the Hemlock Inn’s Christmas tree yesterday so I’ll share that as soon as I get a good photo of it.

I learned this, at least, by my experiment: that if one advances confidently in the direction of his dreams, and endeavors to live the life which he has imagined, he will meet with a success unexpected in common hours. He will put some things behind, will pass an invisible boundary; new, universal, and more liberal laws will begin to establish themselves around and within him; or the old laws be expanded, and interpreted in his favor in a more liberal sense, and he will live with the license of a higher order of beings. In proportion as he simplifies his life, the laws of the universe will appear less complex, and solitude will not be solitude, nor poverty poverty, nor weakness weakness. If you have built castles in the air, your work need not be lost; that is where they should be. Now put the foundations under them. -Henry David Thoreau

When we moved to the mountains I only expected it to be a year.  I can’t believe we’ve already been here for 6 months, although it doesn’t seem that long at all. I thought I would want to be a gypsy for a few years, but it turns out I’m just a gypsy in spirit. I don’t question. I just move.

When we walked onto the property I knew we were supposed to live there. I knew it.  No questions. Like every other house we’ve ever lived in, I knew right away. I could see what a little love would add to it. It was 2 bedrooms and an office, a full basement with art studio potential, and 2.5 acres. It had been on the market for a long, long time.  Probably because of the work that it needs, but I like to think that it was waiting for us.  We had a pretty strict budget, and thought deep down that they probably wouldn’t accept our offer. But they did. And a few weeks later it was ours.  It was waiting for us.

It has a wonderful story to go with it. It used to be owned by the pharmacist mentioned in Bryson City Tales. Three siblings were selling it after their parents had passed away.  We have since become close to one of them, Debbie.   When I told our realtor Marty that I would love some old stories of the property he passed along the message.  I never expected what Debbie delivered: the most thoughtful welcome package that included a slideshow of the house’s history through the years, the original 1952 platt map, flower bulbs that her mother used to plant and some arrowheads she found on the property when she was a young girl. Marty said it was the first closing he’d had where the buyers and seller were so keen on meeting each other.  We met in his office right afterwards and both Debbie and I cried when we finally met in person.  I told her:

We’ll take really good care of your family’s house, and its history. 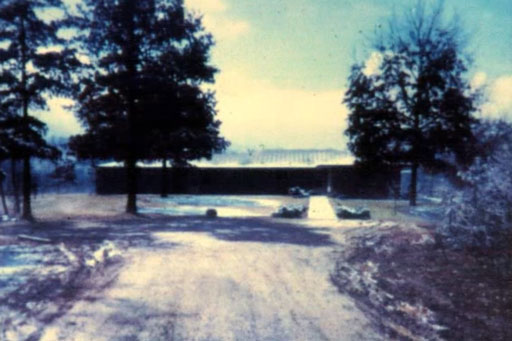 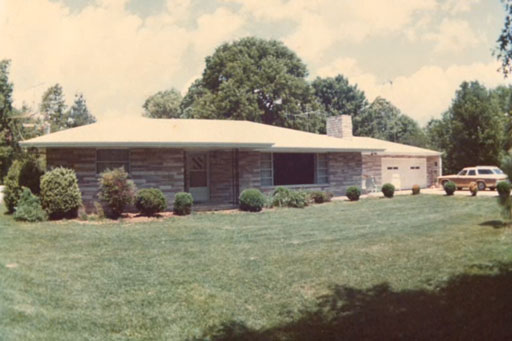 We definitely have a few months of work ahead of us and we aren’t in a hurry because we are still enjoying our time here at the Hemlock Inn with Mort and Lainey and the guests. And like any old house there are drainage issues, plumbing issues, old house issues. Oh and it needs a new roof like asap. That’s just a start.  And we view all this stuff as our chance to add our own spin to it. The Hemlock Inn closes down for January, February and March so it will be a great opportunity for some winter projects.

And remember we sold all of our furniture before moving from CA? I’m going to try and furnish the entire house through bartering, picking and just making it ourselves.  We already found a free desk on Craig’s list that will be perfect for writing and I found the perfect dining table for $75 from Habitat ReStore. I see kitchen gardens, tire swings and lots of DIY.  I’m ready to roll up my sleeves again!

Here it is today…4 billion acorns came with it: 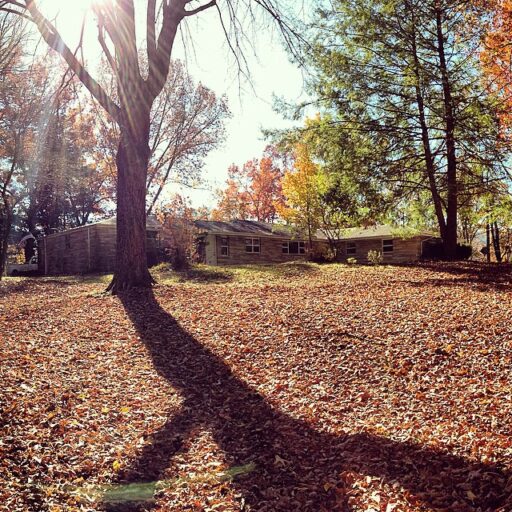 And this is why I fell in love with it…the view of the city.  I’ll sit at that table all year long and write. Best part: the concrete deer came with it too: 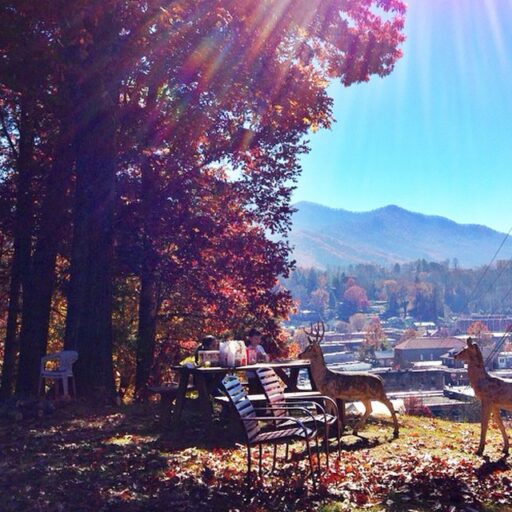 Brett started cutting and digging out a huge trench in the basement this week for new plumbing. And removing all the drop ceiling to expose the rafters. An awesome mess…just because we like projects I guess?! 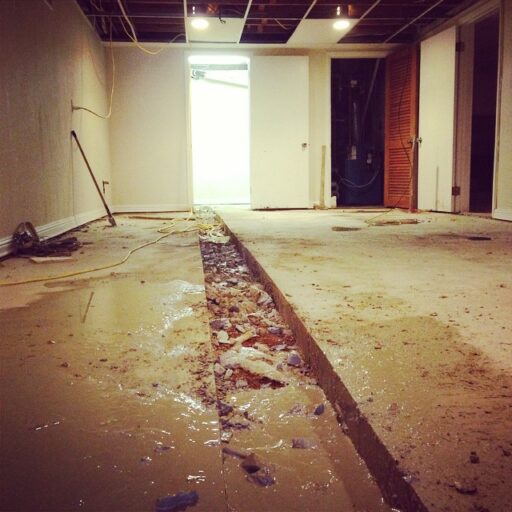 Today I was asked what I was most looking forward to in our new place next year.  My answer?  A refrigerator with an ice maker. Instant ice! The best invention ever.  And the view.  I’ve never had a view of anything until this year.  I like being able to watch the hustle and bustle of the town below.  And the train whistle throughout the day!  It feels really magical actually. The previous owner was also a pilot and took this photo way back when…the house on the hill:

“…building castles in the air….” 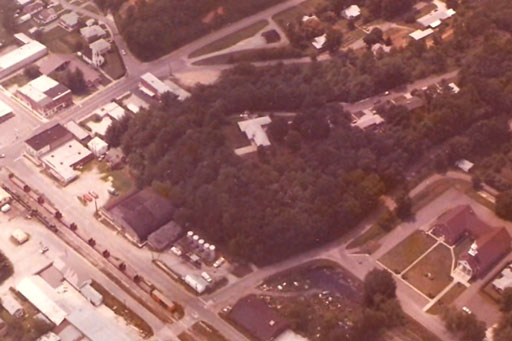 And yes, I’m still kind of in shock myself that we own a house again. A 1950’s rambler at that with endless projects. But I’m ready to set down roots in this small quaint little town of Bryson City. I feel like I’m always building those castles in the sky….and sometimes they do get foundations. Simple, sustainable and within our means.

Any house gurus out there? I’m leaning towards a brown tin roof and painting the outside some shade of white (because you know the entire inside is going to be white and gray.)  Maybe white gutters when we have to replace those. I welcome any ideas or suggestions and anybody with Photoshop expertise that wants to mock up a ranch house for me! 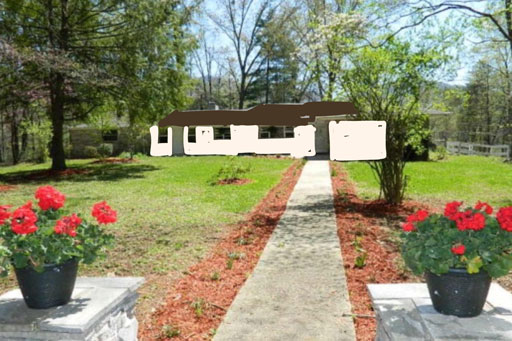 P.S. Don’t you think those concrete deer would be great as part of a Griswold-style light show for the holidays next year?