Menu
You are here: Home / Archives for fall leaf color

I could never live anywhere again where there aren’t four seasons. If I had to pick one season I’d want to freeze time right in the middle of the North Carolina mountain fall.

The leaves are just starting to change in Bryson City. There’s still a lot of green but much of the yellow is starting to show up. I took this photo the other day at my friend Beau’s place…Buffalo Creek Rentals: 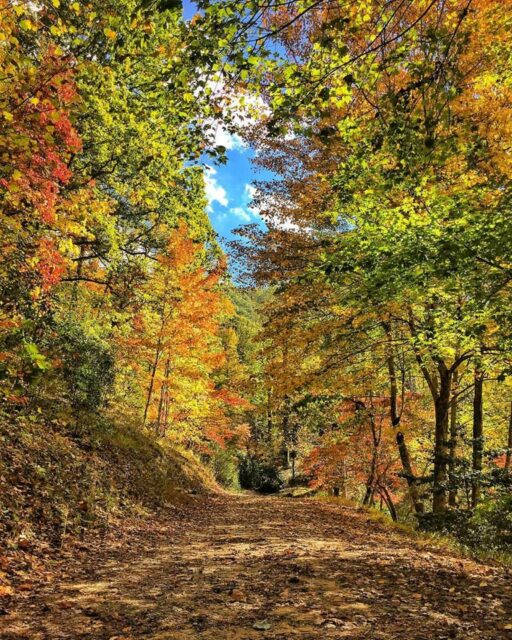 I knew if the leaves were just starting to change here that they were probably almost at peak a few hours north. The temperature is usually about ten degrees cooler where my mother lives in Linville, NC. Boo was on fall break last week so we hopped in the car and headed up that way. The first thing we did was stop at Barber Orchards for some road trip goodies. We drove away with a dozen apple cider donuts, apple fritters and fresh apple cider. 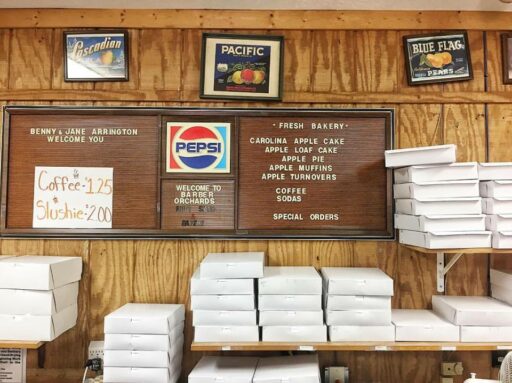 We always do a lot of the same things in Linville, because none of it ever gets old. First, we went to the top of Grandfather Mountain. The visibility was breathtaking from the Mile High Swinging Bridge: 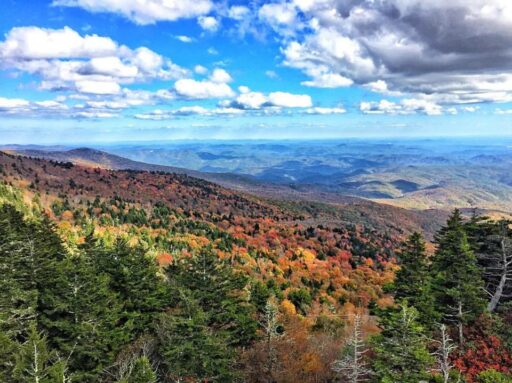 This was a photo of the other side towards Linville: 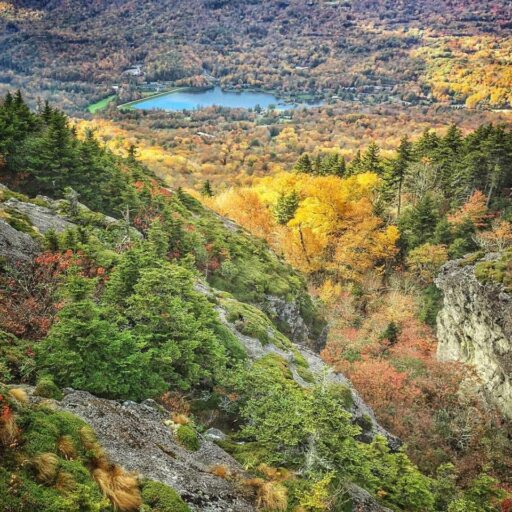 Visitors climbing out on the ridge: 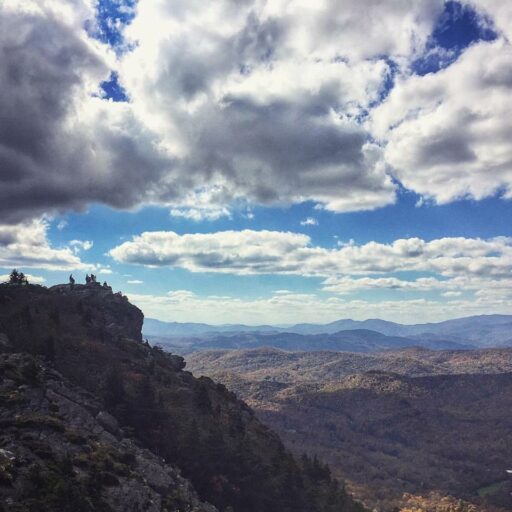 My mother’s back porch has the most amazing view of the profile of Grandfather Mountain: 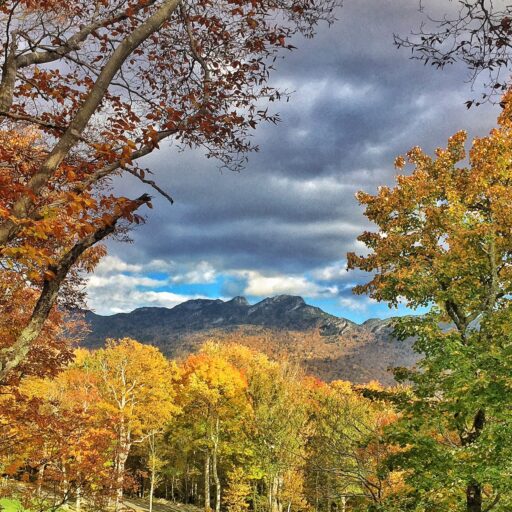 The next day we drove the Blue Ridge Parkway from Boone back to Linville. It’s less than 20 miles but there’s so much to see and do: 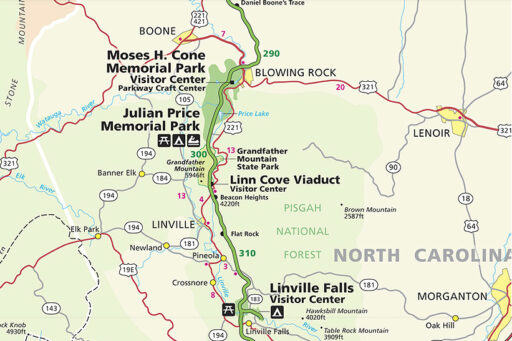 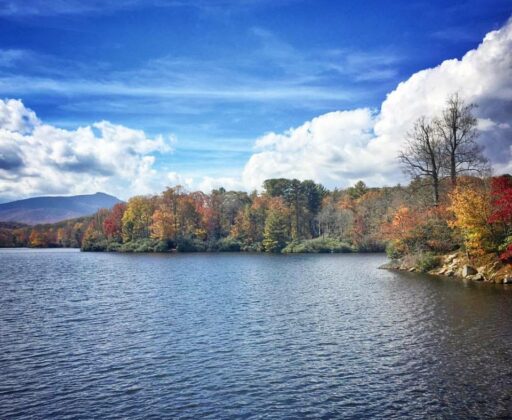 This is a stretch of the Parkway right before you hit the Linn Cove Viaduct: 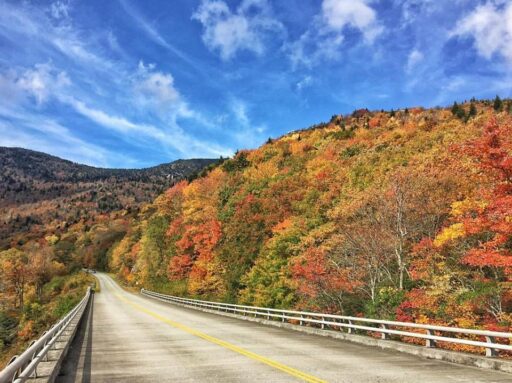 The Viaduct off in the distance: 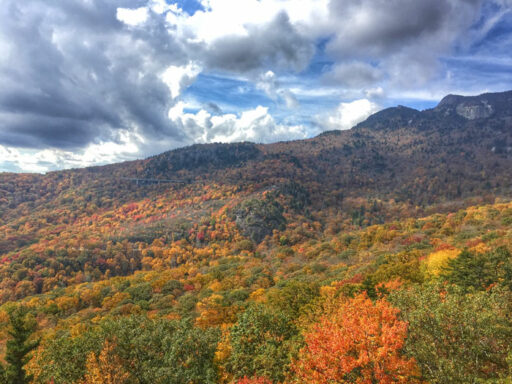 It’s really an amazing piece of history. It’s one of the most complicated concrete bridges that’s ever been built. It floats like a s-shaped shelf out from the side of the Grandfather Mountain’s slope, hugging the curve of its face. When we were kids my dad always made such a big deal of it was we drove over. “Here it is!” he’d say as we approached Linn Cove. We weren’t exactly sure when it would creep up on us but all the sudden the mountain would just fell away and we knew we suspended on the side of the mountain. I guess most people wouldn’t even bat an eye at it when they drove over it, mostly because the view is so spectacular and that’s what people are looking at. You can see almost 100 miles on a clear day, all the way to downtown Charlotte. There’s a long story behind how it was the last missing piece to having one long continuous parkway. My mom is a walking history book so I’d recommend you just drive it with her as a tour guide but since that probably isn’t possible I’ll just tell you a few amazing facts. The viaduct was built in a way so that the actual mountain wouldn’t be touched. The only trees cut down in the construction process were the ones under the bridge. All the huge concrete pieces were created at a site nearby and not one piece of the puzzle is the same. I guess I never appreciated how much of a marvel it really is until now. The viaduct swoops and swerves, curves in such a nice manner that it looks like it could have been just a piece of ribbon draped onto the side of the rocky mountain slope. Here I zoomed in on my photo above so you can see it: 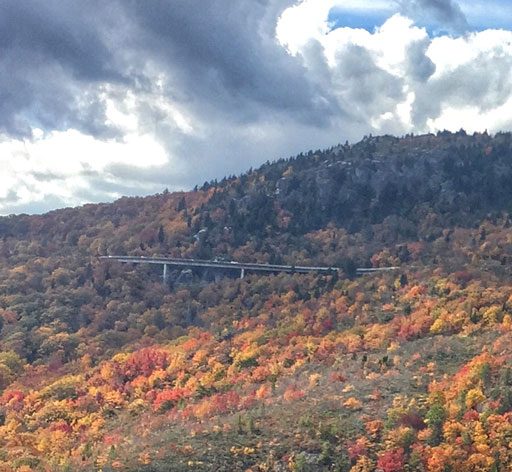 There’s a nice Visitor’s Center at the Viaduct where you can read about the history and start a short hike that takes you under the structure.

The day we left Linville Boo and I decided to take the Parkway home. We had the whole day ahead of us which is a crucial ingredient to our adventure. Why? Because once you get onto the Parkway you are pretty much committed. There are no stores, gas stations, stoplights or billboards. You never know what kind of weather you are going to hit or what the visibility is going to be. And that’s the fun of it.

It’s a slow drive (45 mph speed limit) with countless overlooks and vistas. Boo and I stop at almost every single one. She checks out people’s license plates to see where they are from and I snap photos of the scenery. We’ll read any historical markers and “people-watch” from the car. We usually stop at the visitor’s center too…you can get the dated stamp for each location in a journal or NPS Passport book. From Linville to Asheville it’s about 70 miles and it took us almost fours hours because of all our stops. There’s a lot to stop at on this little span including the Museum of NC Minerals, Crabtree Falls, Mount Mitchell, Craggy Gardens and the Folk Art Center: 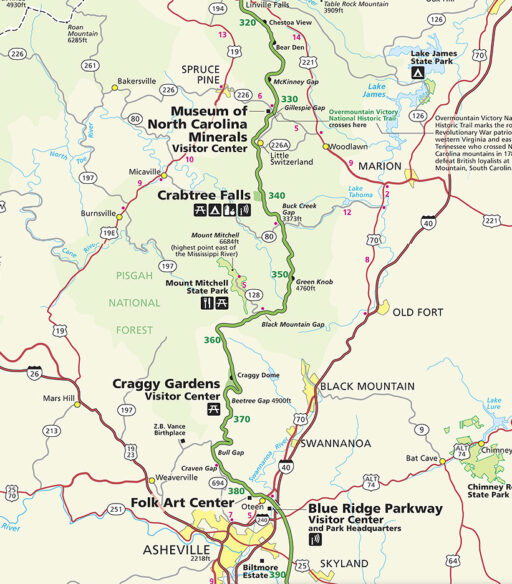 Here’s a shot from Black Mountains overlook (elevation 3,892). It was so windy we could barely stand up…and Boo loves that kind of wind. There was lots of color and you can see thick, blankety clouds forming and moving quickly south towards Mount Mitchell: 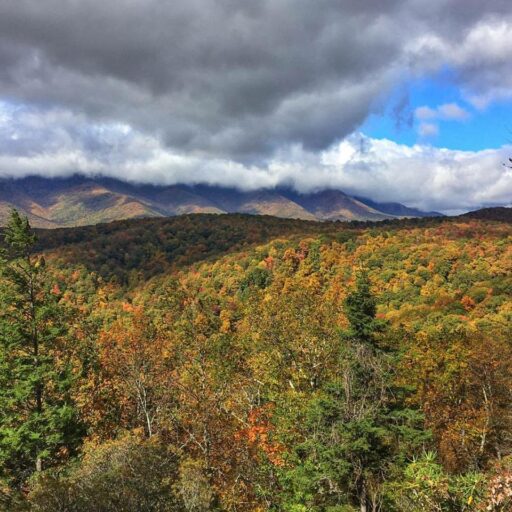 We kept driving and as the elevation increased the fall color just got better and better: 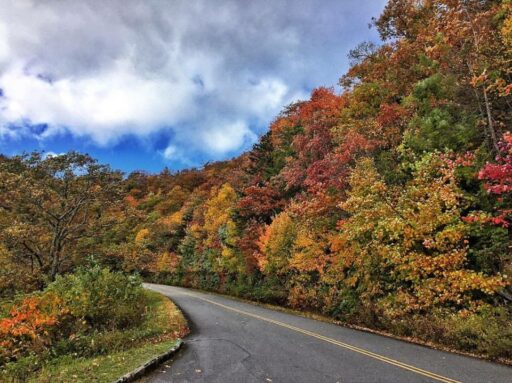 We decided to pass by Mount Mitchell because it was so foggy and windy. If it’s a clear day I definitely recommend the trip there. It’s the highest peak east of the Mississippi! (Click here for photos I took there last year.)
By the time we got to the top of Craggy Gardens the wind was insane. I even turned off the music we were playing so that I could just concentrate on the road and parking. We sat and watched people getting out of their cars and the couldn’t help but giggle at some of the reactions to the force of the wind. People running and struggling with umbrellas, raincoats turning little kids and smaller adults into kites, everyone underdressed for the cold. When the wind died down just for a few moments I was able to take this quick video of the flag:

The whole tiny visitor’s center building shook and the windows were creaking. The wind gusts were at least 45 mph. Boo and I stood in the bathroom underneath the building watching through the windows as branches flailed and beat against them, the wind screaming and howling. “This is awesome!” Boo must have said 500 times. I just nodded and watched with my eyes wide wondering how well the building was attached to the side of the mountain!

Once we got back down to a lower elevation it was beautiful again. It was like we were driving through completely different climate systems. When the Parkway reached Asheville we stopped at the Folk Art Center. Artist Warren Carpenter was demonstrating his wood turning process in the lobby. Sienna was so interested in his work, asking so many questions, that he started a new bowl for her. When he was finished he motioned for her to walk closer to where he was standing and he told her he was giving her the bowl. She was so moved she cried. It was pretty cool. 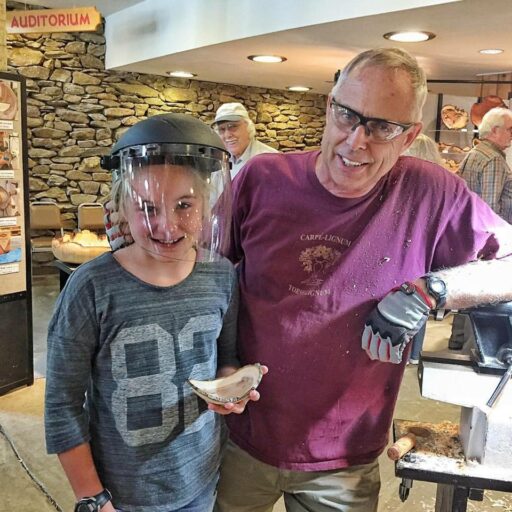 It was almost 3pm by the time we left the Folk Art Center. We decided to stop at the Biltmore to grab an early dinner before heading back to Bryson City. It was kind of overcast and rainy and still extremely windy so we grabbed our windbreakers and headed for the bus. After we ate at the Stable Cafe I let Boo run around the gardens and I just followed her lead. Watching the storms forming in the distance on the back terrace: 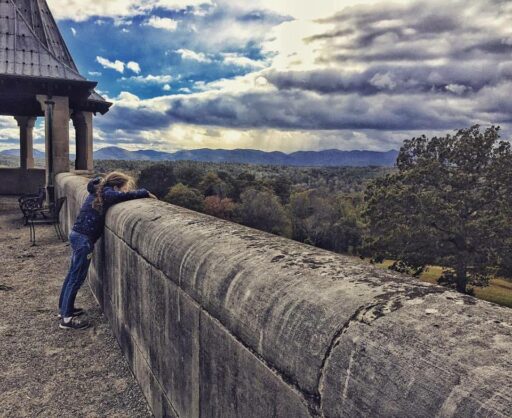 This is my favorite Japanese Maple at the estate. I love all its gnarled weeping branches. Another day or so and it will be a dramatic bright red. I need to go back and see it again soon. 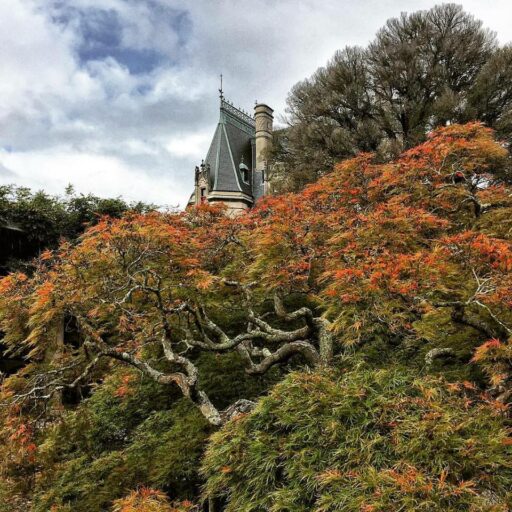 The mums in the garden were incredible. Mums for days. They had an entire row of all the different colors and varieties laid out. This looks like a quilt: 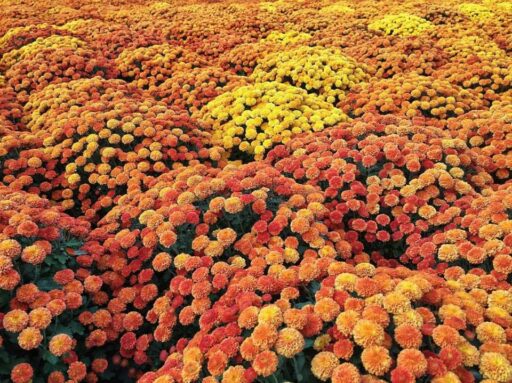 The Biltmore view hasn’t changed yet: 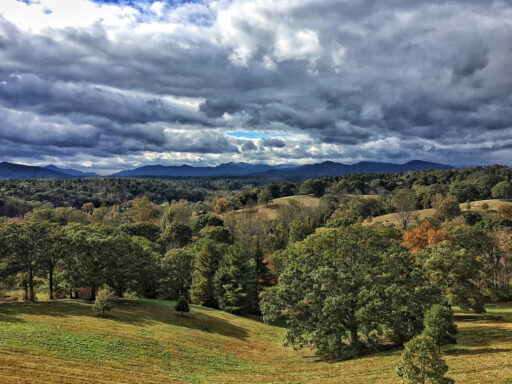 That’s why I call it chasing fall color. I’ll be back there soon to check on it too. 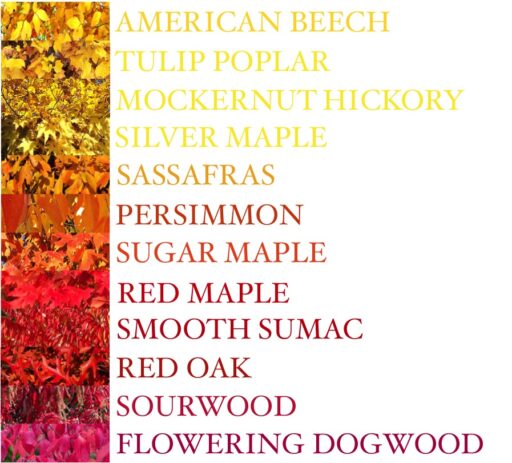 Along the ridges and in the valleys there’s a hint of things to come.
The hills are beginning to catch fire.
Autumn’s glory is spreading across the land.
The back roads are calling.
The greatest show on earth is just around the corner.
-from These Storied Mountains by John Parris

Fall is definitely my favorite season. The leaves have pretty much peaked up the Blue Ridge Parkway near Boone and Blowing Rock: 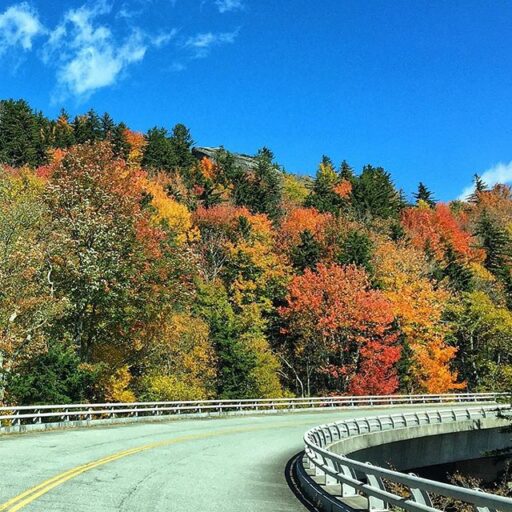 I read in this week’s Smoky Mountain News (in an article by naturalist Don Hendershot) that the red color is produced by cool nights (which stops the production of chlorophyll) followed by sunshine which: 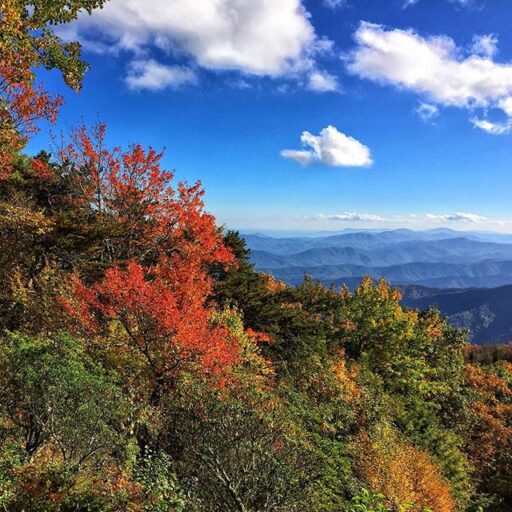 A sunset view at my mother’s house in Linville, NC: 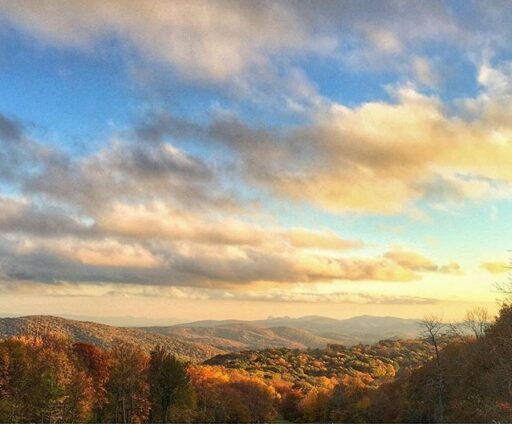 A walk with Max in the Pisgah National Forest: 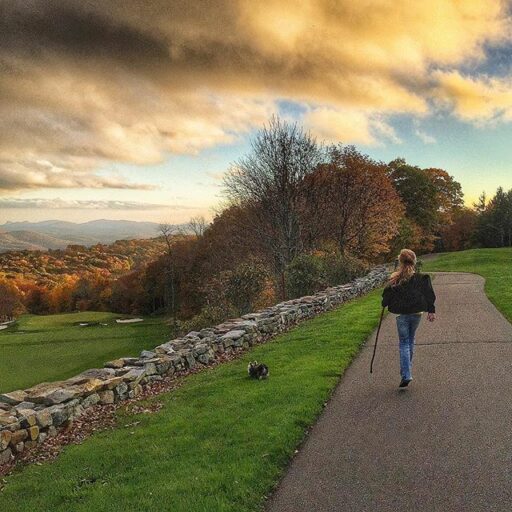 I feel like last year I wasn’t so in tune to the fall colors and in a blink of an eye the leaves had turned and fallen. This year I’ve been looking almost daily and we’ve taken family drives up the parkway each week to see the progression. It’s really interesting to see how the elevation and temperature changes can produce such a different array of color within just 60 miles, and how the color starts to change at the tops of the mountains and works its way down to the valleys over time. The parkway has plenty of yellow and orange color right now all over. Those are the silver maple, mountain maple, American beech, beech basswood, tulip poplar, hobblebush, pin cherry and hickories. A little chart I made…I’ll keep adding to it over time: