Menu
You are here: Home / Archives for House on Hospital Hill

I’ve been looking for an antique circus sign for years and every time I’ve found something it was out of my price range or wasn’t for sale. I decided to make one myself this weekend. I get so much enjoyment out of just sitting and painting letters. Sign painting can be so therapeutic. I lose track of time. I’d rather sit and paint than almost any other activity I can think of. I worked on some of the gold liquid gilding today: 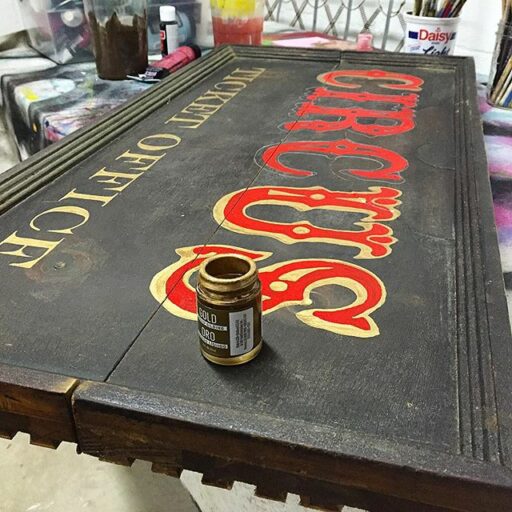 The wood background was made from two drawer fronts salvaged from an old dresser I found in the train depot. I couldn’t bear to throw them out so I asked Brett to attached them to a piece of wood so they would look like a framed piece of wood. I love the way it turned out. I’ll post the finished sign in a few days and upload the template I created for it.

Another project from this weekend was fixing up this old sign I found in the attic. The family that lived in the house before us owned a pharmacy in town for years. Maybe that’s what this sign referenced. It was in pretty bad condition so I just added a wash to some of the letters to make them show up again. It’s going to hang above the opening to our living room where you can see the town lights: 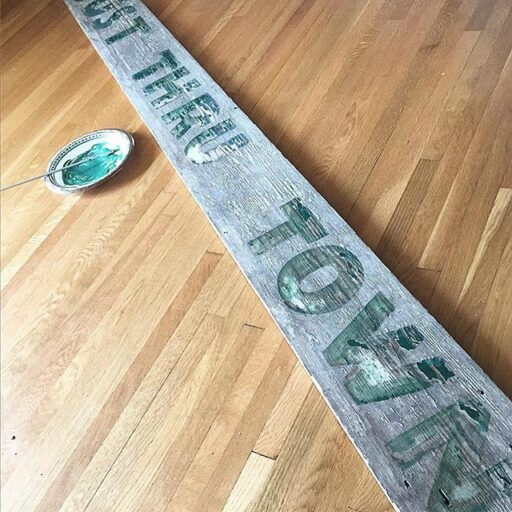 You can find more posts about the House on Hospital Hill here.

Yesterday Brett and I installed this pea gravel patio: 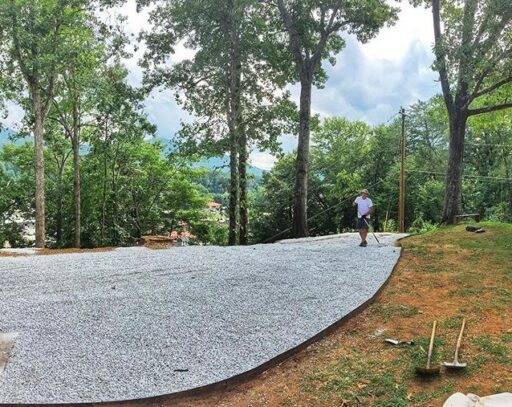 I broke every single rule for putting down pea gravel but I’ve never like following the rules anyways. We didn’t put down weed barrier (more trouble than it’s worth) and I didn’t even outline the area completely until after the gravel was being dumped. I didn’t even calculate how much gravel I needed…basically just ordered a whole truck load because when you get it straight from a quarry it doesn’t really matter. Half a load is almost the same as a full load, because you are paying for the truck regardless.

The truck driver we’ve used the past few times can dump the gravel with so much precision it doesn’t even really count as “installing” a patio. He did all the work: 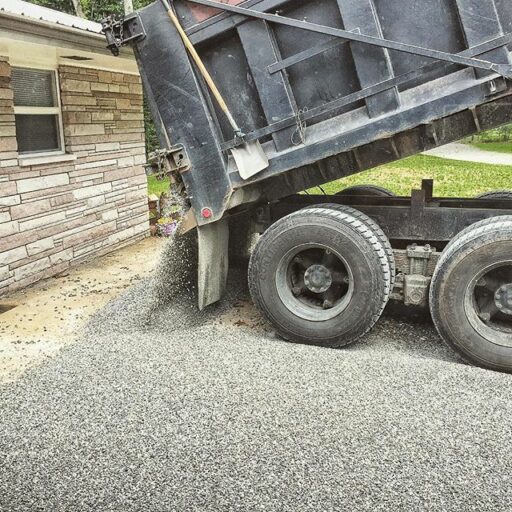 Since we put in a driveway and parking area to the back of the house it was easy to get the entire truck around to the front: 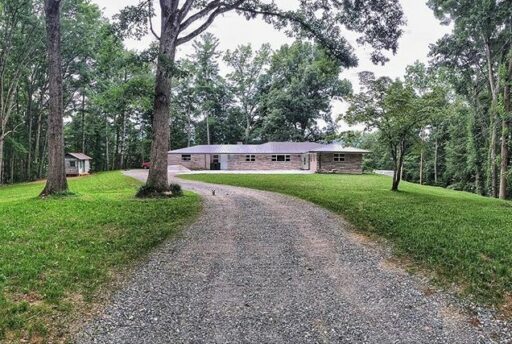 We used a metal border for now and one day might add stone, but the metal border was salvaged from a demolition and it was free so that met our budget. Now we just have to get the grass to grow thick and lush right up to it: 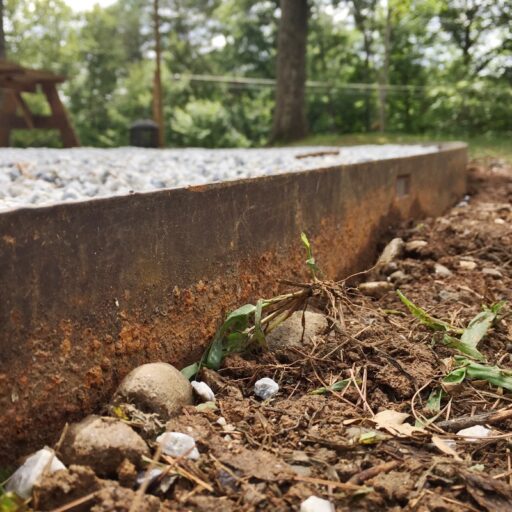 The table we got at a yardsale for just a few dollars and Brett rebuilt the benches last night and stained them so they are still in the garage drying: 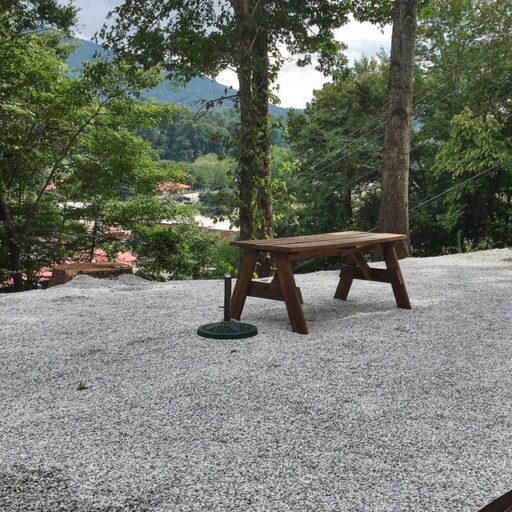 It was raining last night but that didn’t stop Boo from trying to roast a marshmallow. I was able to get the fire going long enough to melt enough marshmallow for one s’more: 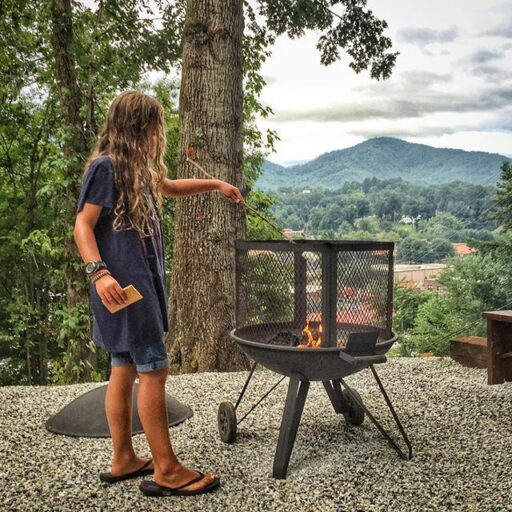 It would have been nice to have had the patio earlier in the summer but we had to take out a really big tree first that was at risk of falling and making a big mess. Now I just need some globe lights to string across the yard and maybe Brett will build me a really long farm table.

Stay tuned for the depot project that we are working on through August…there will be pea gravel used for that too!

One thing there is never any shortage of here in the mountains: old wood.

A few things Brett has made for the house using salvaged wood: 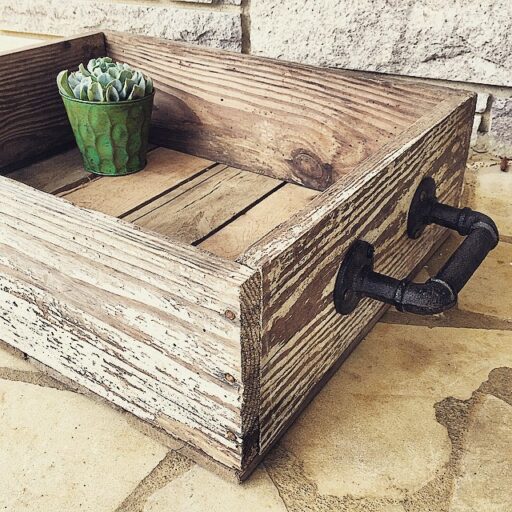 2. A coat rack for the hallway. The hooks were from Lowe’s.  The purpose of this was to keep me from  leaving all all my stuff on the dining room table. It worked: 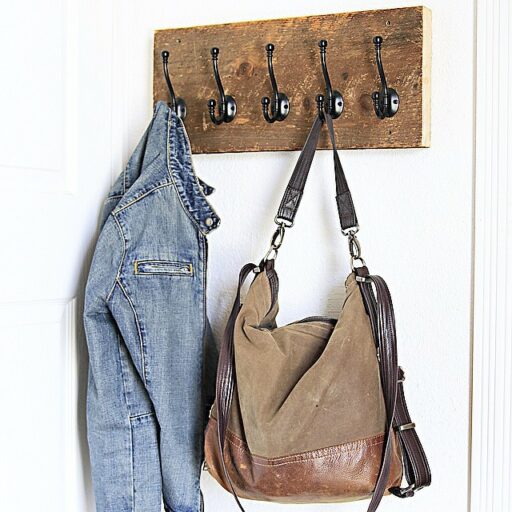 3. These chairs were made a while back out of old wood pallets: 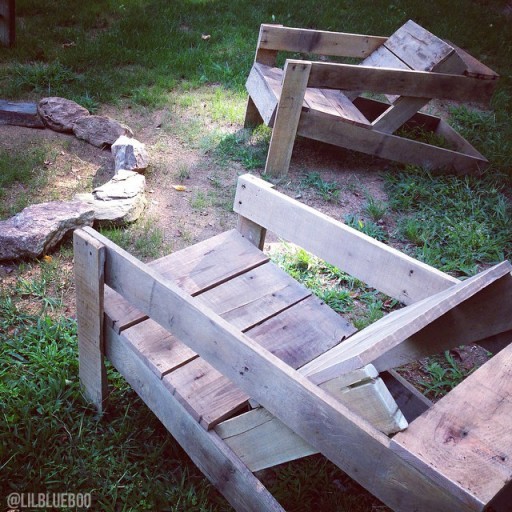 4. And of course there is the entire building of Bryson City Outdoors.

See what else we’ve done to the House on Hospital Hill here.

Note: A potential problem with old wood is that there are usually bugs to accompany it. A few ways I’ve gotten rid of them:

1. Make a concoction of peppermint oil and water and spray often until they disappear.

2. Still there? Seal the wood in large, black contractor trash bags and leave out in the sun on a really hot day. As long as the temperature inside the bags gets up to around 150 degrees all the bugs should be dead.

3. Still there? Buy boric acid powder and mix a solution with water according to instructions. Pour small amounts into the holes where the bugs seem to be originating from. Wipe away any excess. Once wood is dry wipe the area clean again to get rid of any remaining boric acid.

4. Still there? Adopt them.