Menu
You are here: Home / Archives for NVS

At my sister’s house I found these sitting on a shelf: a large box of cards my parents used to set dates with each other when we were growing up. 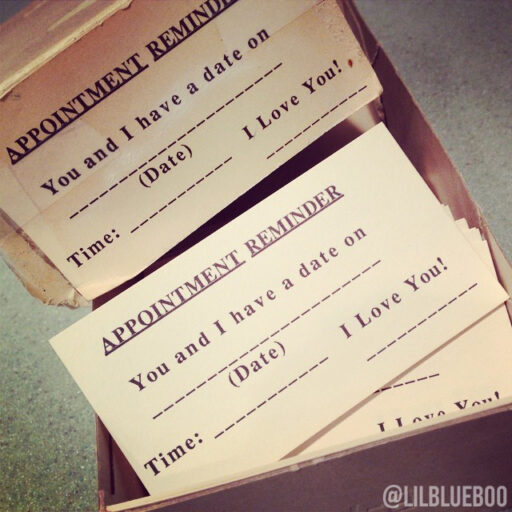 The box only has a handful of the cards left…..they went on a lot of dates.  I remember seeing these on my parent’s bathroom vanities. I can still picture each of their handwriting.

I’m back from my short trip to Florida. It was a very short trip because I promised Boo I’d be back by this morning to chaperone her class trip to the zoo. I wouldn’t have missed her trip to the zoo for anything…..I was right up there in the front with all the kids “oohing” and “ahhing” over the awesome little owl pellets with little mice skeletons in them too….)

I brought home this photo that my mom had in one of the cabinets. It was taken around 2002.  It’s a photo of my dad, Diesel and I. My dad would ride Diesel around the neighborhood in his beach cruiser basket introducing him as his “granddog.”  And my mom would make me drink freshly squeezed orange juice: 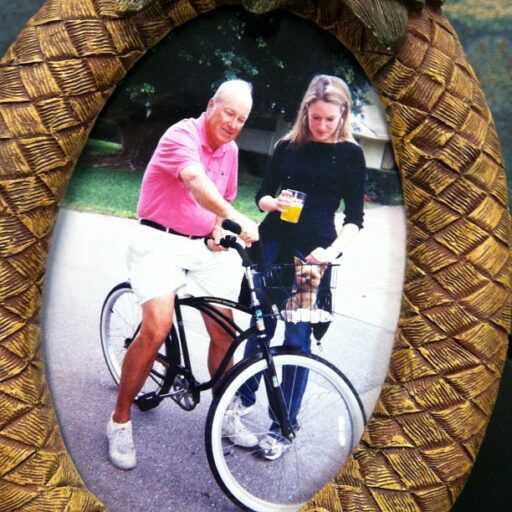 The reason I was in Florida was because my dad was being inducted into the Quail Ridge Sports Hall of Fame.  The honor of the induction was presented to my mother: 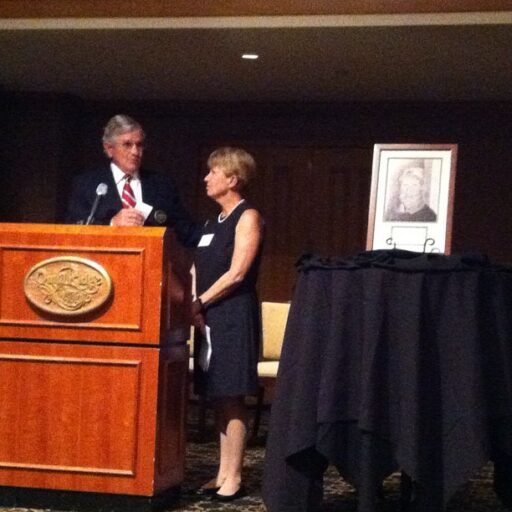 My mom did an amazing job during her speech…..she reduced the room to tears multiple times. She ended with the idea that maybe my dad had a premonition about the USGA deciding to ban the long putter starting in 2016. My dad loved the long putter. We even buried him with his long putter.  She joked that if my dad were here…. there would be no shortage of his new advice on reintroducing the short putter to the game….. to all those people he had convinced to switch to the long putter in the last 10 years…..

She was introduced by Kevin Hammer, a friend of my dad’s who was with him when he died.  Kevin read a list of things he had copied down from my dad’s office…..notes that my dad had hung around as reminders to himself….on the lamp, on the wall, on the door:

have a great attitude

play your own game

play one shot at a time

commit to every shot

play with no expectation

never ever give up

During her speech my mom mentioned about how I was diagnosed with cancer just a few months after dad passed away. On the ride home, giggling, I told my sister:

And in almost perfect unison we both chimed in (only because my brother wasn’t there to do it for us):

“….and the experiment failed.”

The other inductee that night was Ches Riddle. My dad would have been so proud to have been inducted with him. After my mom’s speech, the whole room was in tears…..and then Mr. Riddle’s speech lefts us all in stitches. He told a story about how he once bought a hot air balloon and took his wife up with him…..but he had a hard time getting the balloon to come back down to earth because of all of his wife’s hot air…..you had to be there.  His wife moved over a foot when he sat back down. It was cute…..and it made my mom laugh harder than I’ve seen her laugh in a long time. So I’m thankful for that.

From the Charlotte Observer last Tuesday: 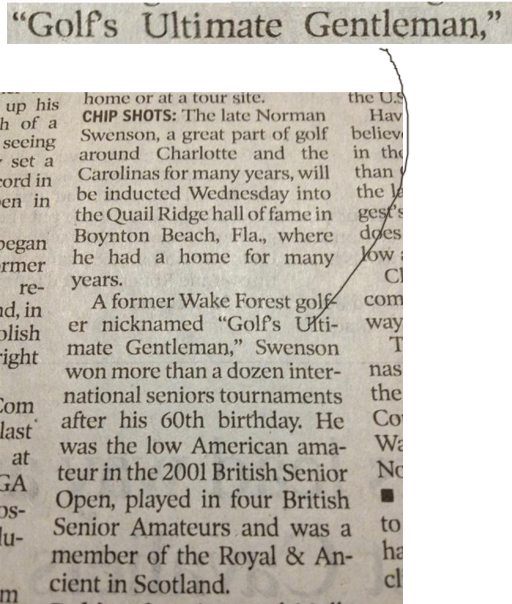 I love that nickname.

It makes me so proud.

Dad was truly a gentle man.

Totally random, but as I’m writing this post Boo just asked the following questions…..so I had to document them somewhere and this seems like a great place….you don’t mind, right?

END_OF_DOCUMENT_TOKEN_TO_BE_REPLACED

This is a follow up to the post I wrote about the contract my dad wrote for my underage drinking. This was a contract signed between my parents and I in 1993 when I got my license and a new car. I love that it was amended after 2 speeding tickets (they never revoked privileges for those…..but I guess a third would have been too much).

1. A few contracts I signed with my parents said “CONFIDENTIAL” on the top…..this one was not marked, so I’m assuming it’s okay to post.

2. I never had any desire to carpool other people’s pets around. I don’t know why that was such a concern.

3. The cell phone my dad installed in the car for me was AWESOME…..until he got the first bill and it indicated that at 2:30am I was making calls from a field party in Union County.

4. Once during college I left my sunroof open overnight during a rainstorm (probably the same night I got caught drinking).  It soaked the entire interior of the Landcruiser and resulted in the seats dry rotting. I wonder if that would be considered a violation.

5. I did use a music CD in the car for the first year, I didn’t think that fell under “radio” technically.

6. It would have been awesome if this contract included attending church for $20…..I still lived at home and went to church regardless of whether or not I wanted to. 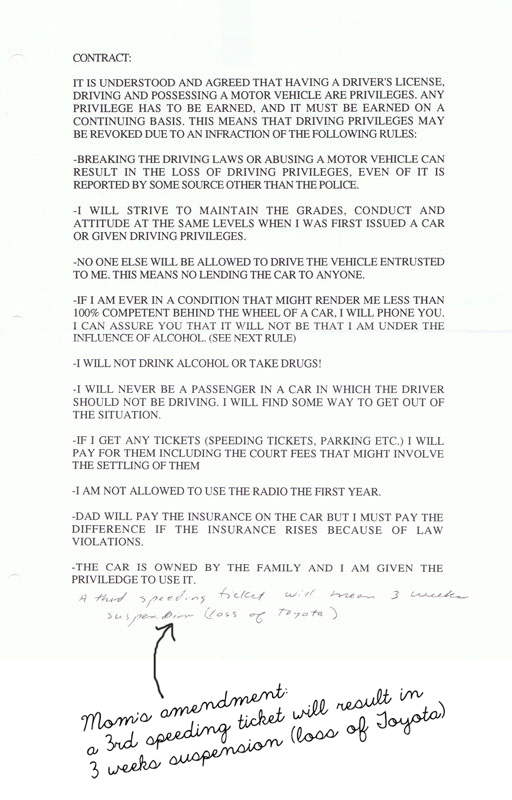 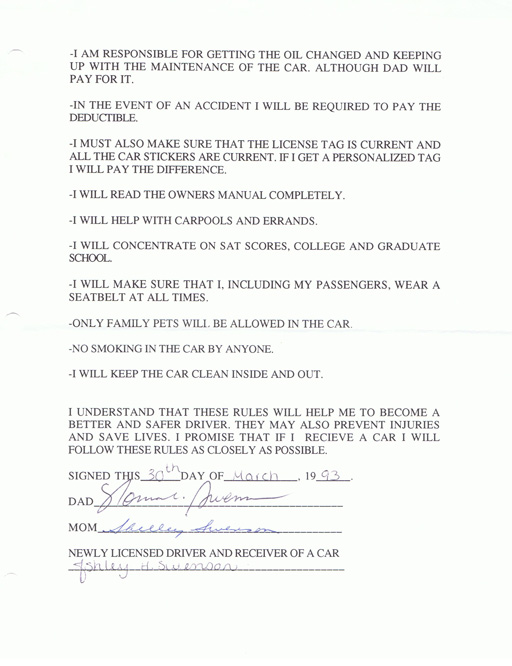 P.S. Mr. LBB said last night “these really make me miss your dad”…..yep….me too. My dad was always leaving everyone little notes and advice. I found another one today where he had browsed one of my financial statements that I’d left out. He had written on it: DID YOU KNOW THEY ARE CHARGING YOU FOR CHECKS??? BE CAREFUL!!!!