Menu
You are here: Home / Archives for Friends and Family 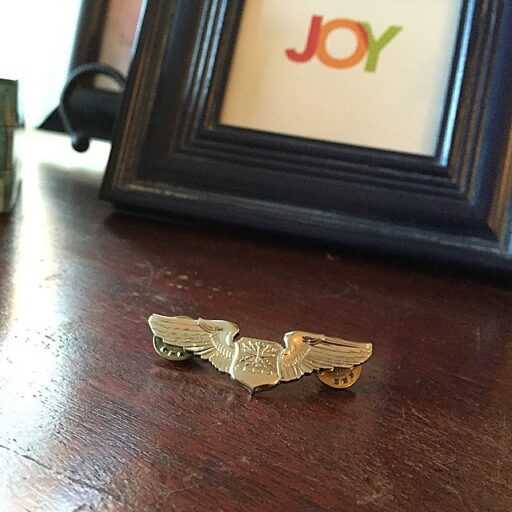 They were a special gift to Boo last week after she said the pledge of allegiance at his retirement ceremony.  Imagine all the missions those wings have been on.  Boo was brought to tears when Gene gave them to her.  She also teared up throughout his whole farewell speech.  We all did.  It was so moving, and funny, and moved us all from tears to laughter to tears.  I asked him for the transcript and have shared excerpts of it throughout this post.

First of all, Gene has the best sense of humor. He had us all laughing at the start:

“Not sure I’m on my A game. Christy changed my yogurt and it’s the “fruit on the bottom” kind. Would it kill them to go ahead and mix the dang yogurt. Program note…for my fans, I will not be playing the guitar during the ceremony, sorry.  For my family, I will not be river dancing. I’m sure you are all relieved to hear that.”

I was really bummed that there wouldn’t be any irish dancing….Gene has mastered his imitation of Michael Flatley. 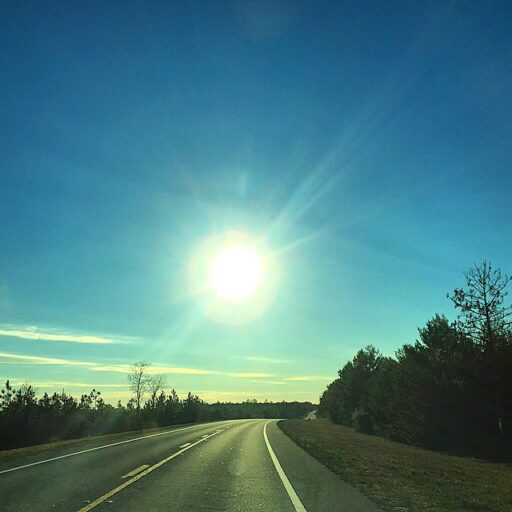 The morning of the ceremony we were whisked off to a really big hanger at Eglin Air Force Base and given strict instructions about photography.

Me: So…no selfie from the cockpit?
Man-with-official-looking-badge: No.

My nephews told me that if I took an unapproved photo men would come out of holes in the ground to tackle me within seconds.  Is that true? I love secrets! 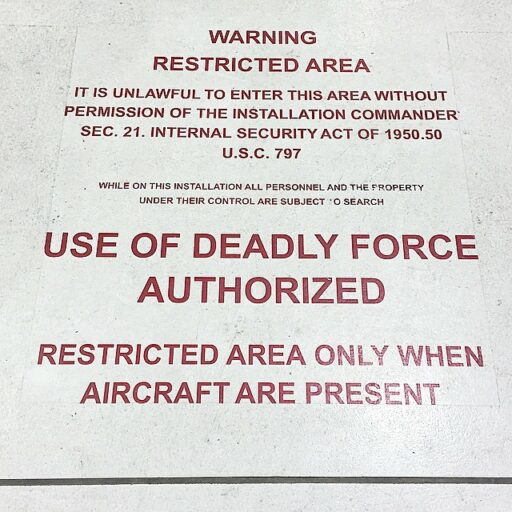 Boo got a personal tour of the F-35 from her Uncle Gene who has flown quite a few Air Force planes in his career. I learned that the finish of this plane is top secret…but I’m pretty sure the concoction may include Annie Sloan “Paloma” chalk paint: 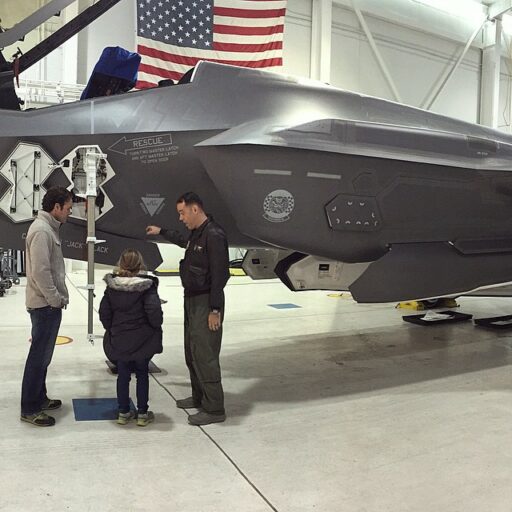 “This is truly a bittersweet moment. I didn’t realize how bittersweet until the day finally arrived. It is scary and exciting to start a new chapter in our lives but at the same time when I stop to think that I will no longer be on active duty in the Air Force that I love it is a bit hard to take. Almost exactly 22 years ago I was driving cross country out to Vandenberg for Missile training. Then 18 years ago about an hour away at the Pensacola Naval Air Museum I was getting my wings.

As I was putting my notes together I was listening to some tunes and a song by the band “Third Day” came on, it is called “This is who I am.” The first verse is:

You see, this is all I ever wanted to do in my life. I take that back, I would have liked to have been the lead guitar player in KISS, but that’s not going to happen so… In 1986 my fate was sealed when Top Gun came out. I saw it 16 times in the theater went to the Army/Navy store and bought a flight jacket and a motorcycle and was ready to go. I think I even used the line on Christy when we met that “if the government trusts me, maybe you could.” It probably didn’t sound as good when I said it…

I’ve clearly passed that gene on…when Duncan was about 18 months or 2 years old one day he was in the car with his grandmother Kathy going by Barksdale AFB on I-20 and some airplanes flew over the car. Kathy said “Look Duncan, some F-16s or something.” Duncan’s reply was   “A-10 Hogs Grandma, A-10 Hogs!” I think his first three words were Porsche, Dada, and A-10 Hog.

Seriously though, I have truly lived a dream.

This is a bitter adventure, if it must end so;
and not a mountain of gold can amend it.
Yet I am glad that I have shared in your perils – that has been more than any man deserves.

The ceremony was held in the Air Force Armament Museum at Eglin. We got there really early and Boo had a chance to practice her pledge: 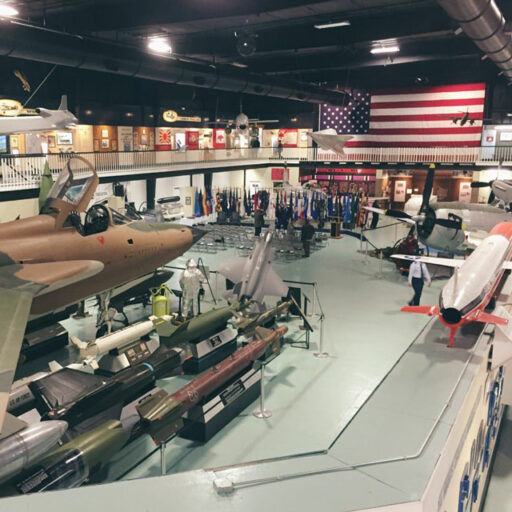 “For as long as I can possibly remember I wanted to fly in the Air Force, but, like most people in uniform, I never did it for me.

I never did it to get medals or free meals on Veterans Day.   I did it so others didn’t have to. I did it because I believe in the greatness of America, for that flag, for the Constitution. I did it to make my mom and dad proud, and to confirm that they raised me to make a difference.

Christy and I were fortunate to attend the Special Operations Warrior Foundation dinner a few weeks ago. They raise money for SpecOps warriors who have paid the ultimate price for their country. AFSOC/CC Lt Gen Heithold spoke about something interesting. We are the real 1%. There are 300 million people in this country and only about 3 million men and women serving in the military.

We have been at war for more than half of my career and this war is not going away anytime soon. A few months ago we got a briefing on ISIS. We saw a propaganda video that had 6 to 9 year old kids being trained for and shouting Jihad against America. All of you in uniform and those who will be continue to answer the call, I for one am grateful.

I get it honestly.  On the 7th of October 1780 Arthur McFalls and his brother John fought in the Battle of Kings Mountain in the Revolutionary War, on September 19th, 1863 his grandson and namesake Arthur, my great-great grandfather, was killed fighting with the 58th North Carolina Regiment on the field of battle at Chickamauga in the Civil War. My brother David left our home for the Navy when he was 17 years old and served on the USS Nicholas. My uncle, Lt Col Robert Abernathy was a fighter pilot. He flew 3 of the airplanes in this room. The P-47, F-105, and perhaps the most legendary fighter of all time the P-51 Mustang. I idolized him growing up as he would regale me with stories about shooting down ME-262s, strafing boats along the Rhine and flying Thud Ridge in Vietnam.

Having this ceremony in this room, surrounded by these planes, with the mighty BUFF outside, is a perfect way to end this chapter of my life.”

That’s the mighty BUFF, the B-52, and Gene back in the day.  Boo got to see one up close at the Air Force Armament Museum. Any plane that needs wheels just for its wings is huge. END_OF_DOCUMENT_TOKEN_TO_BE_REPLACED

Visiting my family in Charlotte, Brett and I went to the mall today. It was like being a fish out of water.

Ok just kidding she didn’t ask me that. She just walked away.

After escaping the mall, we spent the day salvaging a few usable items from a house that is being torn down.  Everyone’s trash is another person’s treasure…especially if you like old stuff like I do. Brett found some old hardware and fixtures, and I found some old newspaper articles in the attic. 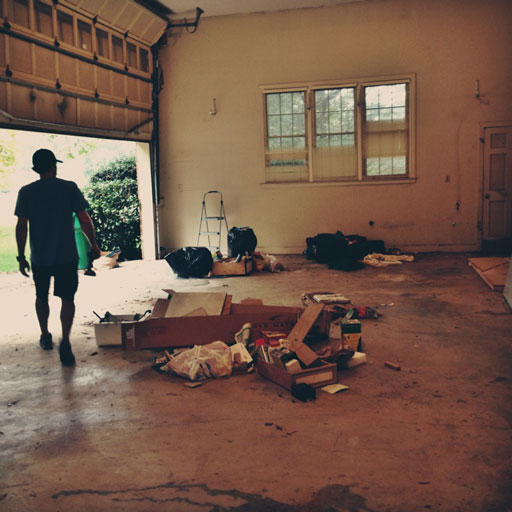 Tonight we went to a new friend’s house for dinner, and I warned Boo ahead of time: we are going to a fairytale house, with a garden just like the Secret Garden, gargoyles and passageways, and the library looks just like the Book Thief and it has a staircase just like the Biltmore house. And you should have seen her face when we walked into the library…it was just like when Liesel sees the library in the mayor’s house in The Book Thief.

Boo on the stairs being followed by a Bengal cat: 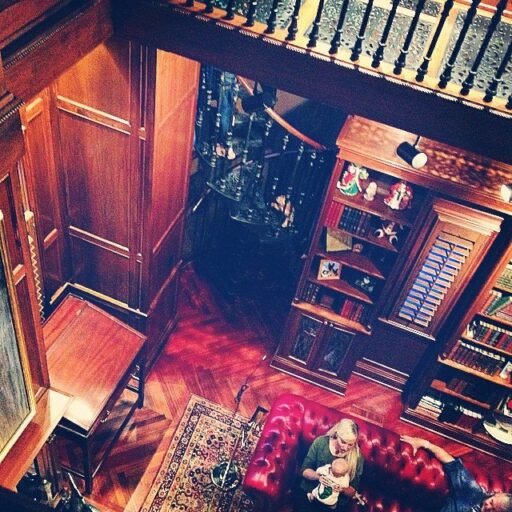 We ate dinner with our friends Nick and Suzie and Boo asked if she could be excused from the table early, so she could spend time in the library. I’m not sure I’ll ever hear that again. She found The Boxcar Children on the shelf and she was told she could borrow it. Suzie also had this old mail order catalog she’d found and it was in perfect condition. Circa 1915 this catalog would have been right around the time of the Titanic.  The mail order form was still in the center of the catalog, making me want to fill it out and send it in with my 89 cents. 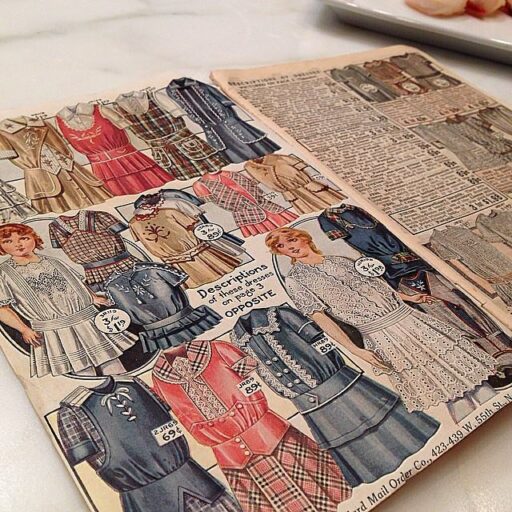 And yesterday we spent some time with my brother and his family. It was my nephew’s birthday. And I actually have a photo of me and my brother for once, although it does look like I’m trying to get away from him, but that was only because I was trying to take a photo with my nephew Carter: 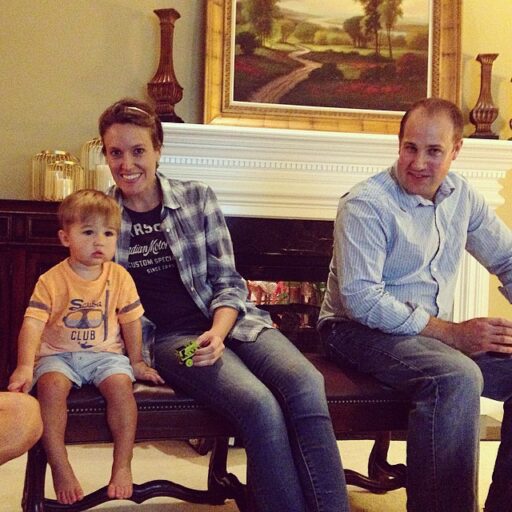 And since we are staying with my sister we’ve spent a lot of quality time with my little niece Leighton.  I get to bathe her each night and we all take turns feeding her and she’s just the sweetest baby. I might just steal her..because I’m pretty sure I’m her favorite person in the whole wide world: 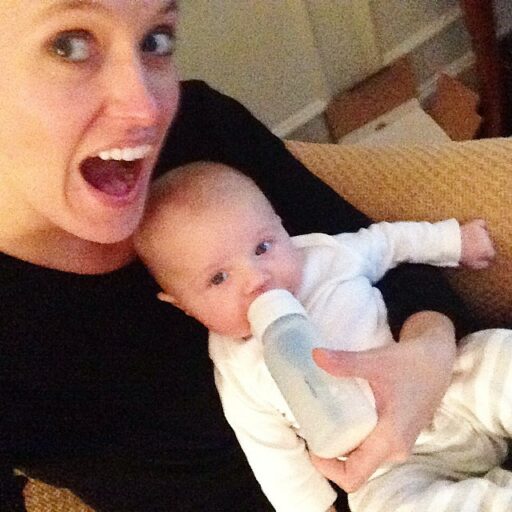 Speaking of old stuff I picked up this really old metal globe last week while thrifting/antiquing. Even my thrifty hubby thought it was a find we couldn’t pass up. Not that we have the space for it right now. 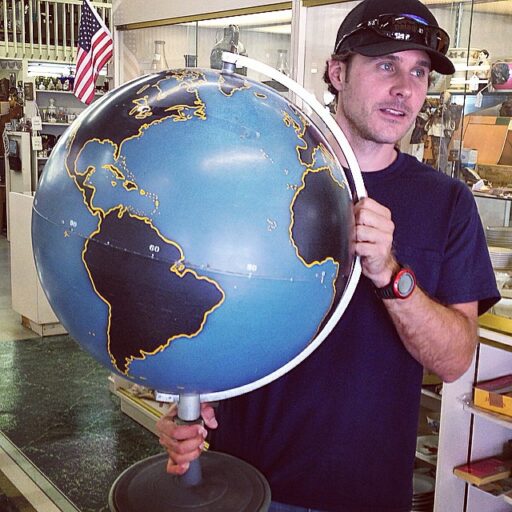 And then there’s just this: 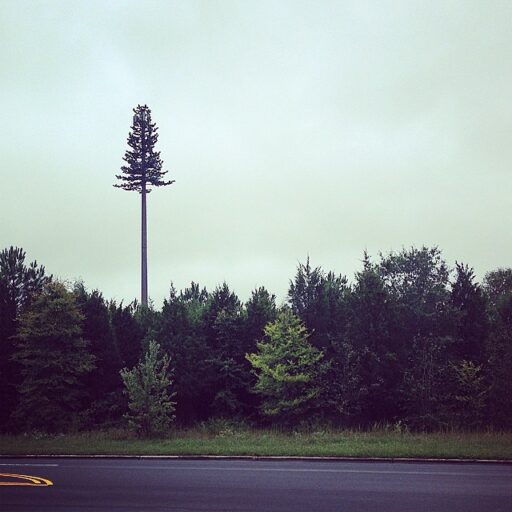 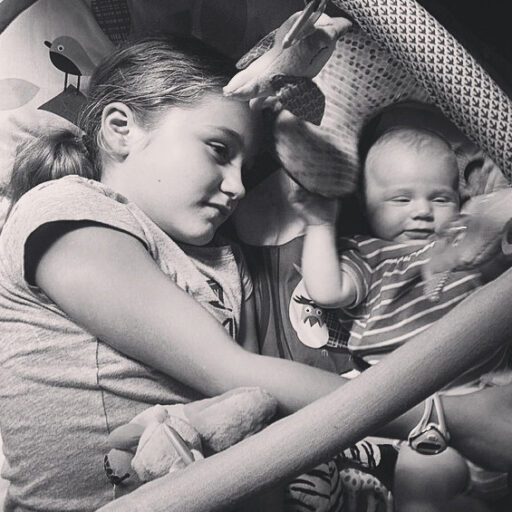 I had a Pinterest party recently for a few close friends I hadn’t seen in a while. 4 projects from Pinterest….in 2.5 hours. 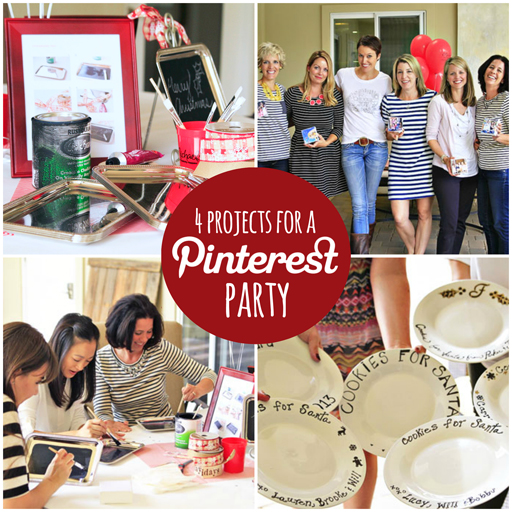 I thought it would be fun to carve out a morning for them to try something new: 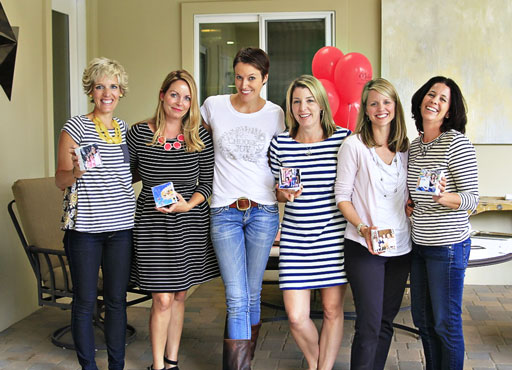 Here’s what we made, along with four PDF downloads if you want to have your own party: 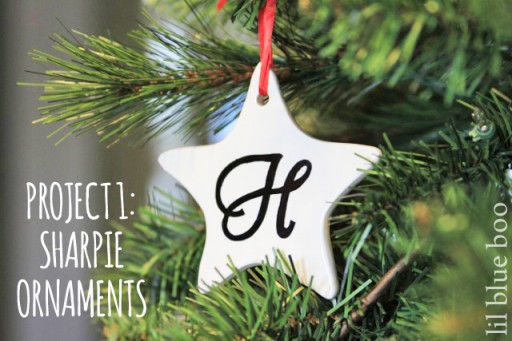 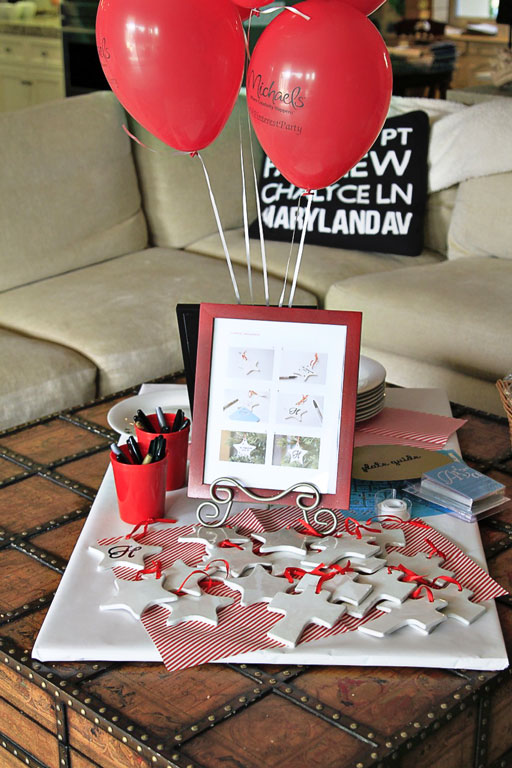 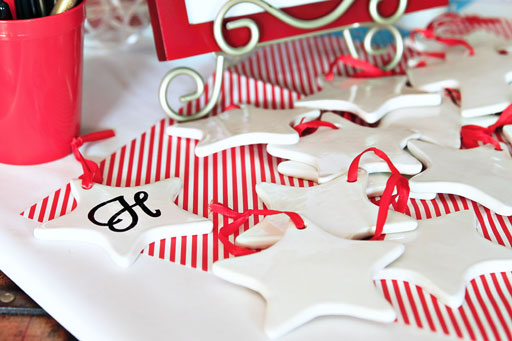 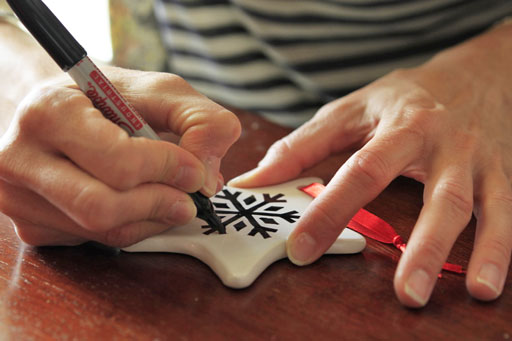 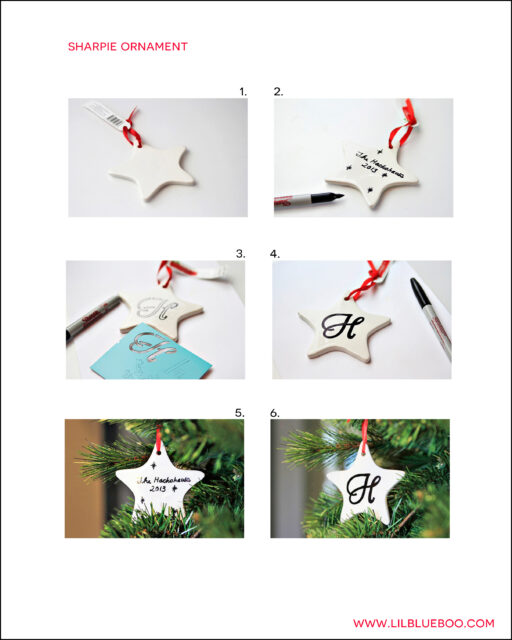