Menu
You are here: Home / Archives for Random

You know when people say “we’re having a party later….you should stop by“……usually thinking the other person won’t show up?

It was at our neighbor’s house behind us and I’d never met them before. I decided to go and jokingly complain about the loud music…..since that’s why they stopped by in the first place: to warn us about the loud speakers. END_OF_DOCUMENT_TOKEN_TO_BE_REPLACED

Oh how I love looking through my Google analytics. A few random searches that brought people to Lil Blue Boo in the last 30 days (in italics):

you make fun of me being on Facebook so much when you must be on as much to notice.
Dang, someone is going to get schooled…..

got a booty implant before and after pics.
I think I’ve Googled that before.

END_OF_DOCUMENT_TOKEN_TO_BE_REPLACED

Me: It’s kind of sad, but if I had died last October, think about all the random crap of mine you would have had to get rid of.
Mr. LBB: I probably would have just sold the house.
Me: You’d still have to move all the stuff. Unless you just abandoned it…..like Pompeii.  Then people would come and photograph our abandoned house.
Mr. LBB: Yep.
Me: If anything happened to you, you know what would happen? I’d be like: Anyone want this ONE drawer?

It’s true. Mr. LBB keeps nothing material. He has one little area in the house where he keeps his things…..a few hats, a phone charger, sunglasses, a drawer with some odds and ends: 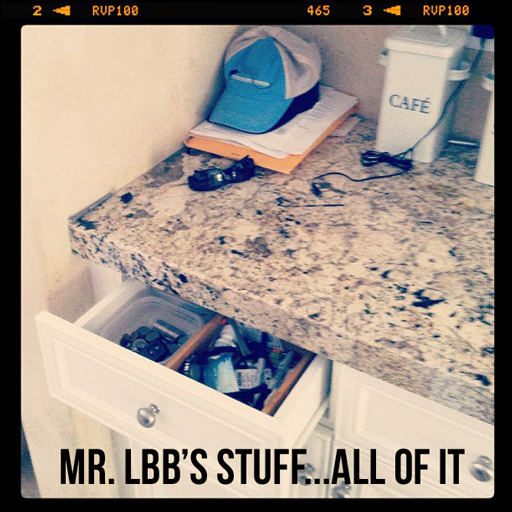 He only uses 2 of his bathroom vanity drawers….I’ve generously filled the other 4 for him (and we each have our own vanity….so that means I have a total of TEN drawers).

I think he used to have way more stuff…..but I gave it all to goodwill. I didn’t want anyone to think we were hoarders.*

*Hoarding might be genetic. I helped my mother organize 4,000 cassette tapes last summer…..all copied from CDs. (We didn’t organize the CDs…it’s common knowledge that if you copy them onto cassette tapes, the CDs become obsolete.)

Note: For anyone keeping count, I just realized all my recent posts have been depressing…..dead dinosaurs, girls dying at Pompeii and their lack of carpets, it taking 4.9 years for my hair to grow back, my fear of cars, and creepy babies……so don’t forget the corn on the cob post and national doughnut day…..it evens out 😉 Oh, and I met The Gambler.